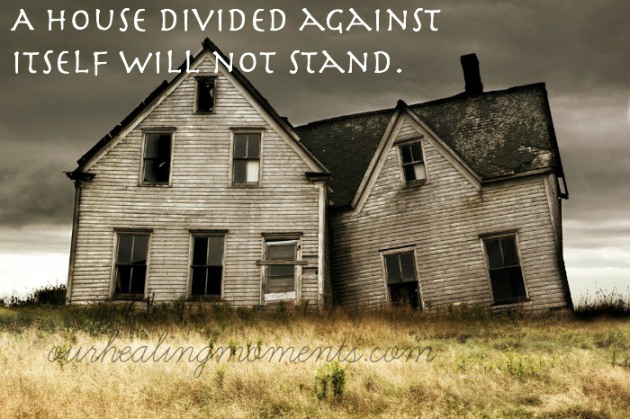 Matthew 12:22-29
22 Then a demon-possessed man who was blind and mute was brought to Jesus, and He healed him, so that the mute man spoke and saw. 23 All the crowds were amazed, and were saying, “This man cannot be the Son of David, can he?” 24 But when the Pharisees heard this, they said, “This man casts out demons only by Beelzebul the ruler of the demons.” 25 And knowing their thoughts Jesus said to them, “Any kingdom divided against itself is laid waste; and any city or house divided against itself will not stand. 26 “If Satan casts out Satan, he is divided against himself; how then will his kingdom stand? 27 “If I by Beelzebul cast out demons, by whom do your sons cast them out? For this reason they will be your judges. 28 “But if I cast out demons by the Spirit of God, then the kingdom of God has come upon you. 29 “Or how can anyone enter the strong man’s house and carry off his property, unless he first binds the strong man? And then he will plunder his house.

This passage could carry us to many different lessons. We could discuss casting out demons. We could talk about “a house divided”. We could even talk about the kingdom of God. In Chapter 10 we discussed this point in order to better understand the importance of discipleship. Maybe we will, but today let us understand the power Satan has over us and the importance of getting rid of his footholds in our lives.

As Jesus systematically gets rid of the accusations of the Pharisees, He also teaches us an important lesson. Jesus revealed that it doesn’t make logical sense for Satan to cast out his own demons because he would be stepping on his own feet. Let’s first understand that this concept works for God’s Kingdom as much as it does Satan’s kingdom. If we are attempting to operate in the Kingdom of God but are divided, then we are not operating within His Kingdom. To say it clearly: there is no division in the Kingdom of God. If we are not united in peace, then at least one side is not operating in Kingdom principles.

Moreover, we have to understand that God doesn’t work against Himself. Maybe we don’t understand His ways or His methods, but He is more sovereign than we usually give Him credit for. This is an important concept to grasp because many times we find ourselves disappointed, dismayed, or downright depressed about God’s involvement or perceived lack of involvement in situations around us. We think we know what God is up to or what He prefers but clearly at times we have no idea what the “man upstairs” is working on. Sometimes when things look grim or we cannot wrap our tiny brains around it, we need to give Him the benefit of the doubt. We must also realize the importance of not being divided as a church. Sure, we will have our differences of opinion, but we are all still united in the same Spirit, same body, and same congregation. It doesn’t matter what building you congregate in or what language you speak; we are all on the same team.

Verse 29 has always confused me until today. Jesus is explaining that the “strong man” is Satan (Beelzebul) and his influence in our lives. Before we can be ruled by the Kingdom of God and walk in the ways of Jesus, we must bind his influence in our lives and carry him away before experiencing true transformation by the Holy Spirit. Usually we don’t like talking about Satan or demons unless we are reading the book of Revelation where we get to see them all cast out of our lives for eternity. But the reality is that they are alive and active all around us today and we must constantly fight against them. What the enemy would like us to believe is that they are not real and therefore we pay no attention to the havoc they wreck.

How much have we fallen and weakened ourselves in these respects? How have we been divided? How have we doubted God? How have we allowed our spiritual enemy to reside in our lives and have influence over us? Yet if we begin to remove these hindrances from our lives, then the Kingdom of God has come upon you. Isn’t this what you want? What is stopping you?