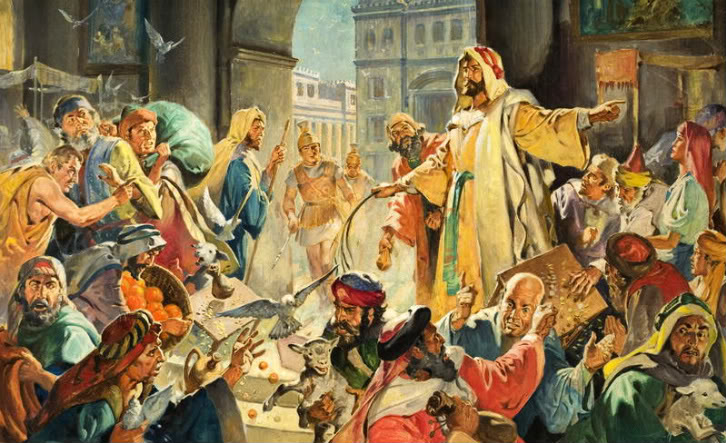 Mark 11:15-19
15 Then they came to Jerusalem. And He entered the temple and began to drive out those who were buying and selling in the temple, and overturned the tables of the money changers and the seats of those who were selling doves; 16 and He would not permit anyone to carry merchandise through the temple. 17 And He began to teach and say to them, “Is it not written, ‘MY HOUSE SHALL BE CALLED A HOUSE OF PRAYER FOR ALL THE NATIONS ‘? But you have made it a ROBBERS’ DEN.” 18 The chief priests and the scribes heard this, and began seeking how to destroy Him; for they were afraid of Him, for the whole crowd was astonished at His teaching. 19 When evening came, they would go out of the city.

We have heard this story many times of Jesus “losing His mind” at the temple where they were selling animals for sacrifice. Since Jewish law mandated that pure animals were needed for sacrifices, some people had started selling them in front of the temple. I’m sure at first it seemed like a legitimate idea. People needed animals and there were others able to provide them. We can all imagine that after centuries of slaughtering “pure” animals for sacrifice, they could be quite difficult to find unless they are bred. So, we can see the seemingly innocent idea behind opening up a couple booths to sell some purebred animals for sacrifice at the temple gates. This, however, started a trend and created an entire marketplace around the temple and completely distorted the view of the temple. Instead of seeing the house of God as a meeting place for God, people saw the temple through the lens of a market and making money. Has not the church done this very thing today?

Many non-churchgoers I have spoken with are actually quite disgusted about church money issues. People believe the church has become an umbrella company for tax-free employment and a way to not contribute to the tax system. When we look at some recent cases, we see instances where people don’t seem to properly manage the money that churches have collected from parishioners and seemingly waste it, even though they had good intentions (such as what Mark Driscoll did this year). Jesus was very clear that we must be careful not to veer off track from serving God and even though we have good intentions, not to turn our faith based organizations into robbers’ dens.

How can we tell the difference? What is ok and what is not? Where do we draw the line? The key is in verse 18. The chief priests and scribes, the societal religious elite, became afraid of Him because they knew He was right. They are the ones who began to incite the crowds against Jesus because they realize that their religiosity was being challenged by Him. He is exposing their self-centered religion for what it really is by revealing the hypocrisy that the people has allowed to slowly seep in and win over their hearts. The chief priests and scribes were profiting from it all! Even if they were not profiting financially, they were profiting in ways of pride and self-worship. They had created a system that honored man because of his piety instead of God for His goodness. So then, the key is analyzing how Jesus would react to the way we are doing things. We must examine our ways through His eyes, not the eyes of how the world does things. This is what gets us in trouble and stunts the spiritual growth of ourselves and others.

The crowd was astonished because he was challenging the religious culture and they knew He was right. The current trends of the time had gone unchallenged and accepted for so long that the people had just grown accustomed to dealing with it, not thinking anything could or would be changed. Jesus’ teachings revealed God’s truth about how He wanted to be glorified and honored and simultaneously exposed the hypocrisy of the religious leaders of the day. We can imagine, as happens today, that the people had accepted the hypocrisy of the way things were and just mumbled about it behind the scenes instead of doing something to confront and correct it. Jesus’ response was unexpected.

Jesus wasn’t upset about just the humanistic aspects of what the moneychangers were doing. His righteous anger didn’t burn against only the people who had turned God’s house of worship into a market. He was also upset about anyone who had turned God and His commands into a means of robbing people of their dignity and relationship with God the Father. People were being robbed of the truth because the Pharisees, scribes, and businessmen had become stumbling blocks to people trying to grow closer to God.

Are you being a similar stumbling block? Have we created a den of robbers that seeks out its own good instead of the good of people and the glory of God?