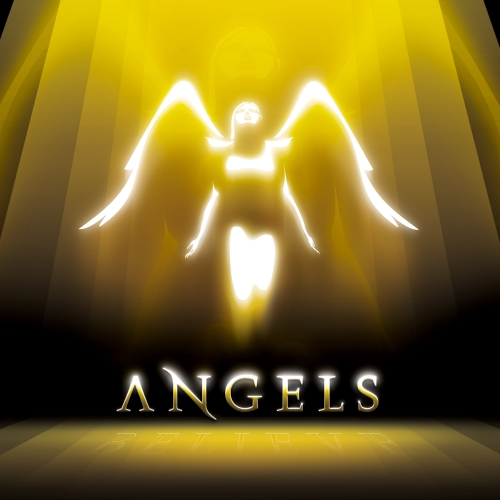 5 For to which of the angels did He ever say,

Today I have begotten You”?

“I will be a Father to Him

6 And when He again brings the firstborn into the world, He says,

“And let all the angels of God worship Him.”

7 And of the angels He says,

“Who makes His angels winds,

And His ministers a flame of fire.”

“Your throne, O God, is forever and ever,

And the righteous scepter is the scepter of His kingdom.

9 “You have loved righteousness and hated lawlessness;

Therefore God, Your God, has anointed You

With the oil of gladness above Your companions.”

“You, Lord, in the beginning laid the foundation of the earth,

And the heavens are the works of Your hands;

11 They will perish, but You remain;

And they all will become old like a garment,

12 And like a mantle You will roll them up;

But You are the same,

And Your years will not come to an end.”

13 But to which of the angels has He ever said,

“Sit at My right hand,

Until I make Your enemies

A footstool for Your feet”?

14 Are they not all ministering spirits, sent out to render service for the sake of those who will inherit salvation?

Angels are regarded as majestic beings.  Throughout the scriptures, angels (aka messengers) are used to bring news about situations on earth from heaven.  They are usually so brilliant in majesty that us earthlings fall to our faces and usually the first words of angels recorded in the bible are, “do not fear…”  It’s always made me wonder what it would be like to have an encounter with an angel.  Often we call good people angels; this is a reflection of our awe and wonder and goodness of angels (even though we forget the 1/3 of angels that fell from heaven with Satan.)  As a side note, we even look at angels as a type of promotion; we think that we become angels once we die if we are accepted into heaven, but this isn’t biblical at all.  That would be like saying a frog turns into a horse when it dies.  Angels and humans are two completely separate beings all together.  In fact, through studying the scriptures you will find that God regards us as being more important than angels.  What does this have to do with Jesus?

The excerpts in this passage are from different Psalms that sing about Jesus (which, by the way, were written and passed down well before Jesus was on the scene).  The comparison here is that the Jews believe in angels and the author is trying to explain that Jesus was not a mere angel here on earth for a time, but the literal Son of God.  Jesus was the fulfillment of the prophecies foretold in these psalms and other scriptures.  Verse 14 defines the purpose of angels.  While we can certainly say that Jesus ministered to many for the sake of salvation, He did much more than that.  I think part of what the devil has done to us is he has made us believe only half-truths.  “Angels exist but Jesus doesn’t.  I believe in the Holy Spirit but not the ability to raise someone from the dead.  I believe in God’s forgiveness but not for those who murder.”  The enemy’s tactic is to constantly twist scripture and get us believing something other than the whole truth.  The author of Hebrews is trying to dispel that here in regards to who Jesus is.  He isn’t just a spiritual being, He is the spiritual being we should all pay attention to.

I love verse 7, which details that Jesus isn’t an angel; He made the angels.  He gives them the ability to float in the air and shine brilliantly with the Glory of God.  I try to look at the spiritual realm as “all or nothing.”  By this I mean that if we are going to believe parts of the existence of the spiritual realm, then it only makes sense to believe all of it.  I know that some of you may think this is illogical, but the authors of these letters and books that describe the spiritual realm, have seen and understood it.  If we are going to believe in the existence of angels and demons, then why won’t we believe in the existence of miracles and spiritual rebirth?  If we acknowledge the existence of “outside forces” which we really don’t have an explanation for, then why won’t we at least listen to the explanations provided so we have some information with which to explore ourselves?  I’m not saying we should just take everyone’s word for everything and go on our merry ways; we must continuously explore and experiment with these things to understand them as best we can.  But at the same time we cannot simply negate the existence of something because we haven’t seen it with our own eyes.  This is entirely too close-minded to allow for any type of spiritual growth.  It would be like me negating the possibility of walking on the moon, even though others have done it and have lived to tell the story.

Where do you stand in regards to the spiritual realm?  Do you acknowledge its existence but ignore its presence in your life?  Why do you only believe parts of the bible you haven’t witnessed but others you reject?  Is there more you want to know about the spiritual realm?