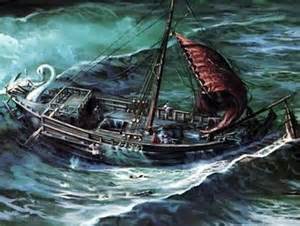 Jonah 1:4-10
4 The LORD hurled a great wind on the sea and there was a great storm on the sea so that the ship was about to break up. 5 Then the sailors became afraid and every man cried to his god, and they threw the cargo which was in the ship into the sea to lighten it for them. But Jonah had gone below into the hold of the ship, lain down and fallen sound asleep. 6 So the captain approached him and said, “How is it that you are sleeping? Get up, call on your god. Perhaps your god will be concerned about us so that we will not perish.” 7 Each man said to his mate, “Come, let us cast lots so we may learn on whose account this calamity has struck us.” So they cast lots and the lot fell on Jonah. 8 Then they said to him, “Tell us, now! On whose account has this calamity struck us? What is your occupation? And where do you come from? What is your country? From what people are you?” 9 He said to them, “I am a Hebrew, and I fear the LORD God of heaven who made the sea and the dry land.” 10 Then the men became extremely frightened and they said to him, “How could you do this?” For the men knew that he was fleeing from the presence of the LORD, because he had told them.

They say that a criminal who is caught sleeps best. Round up a bunch of people that you suspect to be guilty and the ones who sleep well that night in jail are the ones who are guilty of the crime. The reason is because when we do something we know we shouldn’t, it wears on us. Getting caught relieves us of this stress and inner turmoil. In this case, Jonah disobeyed God and was trying to run from Him. How else would he be able to sleep like a baby while the boat is getting tossed around and the crew is running around panicking? Jonah knew he had been caught. He realized in this moment that there was no place to run and hide from God. Jonah was experiencing what we read in Psalm 139:

7 Where can I go from Your Spirit? Or where can I flee from Your presence? 8 If I ascend to heaven, You are there; If I make my bed in Sheol, behold, You are there. 9 If I take the wings of the dawn, If I dwell in the remotest part of the sea, 10 Even there Your hand will lead me, And Your right hand will lay hold of me.

Even though every man had their own god they called out to, fear overwhelmed them when Jonah told them who his God was. They knew the name of the Lord and that He should be feared. Even they knew that Jonah should not be trying to run and hide from the One True God. We also see here that when we try to ignore God and flee His presence, that it affects everyone around us. It wasn’t just Jonah that was caught in this storm, but everyone else with whom he was travelling. As if ignoring God’s call isn’t selfish enough, we understand that our refusal to be obedient brings others under our curse as well. The majority of us think that by refusing to obey God it is just something between us and Him, but our disobedience makes us bearers of calamity.

God wants to bless us and use us to bless others. Yet when we disobey Him, we bring ourselves under the curse of disobedience and affect others as well. If you are being disobedient to God, just look around at your family, your friends, your coworkers…they will be infected by your decision to disobey God. This isn’t to “scare” you into obeying God; in fact, Jonah wasn’t scared at all in this instance. He knew exactly what was happening and why it was happening. He was more scared of going to Ninevah than he was of God killing him; maybe he preferred for God to kill him than make him go. This is an example of how our disobedience results in calamity in our lives and the lives of others. Jonah could have continued ignoring the storm and refusing to acknowledge what was happening as many of us do today.

People ask us how we can remain calm and composed during times of chaos around us. It is because we know why the chaos is there. We look around and recognize that what is happening is a direct result of our disobedience to God. How long will we let those around us suffer before we confess our disobedience?