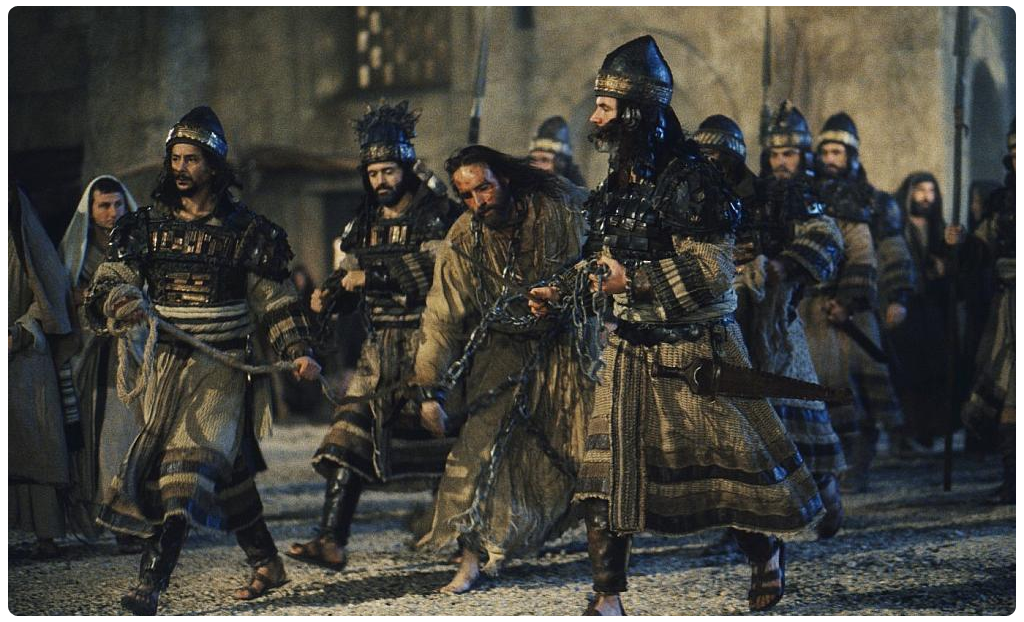 Matthew 26:57-68
57 Those who had seized Jesus led Him away to Caiaphas, the high priest, where the scribes and the elders were gathered together. 58 But Peter was following Him at a distance as far as the courtyard of the high priest, and entered in, and sat down with the officers to see the outcome. 59 Now the chief priests and the whole Council kept trying to obtain false testimony against Jesus, so that they might put Him to death. 60 They did not find any, even though many false witnesses came forward. But later on two came forward, 61 and said, “This man stated, ‘I am able to destroy the temple of God and to rebuild it in three days.’ ” 62 The high priest stood up and said to Him, “Do You not answer? What is it that these men are testifying against You?” 63 But Jesus kept silent. And the high priest said to Him, “I adjure You by the living God, that You tell us whether You are the Christ, the Son of God.” 64 Jesus said to him, “You have said it yourself; nevertheless I tell you, hereafter you will see THE SON OF MAN SITTING AT THE RIGHT HAND OF POWER, and COMING ON THE CLOUDS OF HEAVEN.” 65 Then the high priest tore his robes and said, “He has blasphemed! What further need do we have of witnesses? Behold, you have now heard the blasphemy; 66 what do you think?” They answered, “He deserves death!” 67 Then they spat in His face and beat Him with their fists; and others slapped Him, 68 and said, “Prophesy to us, You Christ; who is the one who hit You?”

Generally, we read this portion of scripture and shake our heads in disdain.  “How could they not know He is the Christ?”  But they don’t have the full story yet.  We have seen all through Jesus’ testimony that the majority of the religious leaders of His time were unconvinced of His deity.  It is easy for us to disagree because for those of you reading this blog, you have probably already come to recognize Jesus as the Christ.  But imagine these guys; after over 400 years of tradition and practice someone is telling them they have it all wrong.  And these weren’t regular Jews, these were masters of the religion.  Imagine if you have worked at your job for 30-40 years and have dedicated your entire life to it and some whippersnapper comes along and tells you you have been screwing it up from the beginning.  You might want to crucify them too!

We have to be careful of our perspective in this story because it causes us to miss the bigger picture.  Yes, we can learn historically what happened to Jesus in His final days before they killed Him, but more importantly we must be careful that we don’t take a similar stance as did the Pharisees, Sadducees, and Scribes.  Even if it doesn’t pertain to religious beliefs, we must be wary of our pride that is fueled by habit and tradition.  We can see in the scriptures that tradition was not only very important to the Jewish nation, but also humanity in general.  Why do you do what you do?  The Jews say, “because this is how our forefathers did it.”  We can understand that, especially if we grew up practicing those traditions.  But if it is only because of that, if we only do it because we always have, that isn’t a good enough response.

When we look at Jewish tradition and we read the original commandments and traditions and observances handed down from God, He explains why those things are important.  Actually, all of the reason revolve around Him.  It was so His people would not forget who He is.  Instead, it became a book full of empty traditions that were performed out of ritual and habit, not with the purpose of honor and remembrance.  This is why I always tend to avoid ritualistic behaviors because I don’t want to blindly perform acts just because I’ve always done them or someone else has always done them and says I should without good reason.  My acts and rituals are meaningless if they don’t bring me closer to God.

All that to say: instead of reading this passage of scripture with critical judgment against the religious leaders, let us consider how often we remain blind to God’s truth because we are too stuck in what we have always done to see what God is doing.  I don’t know about you, but that’s not something I want to ever miss!