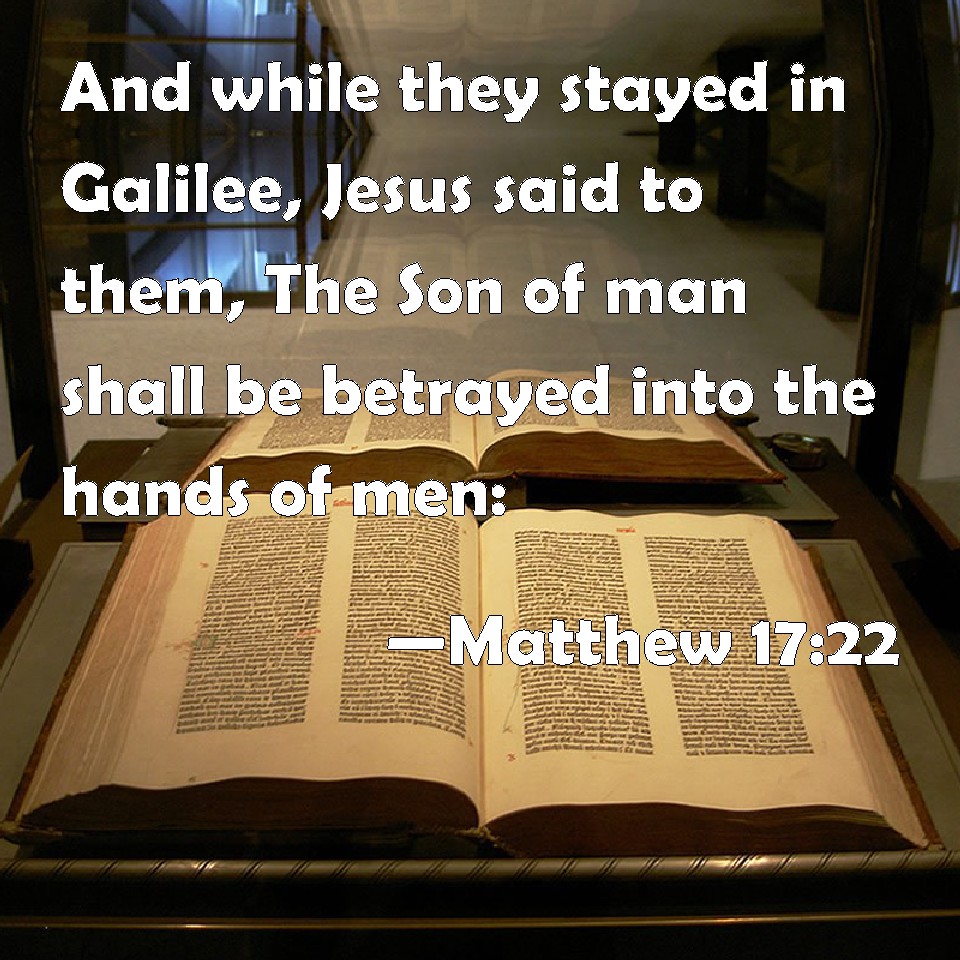 Matthew 7:22-23
22 And while they were gathering together in Galilee, Jesus said to them, “The Son of Man is going to be delivered into the hands of men; 23 and they will kill Him, and He will be raised on the third day.” And they were deeply grieved.

This is a little snippet of scripture that we generally gloss over because we already know what will happen.  But imagine the devastation of His closest followers, the original 12 disciples, when He said this.  He is quoted as saying it a number of times during His 3 years of training them.  They had grown very close to Him.  He was their teacher, their master, their Lord, and soon to be their Savior.  They understood these things but you can tell they were still too caught up in the present physical realm.  They completely missed that He said He would be raised again on the third day!

In Jewish custom, it was extremely criminal for any Jew or group of Jews to hand over a fellow Jew to the Gentiles.  This is exactly what Jesus was referring to when He said that He would “be delivered into the hands of men.”  It is an unthinkable act in the Jewish mind.  God’s ordinances for Israel and how they should treat their fellow Jew was quite clear that you never betray each other, yet Jesus’ offense of the current worldly culture drove the religious elite to such a despicable act.  In the back of their minds they had to know that what they were doing was sinful, but they gave in to their lusts of power.

Regardless of what side of this story you might resonate with, we see that it is easy to succumb to the pull of societal pressures, inward conflict, and emotions that hide the truth of the situation.  Too easily we are deceived by the enemy.  This is why the Apostle Paul wrote in Ephesians 6 about the armor of God that helps us avoid being swept away by our emotions and fleshly desires:

11 Put on the full armor of God, so that you will be able to stand firm against the schemes of the devil. 12 For our struggle is not against flesh and blood, but against the rulers, against the powers, against the world forces of this darkness, against the spiritual forces of wickedness in the heavenly places. 13 Therefore, take up the full armor of God, so that you will be able to resist in the evil day, and having done everything, to stand firm. 14 Stand firm therefore, HAVING GIRDED YOUR LOINS WITH TRUTH, and HAVING PUT ON THE BREASTPLATE OF RIGHTEOUSNESS, 15 and having shod YOUR FEET WITH THE PREPARATION OF THE GOSPEL OF PEACE; 16 in addition to all, taking up the shield of faith with which you will be able to extinguish all the flaming arrows of the evil one. 17 And take THE HELMET OF SALVATION, and the sword of the Spirit, which is the word of God. 18 With all prayer and petition pray at all times in the Spirit, and with this in view, be on the alert with all perseverance and petition for all the saints,

The enemy gets in our heads because we don’t stay centered on God’s truth, nor protect our hearts with righteousness, nor walk in peace nor defend ourselves by trusting in God, nor protect our minds with the power of salvation, nor fight back with God’s Word.  This is our daily battle and we must take it seriously!  Otherwise we can be depressed and saddened like the disciples and not see the bigger picture or be completely swept away by our human desires like the Pharisees.  We think it was a big deal that Jesus was betrayed by His own countrymen but we betray Him even more by not trusting Him when we should!