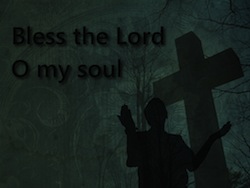 3 Blessed be the God and Father of our Lord Jesus Christ, who according to His great mercy has caused us to be born again to a living hope through the resurrection of Jesus Christ from the dead, 4 to obtain an inheritance which is imperishable and undefiled and will not fade away, reserved in heaven for you, 5 who are protected by the power of God through faith for a salvation ready to be revealed in the last time. 6 In this you greatly rejoice, even though now for a little while, if necessary, you have been distressed by various trials, 7 so that the proof of your faith, being more precious than gold which is perishable, even though tested by fire, may be found to result in praise and glory and honor at the revelation of Jesus Christ; 8 and though you have not seen Him, you love Him, and though you do not see Him now, but believe in Him, you greatly rejoice with joy inexpressible and full of glory, 9 obtaining as the outcome of your faith the salvation of your souls.

I know I usually take a smaller portion of scripture at a time, but this was too beautiful to break up.  I didn’t want to divide the thought because it is all encompassing.  Read it again and focus on what Peter is saying here about God, our relationship with Him, and where we are right now in life.

I’ve always had a problem with any phrase that refers to humans “blessing God”.  I looked up the original wording today and discovered that it refers to actually praising God.  It is different than the word we find used in Jesus’ sermon on the mount when He lists the “beatitudes” which refers to happiness or joy.  Certainly, praise and worship of our Almighty God should be out of happiness, but let’s recognize that when we “bless the Lord,” we are praising Him.  It is also easy to connect the dots and think that by us praising Him, we are making Him happy, but why should we bless the Lord anyway?

I was just explaining to someone last night how awesome and loving our God is.  Many references are made throughout the bible to the Kingdom of God.  It is an explanation of how God works and how He reigns.  He owns it all; His magnificence and His glory are immeasurable.  We get glimpses of this if we dig into history and see the expanse of the Roman Empire, Greece, and even periods of time in Israel’s history.  The expanse of these realms on earth were difficult to comprehend in their time. The amount of gold, marble, silver, cattle, land, and many other things were innumerable.  God owns more than that, but it doesn’t stop there!  Not only does He own all this and more; He gives it to us!  His kingdom isn’t one full of peasants and poor people with a select few who were born into kinship with the King that get to relish in all the possessions of the royal family.  When we choose to live in His Kingdom, He adopts us as sons and daughters.  We move right into immediate audience with the King.  Therefore, what have we to worry about here on earth?  Why do we concern ourselves with what we don’t have?  Rather, Peter here echoes a similar topic that is found in James.

Life isn’t easy, is it?  I mean, just when things seem to be “going right,” something else comes up, or an element of the past comes back to haunt you, or the thought that something just isn’t enough creeps into your mind.  Something always seems to be against us whether it is physical, emotional, or spiritual.  We are constantly being challenged on some front; we get to rejoice in this!  We get an opportunity to display for others that our hope is not in the things of this world (for if it were, we would constantly be disappointed).  Rather, our trust in God, (which Peter describes as more valuable than gold), becomes stronger and better refined through difficulty.  But, as Peter explains in verse 8, our faith is only refined if we use it.  We cannot merely say we have faith but not put it to use.  It is in these times of trial (and even direct persecution) that we have an opportunity to rely on God’s promises that “everything will be alright” and that He loves us.  If we don’t take that moment to jump into His arms, if we don’t exercise the supposed faith that we have, then it is just a waste of time and energy.  If we don’t actually trust in Him, then what is the evidence of our salvation (which is the result of our faith that He saved us in the first place)?  We can see more of an explanation of this in Paul’s letter to the Ephesians.