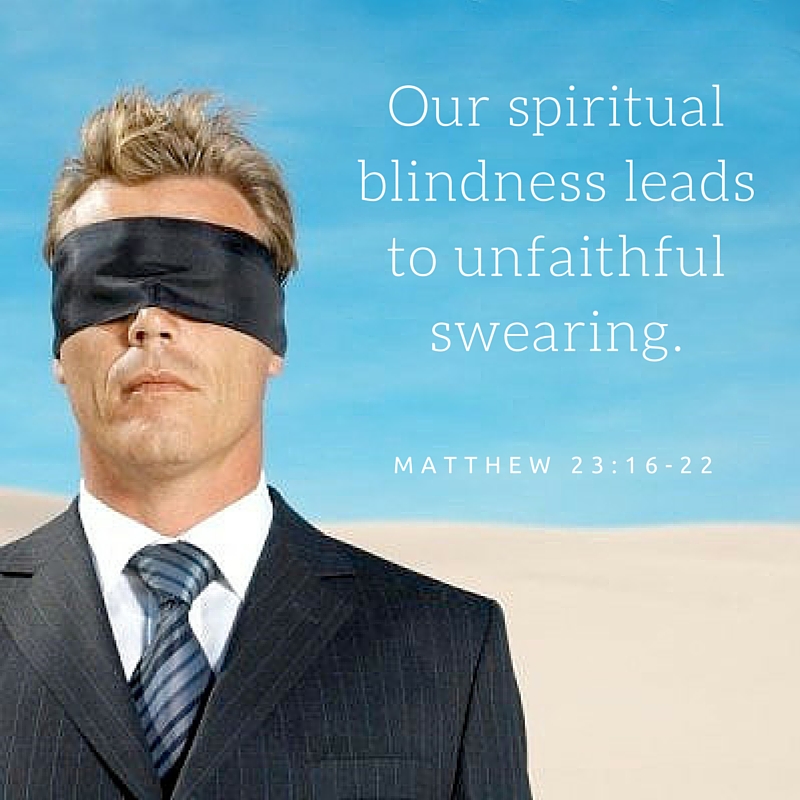 Jesus reveals the silliness of those who use temple elements to swear by; ironically Jesus exposes that if anything, they should be swearing by the temple and not the things that were used to construct it.  First, let’s look back to what Jesus said in Matthew 5 in the Sermon on the Mount:

33 “Again, you have heard that the ancients were told, ‘YOU SHALL NOT MAKE FALSE VOWS, BUT SHALL FULFILL YOUR VOWS TO THE LORD.’ 34 “But I say to you, make no oath at all, either by heaven, for it is the throne of God, 35 or by the earth, for it is the footstool of His feet, or by Jerusalem, for it is THE CITY OF THE GREAT KING. 36 “Nor shall you make an oath by your head, for you cannot make one hair white or black. 37 “But let your statement be, ‘Yes, yes ‘ or ‘No, no ‘; anything beyond these is of evil.

Jesus proclaimed that in the Kingdom of Heaven, our truthful word and fulfillment of it is all that is necessary.  People had made a habit, however, of finding different ways to “back up” their statements that were unbelievable.  Even today we “swear to God” or “swear on our mother’s grave” but to what end?  Are our words really that different than our actions?  Do we not live a trustworthy life for people to take us at our word?

Now let us look at the hypocrisy that Jesus points out in this situation.  It’s a tiny glimpse of a bigger picture that has been a global problem since The Fall.  They were putting more importance on the gold used to create the temple than the temple itself.  They were honoring the sacrifice instead of the One who it was being sacrificed to.  They were idolizing the creation instead of worshipping the Creator!  This is why Jesus called them blind men because they were missing the bigger picture.  They were blind to the Glory of God.  If they saw God’s glory, there would be no mistake as to what or who to worship!  Instead, they were worshipping their own desires to inflate their self-righteousness instead of recognizing the righteousness of God.

When we need to swear to something to make our own lives seem more legit, we are idolizing that which we swear by and revealing that we ourselves are not trustworthy.  Even when we “swear to God,” we fool ourselves.  We shouldn’t have to swear to God because people should know that we are His children and that our words are trustworthy.  That from our lips flow nothing but truth, hope, and love.  Even if what we are saying seems contrary to things in this world (ie we are speaking about the Kingdom of God), people should be able to believe what we say simply because we only live in the truth.  As Jesus said in chapter 5:

“Anything beyond these is of evil.”