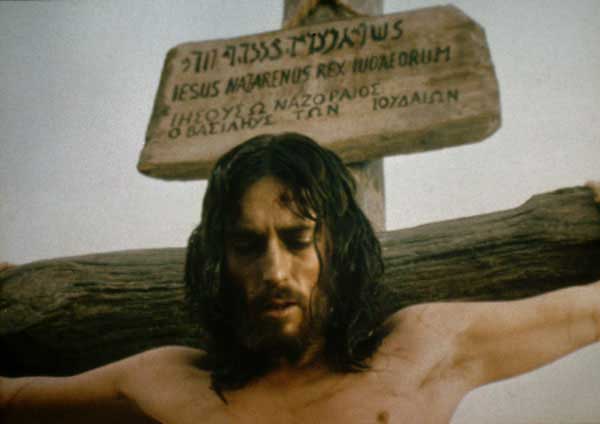 Matthew 27:33-37
33 And when they came to a place called Golgotha, which means Place of a Skull, 34 they gave Him wine to drink mixed with gall; and after tasting it, He was unwilling to drink. 35 And when they had crucified Him, they divided up His garments among themselves by casting lots. 36 And sitting down, they began to keep watch over Him there. 37 And above His head they put up the charge against Him which read, “THIS IS JESUS THE KING OF THE JEWS.”

This short passage sets the scene for the reader.  We have the location, we have the acts, and we have the forefront, which is the guards hanging Him on the cross and then taking bets for His clothing.  For the majority of the folks there at the time, it was business as usual.  The wine mixed with gall was offered as a pain killer for the one being crucified.  They kept watch over Him until He died to make sure nobody tried to rescue Him, especially with the ruckus caused leading up to His crucifixion.  The guards responsible for the crucifixion had dibs on the clothing.  The top of the cross was designed to post a sign that read the crime of the one being punished.  This was normal.  This is how things were done.  There was no cause for alarm except for His loved ones who stood in terror as they watched their beloved die.

In John 19, we have a more descript retelling of Jesus’ time on the cross as he was there talking to Jesus as He hung:

16 So he then handed Him over to them to be crucified. 17 They took Jesus, therefore, and He went out, bearing His own cross, to the place called the Place of a Skull, which is called in Hebrew, Golgotha. 18 There they crucified Him, and with Him two other men, one on either side, and Jesus in between. 19 Pilate also wrote an inscription and put it on the cross. It was written, “JESUS THE NAZARENE, THE KING OF THE JEWS.” 20 Therefore many of the Jews read this inscription, for the place where Jesus was crucified was near the city; and it was written in Hebrew, Latin and in Greek. 21 So the chief priests of the Jews were saying to Pilate, “Do not write, ‘The King of the Jews ‘; but that He said, ‘I am King of the Jews.’ ” 22 Pilate answered, “What I have written I have written.” 23 Then the soldiers, when they had crucified Jesus, took His outer garments and made four parts, a part to every soldier and also the tunic; now the tunic was seamless, woven in one piece. 24 So they said to one another, “Let us not tear it, but cast lots for it, to decide whose it shall be”; this was to fulfill the Scripture: “THEY DIVIDED MY OUTER GARMENTS AMONG THEM, AND FOR MY CLOTHING THEY CAST LOTS.” 25 Therefore the soldiers did these things. But standing by the cross of Jesus were His mother, and His mother’s sister, Mary the wife of Clopas, and Mary Magdalene. 26 When Jesus then saw His mother, and the disciple whom He loved standing nearby, He said to His mother, “Woman, behold, your son!” 27 Then He said to the disciple, “Behold, your mother!” From that hour the disciple took her into his own household. 28 After this, Jesus, knowing that all things had already been accomplished, to fulfill the Scripture, said, “I am thirsty.” 29 A jar full of sour wine was standing there; so they put a sponge full of the sour wine upon a branch of hyssop and brought it up to His mouth. 30 Therefore when Jesus had received the sour wine, He said, “It is finished!” And He bowed His head and gave up His spirit.

Next time, as we continue in Matthew, we will see more in detail the conversation between Jesus and the criminals hung beside Him.  But here, we can see how the details of His crucifixion fulfill various prophecies spoken by Himself and others over time.  It is interesting to see how Pilate “made a mistake” in writing the charge of Jesus.  Also we see the prophecy about the guards and His clothing.  We also see that Jesus fulfills His own prophecy in saying that He would not drink wine again until He was resurrected.  Jesus took care of His final details of life as He charged His disciple John to care for His family.  Even though Jesus was coming back, He knew that He would not be around a while lot to care for them the way He had been.

To the world this was a normal sequence of events.  This was “business as usual”.  As Holy week approaches and the world prepares to celebrate Easter with candy bunnies, peanut butter eggs (yum!), and maybe some time off of work, will we too treat it as business as usual?  Will we just let each day pass as “normal” or will we recognize the significance of Jesus’ crucifixion?  Will we memorialize it with a cross around our neck or on oru wall or a bumper sticker on our car or will we live in His honor?  For the Christian this isn’t just an event in history, but the event that changed everything!  In 1 Corinthians 11 the Apostle Paul wrote  avery important application of why we observe the act of communion:

26 For as often as you eat this bread and drink the cup, you proclaim the Lord’s death until He comes.

Jesus wasn’t just the King of the Jews; He is the King of all of us.  He is our Lord.  He is our Savior.  He is our ever loving Heavenly Father.  On this day when He died it might have seemed like business as usual but it changed everything.  Does your life reflect it?