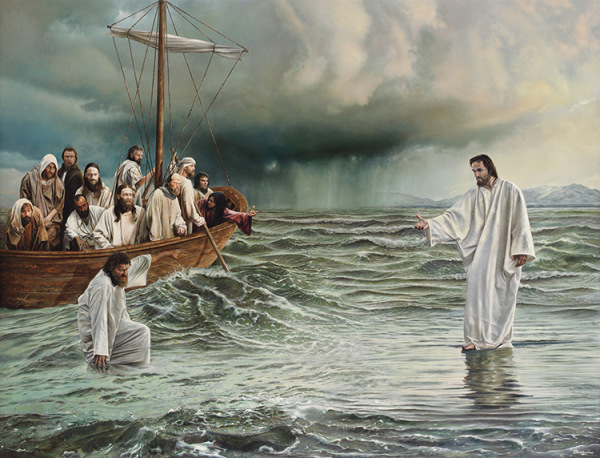 This story of Peter walking on water with Jesus is very representative of our relationship with God. We arrive to a point in our lives where we are confronted with a decision. We have a choice to trust God or not. We may be questioning His very existence. We may be questioning the authenticity of the bible. We may be wondering if it is His voice we are hearing in the stillness of our heart. Whatever the case may be, we have arrived at an impasse where a decision must be made. In this passage we see Peter coming up with the idea to test if it really is Jesus on the water. He has begun to think beyond this world and in the Kingdom of God. In no other circumstance would Peter say, “Hey, if it really is you, then tell me to get out of this boat and walk on the water” unless he knew the potential of it actually happening with Jesus. To this point, we don’t see any other recordings of anyone walking on water.

The fact that Jesus was walking on the water and Peter knew that if Jesus could do it, He could help Peter do it, is a very brave step in faith. We can see here the trust that Peter had in Him to this point. We would be wise to take note of this principle. Jesus wasn’t just a sacrifice for us, but an example. He showed us what is possible in our lives and that His Spirit can empower us to do the very same things He did. Peter also knew that if it was just a ghost, then there isn’t a way the ghost would have been able to help him walk on water. Furthermore, if it was Jesus’ ghost, Jesus would have said, “no, stay in the boat. I’ll come to you.” Jesus was testing their faith; Peter was testing Jesus’ authenticity. Was this guy for real?

After Peter presented the test, Jesus called him on it. “Come on out!” Jesus said. It had become the moment of truth. Would Peter follow through on his challenge? Would he really test Jesus by trusting His words? One of the interesting things about our growth in faith and our testing of God’s authenticity is that it always requires action on our part. As we read through the scriptures we find opportunities like this all the time. Man believes in God but isn’t quite sure how much. Then God presents them an opportunity to believe in Him more. Man then has a choice to take a step of faith. It’s never about man just sitting back and watching the show; we always have to play a part in the miracle God wants to show us. God proves Himself faithful and true and then man trusts Him even more than before. James 2 talks about how just believing is pointless if we do not act on our faith:

14 What use is it, my brethren, if someone says he has faith but he has no works? Can that faith save him? 15 If a brother or sister is without clothing and in need of daily food, 16 and one of you says to them, “Go in peace, be warmed and be filled,” and yet you do not give them what is necessary for their body, what use is that? 17 Even so faith, if it has no works, is dead, being by itself. 18 But someone may well say, “You have faith and I have works; show me your faith without the works, and I will show you my faith by my works.” 19 You believe that God is one. You do well; the demons also believe, and shudder. 20 But are you willing to recognize, you foolish fellow, that faith without works is useless? 21 Was not Abraham our father justified by works when he offered up Isaac his son on the altar? 22 You see that faith was working with his works, and as a result of the works, faith was perfected; 23 and the Scripture was fulfilled which says, “AND ABRAHAM BELIEVED GOD, AND IT WAS RECKONED TO HIM AS RIGHTEOUSNESS,” and he was called the friend of God. 24 You see that a man is justified by works and not by faith alone. 25 In the same way, was not Rahab the harlot also justified by works when she received the messengers and sent them out by another way? 26 For just as the body without the spirit is dead, so also faith without works is dead.

Our faith in God is perfected by acting upon it. Peter’s faith in Jesus was shown not only in the challenge, but in the follow-through. Peter proved his faith and put it into action the moment he stepped onto the water. If Peter only challenged Jesus in verse 28 and then ignored Jesus’ response, then Peter’s faith would have been revealed as dead. There will be many opportunities in our lives to call out to Jesus on our own terms that will put us in a vulnerable position. We must be willing to follow through with how we challenge Jesus. He doesn’t mind us putting ourselves in this vulnerable position because He knows that we will grow in our relationship with Him. Are you willing to call out to Jesus in faith and follow through with what He tells you to do?