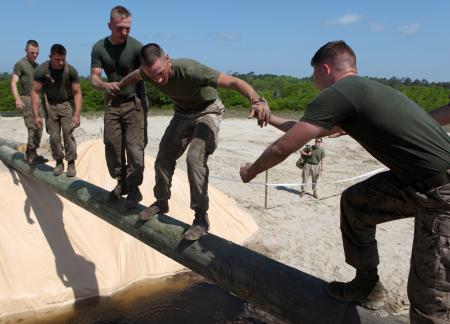 As part of Paul’s “sign off,” he encourages the Corinthians about other men of the faith.

10 Now if Timothy comes, see that he is with you without cause to be afraid, for he is doing the Lord’s work, as I also am. 11 So let no one despise him. But send him on his way in peace, so that he may come to me; for I expect him with the brethren. 12 But concerning Apollos our brother, I encouraged him greatly to come to you with the brethren; and it was not at all his desire to come now, but he will come when he has opportunity.

The best part of being in the military is the camaraderie.  There is none like it, especially when you have been through difficult events together like war or even just basic training.  There is something to be said about enduring hardship with fellow human beings that creates a bond like no other.  In Guatemala, I am discovering that it is all about “who you know.”  If you ask someone a favor and they cannot do it, they refer you to someone in their family or another friend and they send you to them, telling them, “this is so-and-so, they can be trusted, help them out as you would me.”  Why aren’t Christians more like this?

It seems to me Timothy had some problems in Corinth before.  You see, as Paul continued to build up churches in the region, there was much opposition.  Some said Paul was a fake, others taught twisted versions of the doctrine he was, and there were even some that tried to completely sweep the church away from its beliefs. Paul is letting the Church at Corinth know that Timothy is genuine and can be trusted as a brother.  Paul uses the word “brethren” and indicates, “he is one of us.”  Do we treat other Christians as “one of us?”

It amazes me how much proclaimed Christians these days don’t act as if we are a family.  Our American culture has driven us to trust nobody, only rely on ourselves, and push through alone.  Do we see that anywhere in the bible as something God has told us to do?  He tells us to stick together, help each other, and strengthen one another because in this world there will be many troubles as we continue following God’s will in His kingdom. So we need to stop behaving through the world’s view and start acting as if we are united in one spirit.

How do you treat other brethren of the faith?  Do you welcome them into your home, give them whatever they need, and send them off without cause to worry?  I’ve been “taken in” and “take care of” by so many Guatemalan Christians in the last 8 months it makes me wonder how many American Christians there really are.  Maybe the enemy has convinced so many of us that we are not in a battle and that nobody can be trusted that now we are like little islands of faith withering away because we think we are all alone in this world.

If we proclaim to be Christians and don’t treat other Christians as family, then we should be ashamed of our hypocritical selves.