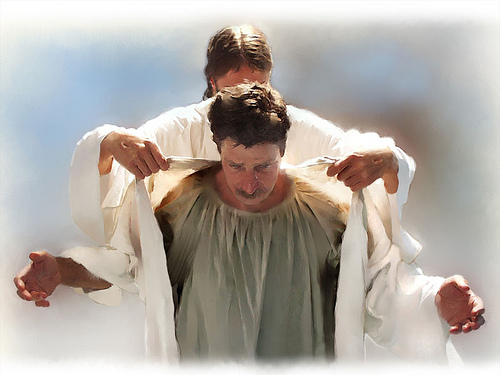 Matthew 22:11-14
11 “But when the king came in to look over the dinner guests, he saw a man there who was not dressed in wedding clothes, 12 and he said to him, ‘Friend, how did you come in here without wedding clothes?’ And the man was speechless. 13 “Then the king said to the servants, ‘Bind him hand and foot, and throw him into the outer darkness; in that place there will be weeping and gnashing of teeth.’ 14 “For many are called, but few are chosen.”

Theologically speaking, these few verses are very rich but also very controversial.  If we continue to follow Jesus’ parable and remember that the king represents the Kingdom of God, we just might be enlightened (and subsequently challenged) as we understand what Jesus is explaining.

If you have been reading my posts for some time, you know that I have struggled with the idea of predestination.  That is, are we all called to Christ and those who respond in kind are predestined to enjoy heaven or are only some chosen and those are the already pre-ordained humans that get to spend eternity with the Father?  Before we get tied up in this theological black hole, let us first examine the first two verses.

As the king (i.e. the Kingdom) challenges the man who is not properly dressed for the ceremony, we are probably asking the same question the king did, but in a different tone: “yeah, how did the man get in and while we are asking, what does it matter?”  First of all, let us consider the wedding clothes.  We must be careful that we don’t relate this to “goodness” or our outward show of righteousness.  It isn’t about good deeds, which we know doesn’t mean much to God at all.  To stand in the presence of God (live in the Kingdom) we must be clothed in righteousness.  Consider what is said in Isaiah 61:

10 I will rejoice greatly in the LORD, My soul will exult in my God; For He has clothed me with garments of salvation, He has wrapped me with a robe of righteousness, As a bridegroom decks himself with a garland, And as a bride adorns herself with her jewels.

This godly righteousness allows us to stand and live in God’s presence without being evaporated!  In the physical sense when we find ourselves in God’s presence it is our holiness that allows us to survive, which is only attainable as a result of God’s grace because we are not holy enough on our own.  However, when we are clothed in His righteousness we also get to experience His presence here on earth.  It is a blessing to be able to walk in the presence of God today on earth as it is in heaven.

So now that we know what the wedding clothes are, how do we get them?  The Apostle Paul explains it in Ephesians 2:

4 But God, being rich in mercy, because of His great love with which He loved us, 5 even when we were dead in our transgressions, made us alive together with Christ (by grace you have been saved), 6 and raised us up with Him, and seated us with Him in the heavenly places in Christ Jesus, 7 so that in the ages to come He might show the surpassing riches of His grace in kindness toward us in Christ Jesus. 8 For by grace you have been saved through faith; and that not of yourselves, it is the gift of God; 9 not as a result of works, so that no one may boast. 10 For we are His workmanship, created in Christ Jesus for good works, which God prepared beforehand so that we would walk in them.

The part that relates this to the wedding analogy is that there are two parts: the invitation and the RSVP.  Remember the first group of invitees that rejected Christ’s invitation to the party and even killed off some of His servants?  They were extended the invitation (grace) but refused to respond towards the positive (faith).  In this second group we see the invitation extended and many respond and come.  Yet we know that when going to a wedding, we cannot just show up in sweatpants and a t-shirt.  If we do, we will most likely be kicked out.  If we were to imagine the setting of a king in a palace, the invitees come and hand the door guard their invitation as proof that they were invited there and mingle in the salon until the king arrives to greet his guests.  He notices however that even though this one man gained entrance into the palace with his invitation, he did not RSVP correctly.  That is, he did not respond to God’s invitation of grace by faith and therefore is unfit to be a guest in the party.  It is through this faith that we become clothed in righteousness (as explained by Paul and Isaiah).

Anyone who was involved in church during the 80s and 90s has come to memorize John 3:16:

For God so loved the world, that He gave His only begotten Son, that whoever believes in Him shall not perish, but have eternal life.

Furthermore, we read in 2 Peter 3:

7 But by His word the present heavens and earth are being reserved for fire, kept for the day of judgment and destruction of ungodly men. 8 But do not let this one fact escape your notice, beloved, that with the Lord one day is like a thousand years, and a thousand years like one day. 9 The Lord is not slow about His promise, as some count slowness, but is patient toward you, not wishing for any to perish but for all to come to repentance.

These two verses coupled with Matthew 22:14 seems to better clarify the issue.  Maybe my perspective is flawed, but it seems that God knows the destruction and judgment of man that is looming, but prefers that all send their RSVP to His grace through faith.  When He returns to earth in all His glory, those of us that are not clothed in His righteousness (as a result of our response in faith) will be eliminated because we cannot stand safely in His presence without being clothed in righteousness.  Those who do not agree with me on this cling to a passage in Romans 8 that could be interpreted in the opposite direction:

I have heard this passage used to defend the stance that God foreknows and predestines those who will come to Him.  However, I believe that this passage, linked with all the previous verses, explains that He knows who will come to Him and who will not.  Therefore, His “slowness” as Peter mentions is a delay so that all who will respond in faith have the opportunity to do so because He does not wish for any to perish that do not have to and those that do come to Him are predestined to receive the heavenly reward of residence in His Kingdom.  The chosen are those whom have come to God by grace through faith.  I ask anyone whose perspective is contrary to this to please explain it because for now, this is the only way I can see these pieces of Scripture coexisting.