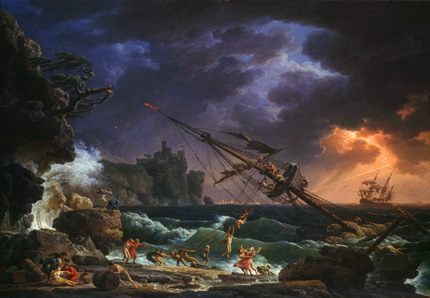 Acts 27:33-44
33 Until the day was about to dawn, Paul was encouraging them all to take some food, saying, “Today is the fourteenth day that you have been constantly watching and going without eating, having taken nothing. 34 “Therefore I encourage you to take some food, for this is for your preservation, for not a hair from the head of any of you will perish.” 35 Having said this, he took bread and gave thanks to God in the presence of all, and he broke it and began to eat. 36 All of them were encouraged and they themselves also took food. 37 All of us in the ship were two hundred and seventy-six persons. 38 When they had eaten enough, they began to lighten the ship by throwing out the wheat into the sea. 39 When day came, they could not recognize the land; but they did observe a bay with a beach, and they resolved to drive the ship onto it if they could. 40 And casting off the anchors, they left them in the sea while at the same time they were loosening the ropes of the rudders; and hoisting the foresail to the wind, they were heading for the beach. 41 But striking a reef where two seas met, they ran the vessel aground; and the prow stuck fast and remained immovable, but the stern began to be broken up by the force of the waves. 42 The soldiers’ plan was to kill the prisoners, so that none of them would swim away and escape; 43 but the centurion, wanting to bring Paul safely through, kept them from their intention, and commanded that those who could swim should jump overboard first and get to land, 44 and the rest should follow, some on planks, and others on various things from the ship. And so it happened that they all were brought safely to land.

We could probably speculate for sometime why the crew was not eating for two weeks.  The options could range anywhere from fear to superstition to practicality.  The key principle to see here is that not only was Paul now being listened to by the men (even though he was a prisoner), but they were following his lead.  I’m reminded of a cadence we used to sing in the Marine Corps that started, “people say we’re crazy for the crazy things we do…” As Christians, our attitudes and actions  (if they are of a Kingdom mindset) should seem crazy to the rest of the world.  Between the storms, the inability to control the ship, the foreboding message of death from Paul, and even the delusions they had to be having after not eating for two whole weeks, Paul encourages them to cheer up and eat!  Not only does he boldly step out and talk to the crew but he also gives thanks to God for what they have amidst the rough adventure they have been enduring.  Despite the chaos around them, Paul remained calm and joyful!  Isn’t this craziness?

The plan was to run the ship aground and do so in a controlled manner.  The strategy of lightening the load and loosening everything was to get them as close to shore as possible so their journey outside the boat until they reached the land was easiest.  Julius for some reason felt the need to keep Paul alive until they reached Rome.  Was it because he felt safe with Paul?  Was it a subtle indication the Holy Spirit was putting upon him to keep the prisoners alive?  Whatever the reason, we see God’s promise to Paul continually being fulfilled and Paul continued to trust Him for it.

Our lesson for today in this is how we behave in adversity.  If we are born again, we are no longer of this world; we are residents of the Kingdom of God and we are to act as such.  This isn’t to say we must learn the lingo and follow a set of rules of behavior.  It is to indicate that if we are constantly working on our relationship with God through Christ, it will be evident in our attitude and actions.  Sometimes we might find ourselves having dinner with a group on unbelievers and suddenly feel awkward to pray and give thanks to God for the food just like we do any other time.  Maybe we are sensing a gentle nudge from God to say or do something, but we retract for fear of the consequences.  In doing this, we not only see our lack of faith and providence, but reveal to others that our faith isn’t real.  I’ve fallen into this trap myself and have caught myself giving the impression that my relationship with God is conditional upon who is around me.  Jesus didn’t act this way, Paul didn’t act this way, and neither should we.

Our relationship with God is just that, a relationship that we must continually work on in order to grow closer to Him.  If you are married, do you hide your relationship with your spouse from others that are not married?  If you have kids, do you avoid talking about your experiences of them with others who do not have kids?  Why then do we do this in regards to our relationship with God?  We have had to create this concept of being “bold in our faith” in order to motivate us to talk about God to others.  We don’t need to be bold about God; we have to be normal.  Over time, we have created this image of Christianity, which has been portrayed to the unbelieving world, and that image has now metastasized into an image we are now trying to uphold for fear of being criticized.  Why not instead set the record straight?  Why don’t we live the life Christ has demonstrated for us and called us to live despite societal and cultural pressure to maintain a certain image?  THIS is bold: to not set apart the Christian life (a lifestyle of following Christ’s example) as a status symbol and just be who we were originally created to be, children of God.  Crazy concept, isn’t it?