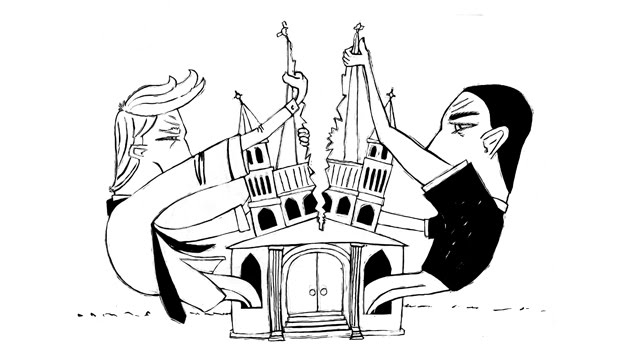 It amazes me how many different denominations of the church there are.  I’m not so much amazed by the differences in “this doctrine or that” nor “this practice or that” because for the majority the core parts of the bible are prevalent in most denominations.  However, I have found, especially in the “missionary world”, the number one defining characteristic is “to what church we belong.”  It cracks me up but saddens me at the same time because it signifies a clear distraction from following Christ.  It reminds me of my time in the Marine Corps when after finding out someone is a Marine, the very next question is, “Did you go to boot camp in Parris Island or Camp Pendleton?” Those from Parris Island think they are the best Marines because Parris Island was the original boot camp and they survived the swamp.  Those from Pendleton, on the other hand, think they survived rougher circumstances because they had to climb a mountain during the crucible.  Both sides fail to recognize the obvious: they are on the same team and are equally yoked!

The main problem I have with denominations is that it causes a sort of cultural racism amongst Christians because we all have our presuppositions and prejudices against certain denominations of Christianity.  Some believe others aren’t “true believers” because of doctrinal differences.  It’s sad how far we have strayed from the teachings of Christ.  No wonder so many people want to stay away from the church; there is so much confusion!  This is part of the plan of the enemy, to distract our focus from Christ.  Paul’s opening exhortation is about this very problem.  It would be prudent that we all listen up!

10 Now I exhort you, brethren, by the name of our Lord Jesus Christ, that you all agree and that there be no divisions among you, but that you be made complete in the same mind and in the same judgment. 11 For I have been informed concerning you, my brethren, by Chloe’s people, that there are quarrels among you. 12 Now I mean this, that each one of you is saying, “I am of Paul,” and “I of Apollos,” and “I of Cephas,” and “I of Christ.” 13 Has Christ been divided? Paul was not crucified for you, was he? Or were you baptized in the name of Paul? 14 I thank God that I baptized none of you except Crispus and Gaius, 15 so that no one would say you were baptized in my name. 16 Now I did baptize also the household of Stephanas; beyond that, I do not know whether I baptized any other. 17 For Christ did not send me to baptize, but to preach the gospel, not in cleverness of speech, so that the cross of Christ would not be made void.

It is easy for us to focus on the doctrine instead of Christ.  I’m not saying doctrine is not important, because it details for us the pillars of belief that the building/organization establishment of the church follows in order for its attendees to understand what it is they believe.  However, if we focus on the teachings of the people (ie the fallible creatures within), we remove Christ from the throne of our heart and replace Him with our teachers.  This is not to offset or negate the other teachings we read in the scriptures (some by Paul himself) about being wary of false teachers and prophets.  Rather the point is to not lose focus on Christ.  If your teacher, pastor, mentor, or whomever you are listening to is not constantly pointing to Christ and what He did on the cross, then you no longer are listening to the doctrine of Christ, but the doctrine of man.  This is the difference between our belief and following of Christ and religion (ie the doctrine of man).

This is a great opening for Paul’s letter because not only is he telling us not to follow the supposed doctrines of other people, but he is also including himself in this statement.  It sets the stage for what is to come because what we are going to discover in this letter is not Paul’s doctrine, but that of Christ.  This is why it frustrates me when people talk about the Pauline Doctrine, because it isn’t his, its God’s!  Paul is just the messenger.  In verse 17, Paul is clear that his words aren’t convincing arguments.  He isn’t trying to trick us or convince us to follow what he says because it sounds good.  Paul is merely laying out the truth and it is up to us to agree with it or deny it.  However, denying the truth doesn’t make it any less true.

Who are you going to go to for information, man or God?