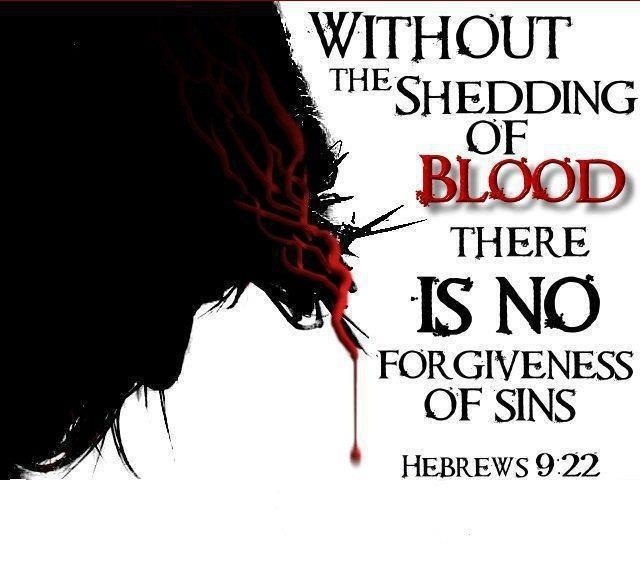 16 For where a covenant is, there must of necessity be the death of the one who made it. 17 For a covenant is valid only when men are dead, for it is never in force while the one who made it lives. 18 Therefore even the first covenant was not inaugurated without blood. 19 For when every commandment had been spoken by Moses to all the people according to the Law, he took the blood of the calves and the goats, with water and scarlet wool and hyssop, and sprinkled both the book itself and all the people, 20 saying, “This is the blood of the covenant which God commanded you.” 21 And in the same way he sprinkled both the tabernacle and all the vessels of the ministry with the blood. 22 And according to the Law, one may almost say, all things are cleansed with blood, and without shedding of blood there is no forgiveness. 23 Therefore it was necessary for the copies of the things in the heavens to be cleansed with these, but the heavenly things themselves with better sacrifices than these. 24 For Christ did not enter a holy place made with hands, a mere copy of the true one, but into heaven itself, now to appear in the presence of God for us; 25 nor was it that He would offer Himself often, as the high priest enters the holy place year by year with blood that is not his own. 26 Otherwise, He would have needed to suffer often since the foundation of the world; but now once at the consummation of the ages He has been manifested to put away sin by the sacrifice of Himself. 27 And inasmuch as it is appointed for men to die once and after this comes judgment, 28 so Christ also, having been offered once to bear the sins of many, will appear a second time for salvation without reference to sin, to those who eagerly await Him.

Covenants are sealed in blood.  Since creation, whenever there was a covenant made in the bible, an animal was slain and sacrificed to seal the covenant between two men in the presence of God.  The custom of signing a contract comes from this as it used to be a thumbprint in one’s own blood that sealed a contract.  Can you imagine if we still had this custom?  With as many contracts signed in a day around the world. That would be a lot of blood!  The point that the author is drawing out here is that covenants are sealed in blood, especially between man and God.  Animals took the place of men in the Old Testament and the blood covered the elements involved in the covenant (hence the sprinkling of the tabernacle).  However, this was just a temporary setting.

Animal blood was sprinkled as a temporary substitute for a temporary covenant in a temporary place.  The tabernacle on earth was merely a copy of the tabernacle in heaven.  The animal blood was representative of the blood of Christ.  But now, Christ’s blood satisfies the temporary for eternity.  Without the shedding of blood, there is no forgiveness.  Forgiveness costs something.  When we forgive someone of a transgression against us, we need to give something up.  If we forgive a debt, we give up the cost.  If we forgive a wrongdoing, we give our pride.  Yet the eternal ramifications of sinfulness aren’t covered by man’s forgiveness.  Men are temporary, so our forgiving of someone else’s sins falls into the temporary representation or copy category the author is referring to.  The eternal and “real” forgiveness comes from God and for that God gave up His son.

Christ’s sacrifice has removed the veil that once separated mankind from the holy of holies (ie the presence of God).  We now have access to Him and He waits as we come to Him.  This is why when Jesus died on the cross, the veil in the tabernacle was torn.  Its significance is that no longer are we subject to the division between God and man because He made a way for us to experience Him personally.  Jesus became the high priest and through Him we get to live in the presence of God instead of just being in it for a short while like the high priest did.  In John 14 we read, “6 Jesus said to him, “I am the way, and the truth, and the life; no one comes to the Father but through Me. 7 If you had known Me, you would have known My Father also; from now on you know Him, and have seen Him.”  It is by knowing Jesus, the high priest, that we are given entrance into the presence of God.

Jesus’ first words for His ministry were, “Repent, for the kingdom of heaven is at hand.”  The author is pointing out that part of Jesus’ ministry on earth was to call us to repentance.  He called us to turn away from sinfulness and towards Him as He made the way possible to God.  His second coming will be a collection of those saved by His grace and mercy.  It will be a collection of those who eagerly await Him.  This is why He will appear without reference to sin, because at that point there will be no more time to repent, only to realize the fullness of our salvation.

In this advent season I am learning that while the world awaits the coming of the biggest gift giving day of the year and Christians look forward to the day of remembering when God gave us His son as a gift, we are to harvest an attitude of waiting for when Christ will return.  The season of advent is to propel us forward into a season of waiting for the next year. It is with this study of Hebrews that we can begin to comprehend fully the purpose of Christ, His majesty, the importance of what He’s done for us, and the miracle of His return.

Do you eagerly await Him?