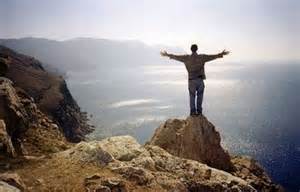 As believers in God who have entered into a relationship with Him through Jesus Christ as our propitiation, we have a different view of life than others.

7 But we have this treasure in earthen vessels, so that the surpassing greatness of the power will be of God and not from ourselves; 8 we are afflicted in every way, but not crushed; perplexed, but not despairing; 9 persecuted, but not forsaken; struck down, but not destroyed; 10 always carrying about in the body the dying of Jesus, so that the life of Jesus also may be manifested in our body. 11 For we who live are constantly being delivered over to death for Jesus’ sake, so that the life of Jesus also may be manifested in our mortal flesh. 12 So death works in us, but life in you. 13 But having the same spirit of faith, according to what is written, “I believed, therefore I spoke,” we also believe, therefore we also speak, 14 knowing that He who raised the Lord Jesus will raise us also with Jesus and will present us with you. 15 For all things are for your sakes, so that the grace which is spreading to more and more people may cause the giving of thanks to abound to the glory of God.16 Therefore we do not lose heart, but though our outer man is decaying, yet our inner man is being renewed day by day. 17 For momentary, light affliction is producing for us an eternal weight of glory far beyond all comparison, 18 while we look not at the things which are seen, but at the things which are not seen; for the things which are seen are temporal, but the things which are not seen are eternal.

Paul’s description here is of those of us who have been enlightened to a different level of living and dying.  There is a supernatural element to being in Christ that too often we forget or completely neglect.  It is very easy for us to focus just on the natural side of things and forget there is a whole other realm that exists.  This is a part of the hope and faith we have in God as a result of our relationship with Him.  Let’s read this passage again before moving on.  Go ahead, I’ll wait here…

This passage just doesn’t make sense, does it?  I mean, in the physical/ natural sense, it isn’t right.  We die so we can live?  We are falling apart so God can be glorified?  The inner man is being renewed every day as the outer man is dying?  The problem that the world has with this passage is that we fear and fight against our own mortality.  We constantly do things to defy our own aging: surgery, use chemical products, spend ridiculous amounts of money, try to appear and act as if we were 20 years younger.  We struggle against the natural order of things.  Here Paul is embracing it because he recognizes that as our physical selves die, it gives room for our spiritual growth.  Have you ever thought about why older people seem to be more connected with God than younger?  It isn’t because “their time is coming” and they figure they better make good with God before they die.  Rather it is because they have matured and parts of them have died to give way to spiritual growth: ignorance, pride, selfishness, self-indulgence, self-righteousness, and many more are all things they realize that they can’t hold on to but also aren’t worth holding onto.  They are slowly being sanctified because of the decay of their mortal bodies.  To quote my favorite movie Fight Club, they have learned to, “let that which does not truly matter go.”  They have let go because they realize that it does nothing good, it only creates a cycle of insanity: fighting against the inevitable.

Instead they have shifted focus to the things that truly matter: family, love, and eternal purpose.  Paul was gifted with learning this at an early age and we have the opportunity to do the same.  Instead of squandering years in our own worldly stupidity we get to recognize that which truly matters and pursue it.  Instead of fighting against change and growth we can embrace it.  Instead of fearing death we can welcome it because we learn that it brings us closer to spiritual purity.  The world struggles against this. The world will tell you to fight for what is rightfully yours and even what isn’t.  The world tries to resist the inevitable death of us all not recognizing that through death we get to live!  This is a lesson taught all throughout the scriptures.  Death gives us opportunity to live and Christ’s death was the ultimate death for life. We don’t just get to live physical lives, but we get to live and grow spiritually.

To close today, I’d like to quote the Apostle Paul in his letter to the Romans about the opportunity we get to experience death so that we can live anew. Romans 6:

6 What shall we say then? Are we to continue in sin so that grace may increase? 2 May it never be! How shall we who died to sin still live in it? 3 Or do you not know that all of us who have been baptized into Christ Jesus have been baptized into His death? 4 Therefore we have been buried with Him through baptism into death, so that as Christ was raised from the dead through the glory of the Father, so we too might walk in newness of life. 5 For if we have become united with Him in the likeness of His death, certainly we shall also be in the likeness of His resurrection, 6 knowing this, that our old self was crucified with Him, in order that our body of sin might be done away with, so that we would no longer be slaves to sin; 7 for he who has died is freed from sin. 8 Now if we have died with Christ, we believe that we shall also live with Him, 9 knowing that Christ, having been raised from the dead, is never to die again; death no longer is master over Him. 10 For the death that He died, He died to sin once for all; but the life that He lives, He lives to God. 11 Even so consider yourselves to be dead to sin, but alive to God in Christ Jesus.