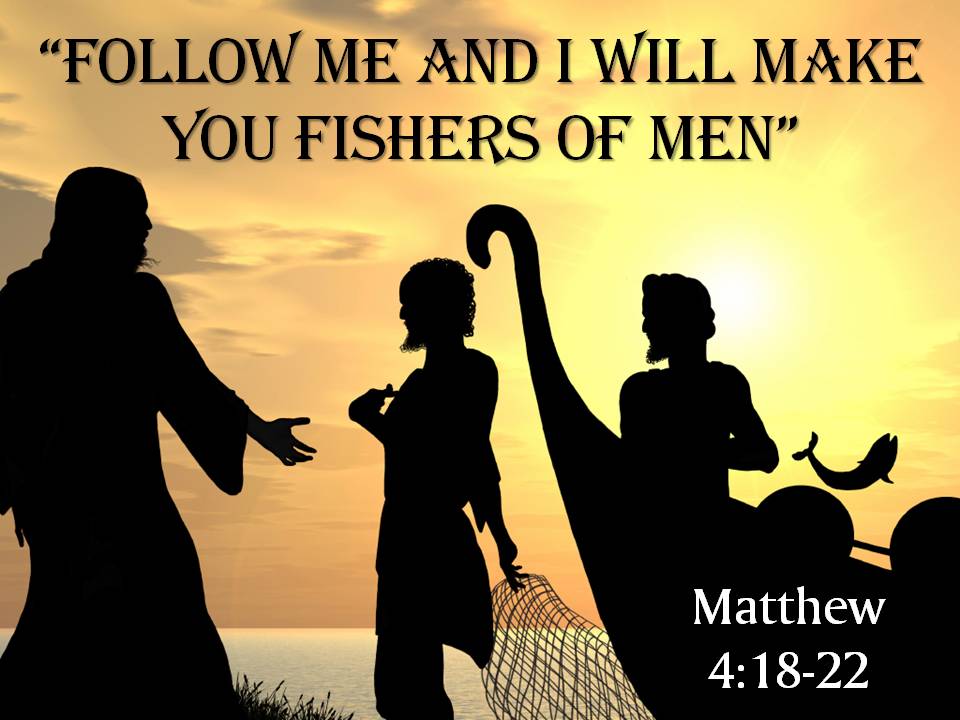 Matthew 4:18-22
18 Now as Jesus was walking by the Sea of Galilee, He saw two brothers, Simon who was called Peter, and Andrew his brother, casting a net into the sea; for they were fishermen. 19 And He said to them, “Follow Me, and I will make you fishers of men.” 20 Immediately they left their nets and followed Him. 21 Going on from there He saw two other brothers, James the son of Zebedee, and John his brother, in the boat with Zebedee their father, mending their nets; and He called them. 22 Immediately they left the boat and their father, and followed Him.

In those days, discipleship was an understood and very important thing. It is how people learned; you were taken under someone else’s wing to learn from them. You gave yourself wholeheartedly to them and they became your master. They were the expert in whatever it was that you were trying to learn and you did what they said. Notice that while it comes across as a command, these men still had the option of refusing Jesus. They could have continued in whatever it is they were doing and lived their lives in this path. Yet, they decided to abandon it all and fully commit to Jesus. This is where we fall short these days.

When it comes to discipleship, we have lost sight of what it means to be a disciple. There is a local pastor we work with here in Guatemala that literally takes in 2-3 disciples for a couple years at a time to teach them how to be godly men. Him and his wife do not have children, but they become their children. They make an agreement with their parents (if they have them) and the boys live with them and share life with the pastor learning by example. This is what Jesus did with His disciples! Yet we have reduced discipleship down to having a one-hour meeting once a week or just regularly going to church on Sundays. This isn’t discipleship; this is laziness.

Jesus had more than just His 12. There were hundreds and eventually thousands that would follow Him around day after day watching what He did and listening to His teaching. Not everyone was as close to Him as the 12. Who are you close to that is teaching you? Who are you teaching? Discipleship is about sharing life together and learning from a teacher. Then we are to pass on these teachings to others (yes, even if you aren’t a gifted teacher). Discipleship is a command, not an option.

These men chose to drop everything they had and follow Jesus with the understanding that they would fully rely on Him and He would provide all they needed. You never read about Jesus and the disciples going without food, clothing, or shelter. So why then don’t we fully commit to Him? Why don’t we seek out others to teach what we have learned about the Kingdom of God? Why don’t we seek out someone to teach us? We are falling short as a church because we have fallen short in discipleship.