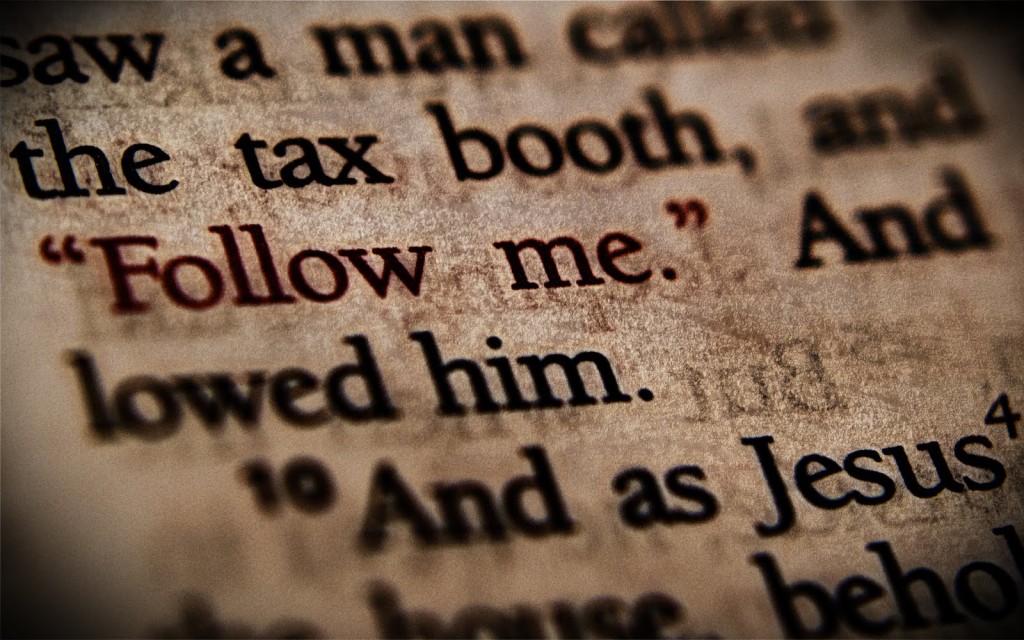 Matthew 9:9
9 As Jesus went on from there, He saw a man called Matthew, sitting in the tax collector’s booth; and He said to him, “Follow Me!” And he got up and followed Him.

This very Matthew is the author of this version of the Gospel. He was a tax collector, hated by his own people because to them he was a traitor, helping their oppressive government take money from them. What’s more, most tax collectors overcharged the people to make more money. They had become corrupt in their business, influenced by the Roman government.

The call to “follow Jesus” was not a light one. These two words translated from the one word akoloutheo in Greek (but most likely the Hebrew equivalent was used) held a lot of weight in that time. Jewish boys until the age of 12 or 13 studied hard to be accepted as disciples by Rabbis. They worked hard to memorize the scriptures so that when they were the appropriate age, they would be invited by a Rabbi to “follow him” into discipleship. The boy would then be taken in by the Rabbi and taught everything he could to grow up and be a strong man in the Jewish religion. The people that Jesus was inviting to follow Him were grown men established in their professions. While these men never had imagined someone would invite them to “follow him” at this age, we can see that they still had a desire to be closer to God even though their professions didn’t seem very godly.

This same invitation is extended to us. Throughout Jesus’ teachings, as we will see, He constantly tells us the importance of following Him. We will even read in the end of Matthew that Jesus calls us to bring others to follow Him as well. In Jesus’ call to discipleship, we must understand that it is a call to drop everything and only follow His commands. We must leave behind everything, abandon all, and only listen to His words and emulate His example. Once we learn to follow Him, we then must urge others to do the same because we learn that following Him isn’t just a way of living, but the only way.

As we reflect upon His way to the cross this week, let us contemplate if we are truly following Him or not. Would we follow Him to the cross? Would we be there to help Him carry it when His body gives out? Would we be trying to fight a cohort of Roman soldiers or understand that the path He must take is God’s will? When we think of the word “disciple,” we must understand what it really means. Following Jesus isn’t something we do when it is convenient for us. He becomes our teacher, our provider, our protector, our counselor, and much more. Jesus is the one we completely depend upon. We no longer follow anything or anyone else but Him. These men understood that when they answered the call “Follow Me.” Now that you understand it, will you?

One very important aspect of Jesus calling Matthew to follow Him we must consider is that Matthew was a middle aged man who worked for the “enemy” and was a cheat and thief. He wasn’t perfect in religion and might very well have given up on God at that point. His people hated him, his family could have disowned him, and he was focused on making money. By religious standards, he was certainly unqualified to be a religious disciple. I love learning about the people Jesus called to be His first and closest disciples. It wasn’t their own pedigree or background that made them good disciples. It was their willingness to follow Jesus and Jesus’ ability to transform them. So let’s not get hung up on whether or not we are good enough; we will never be good enough. This was the rabbinical “religious” way of selecting disciples; it is how they chose who had the most potential for greatness. Jesus chose His disciples based on the greatest potential for God to be glorified. The important factor is: are you willing?