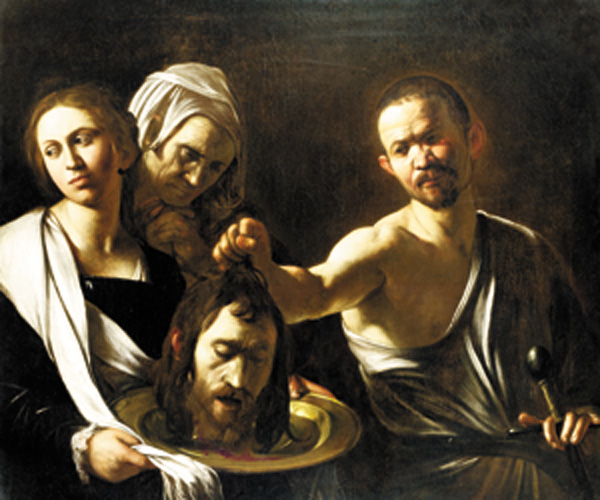 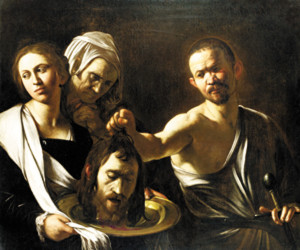 Mark 6:14-29
14 And King Herod heard of it, for His name had become well known; and people were saying, “John the Baptist has risen from the dead, and that is why these miraculous powers are at work in Him.” 15 But others were saying, “He is Elijah.” And others were saying, “He is a prophet, like one of the prophets of old.” 16 But when Herod heard of it, he kept saying, “John, whom I beheaded, has risen!” 17 For Herod himself had sent and had John arrested and bound in prison on account of Herodias, the wife of his brother Philip, because he had married her. 18 For John had been saying to Herod, “It is not lawful for you to have your brother’s wife.” 19 Herodias had a grudge against him and wanted to put him to death and could not do so; 20 for Herod was afraid of John, knowing that he was a righteous and holy man, and he kept him safe. And when he heard him, he was very perplexed; but he used to enjoy listening to him. 21 A strategic day came when Herod on his birthday gave a banquet for his lords and military commanders and the leading men of Galilee; 22 and when the daughter of Herodias herself came in and danced, she pleased Herod and his dinner guests; and the king said to the girl, “Ask me for whatever you want and I will give it to you.” 23 And he swore to her, “Whatever you ask of me, I will give it to you; up to half of my kingdom.” 24 And she went out and said to her mother, “What shall I ask for?” And she said, “The head of John the Baptist.” 25 Immediately she came in a hurry to the king and asked, saying, “I want you to give me at once the head of John the Baptist on a platter.” 26 And although the king was very sorry, yet because of his oaths and because of his dinner guests, he was unwilling to refuse her. 27 Immediately the king sent an executioner and commanded him to bring back his head. And he went and had him beheaded in the prison, 28 and brought his head on a platter, and gave it to the girl; and the girl gave it to her mother. 29 When his disciples heard about this, they came and took away his body and laid it in a tomb.

Here we find Mark’s telling of the story of what happened to John the Baptist, Jesus’ cousin.  As is common in most biblical stories, when we read these accounts we tend to put ourselves in the place of the hero or “good guy,” but how often do we consider that we could in fact be the bad guys?  Our natural tendency to be evil and selfish lends us to identify more with the antagonist of the story.  Let us examine the heart of Herod.

Herod respected and feared John the Baptist.  Jesus came after John was already well known.  John had preached about the coming of the Kingdom of God (Jesus preached that it had arrived).  Being a king himself, Herod understood the perplexities of another kingdom, especially one that seemed to be infringing upon his own sovereignty, although the way John taught it this was a more of imaginary kingdom (looking at it from Herod’s perspective).  Although John seemed to be a very peculiar man, Herod respected him for his honesty and forthright manner of speaking.  John’s message was challenging and comforting at the same time.  Herod was worried for his own life yet intrigued at the message.

The apostles taught a lot about the lusts of the flesh and being tied to our previous lives as sinners.  Herod was not a follower of John the Baptist, but he might have been on the verge of believing what he was teaching.  Unfortunately for him, he was too tied to the world around him: giving in to the lusts of the flesh.  Until he had that party, he seemed to be in a conflicted situation.  John the Baptist challenged him and seemed to be slowly infringing upon his sovereignty, but at the same time he recognized that John was a man of God: righteous and powerful.  What is a king to do?  The situation with his wife’s daughter provided a perfect excuse for him to “solve” the problem without feeling too guilty…at first.  In his mind, it was not necessarily his fault that John was beheaded; it was the request of the girl to whom he promised almost everything.  Verse 26 reveals this sentiment.  One may speculate if this was all a set up from the beginning, but we are not here to speculate.

The issue to contemplate is how tricky we are in our minds to get what we want without feeling too responsible about it.  We are masters at finding loopholes and exceptions.  We reason with ourselves to help us feel ok with our sinfulness even though we know deep down that we are wrong.  In this case, Herod wouldn’t have thought that John rose from the dead and come back more powerful than he was before.  His conscience and knowledge of the truth drove him to a bit of a ridiculous conclusion, as if John had come back from the dead to finally take over Herod’s kingdom.  How many times have we imagined that our sins have “come back to haunt us”?  Ironically, this is exactly why John was teaching a message of repentance, so that our past sins will not control us in the future.  Our sinfulness remains a burden until we do something about them.

When we sin, we tie our own hands together.  It gives our spiritual enemy control of us and he drags us through the mud in fear and trembling.  Taking a step back and looking at the bigger picture, our sinfulness is quite silly, really.  Most of the sins we commit are stupid little actions that grew out of our thoughts that afterwards we knew we probably shouldn’t have done, but we did them anyway.  Then we are trapped: tied and controlled by the one who wishes you harm.  If we have sinned, let us repent.  If we have yet not, let us avoid it at all costs.  James, Jesus’ brother wrote this in chapter 1 of his letter:

[quote]12 Blessed is a man who perseveres under trial; for once he has been approved, he will receive the crown of life which the Lord has promised to those who love Him. 13 Let no one say when he is tempted, “I am being tempted by God “; for God cannot be tempted by evil, and He Himself does not tempt anyone. 14 But each one is tempted when he is carried away and enticed by his own lust. 15 Then when lust has conceived, it gives birth to sin; and when sin is accomplished, it brings forth death. 16 Do not be deceived, my beloved brethren. 17 Every good thing given and every perfect gift is from above, coming down from the Father of lights, with whom there is no variation or shifting shadow.[/quote]

In Herod’s situation, we can clearly see the battle with lust and sin we have every day.  Let us, for a moment, recognize this doesn’t just mean sexual lust, but our lust to sin in whatever way entices us.  Do you make excuses to justify your actions?  Do you negotiate with yourself what would be an “ok sin” or a “lesser sin”?  God calls us to trust in Him and remain faithful and true, regardless of the consequences.  If Herod would have denied beheading John the Baptist, he would have dishonored his family and seemed very much a dishonorable king.  So, for his own good (and convincingly for the good of the people) he beheaded John even though he knew it was the wrong thing to do.  What decisions are you making in your life today that are beheading righteousness for your own selfish gain?

[quote]1 Therefore, since Christ has suffered in the flesh, arm yourselves also with the same purpose, because he who has suffered in the flesh has ceased from sin, 2 so as to live the rest of the time in the flesh no longer for the lusts of men, but for the will of God. 3 For the time already past is sufficient for you to have carried out the desire of the Gentiles, having pursued a course of sensuality, lusts, drunkenness, carousing, drinking parties and abominable idolatries. 4 In all this, they are surprised that you do not run with them into the same excesses of dissipation, and they malign you; 5 but they will give account to Him who is ready to judge the living and the dead.[/quote]