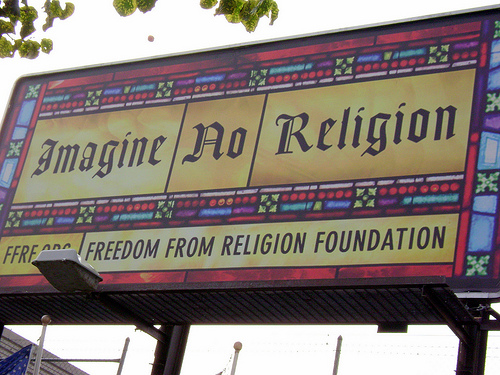 Jesus has granted us freedom from religion.

Hebrews 13:7-17
7 Remember those who led you, who spoke the word of God to you; and considering the result of their conduct, imitate their faith. 8 Jesus Christ is the same yesterday and today and forever. 9 Do not be carried away by varied and strange teachings; for it is good for the heart to be strengthened by grace, not by foods, through which those who were so occupied were not benefited. 10 We have an altar from which those who serve the tabernacle have no right to eat. 11 For the bodies of those animals whose blood is brought into the holy place by the high priest as an offering for sin, are burned outside the camp. 12 Therefore Jesus also, that He might sanctify the people through His own blood, suffered outside the gate. 13 So, let us go out to Him outside the camp, bearing His reproach. 14 For here we do not have a lasting city, but we are seeking the city which is to come. 15 Through Him then, let us continually offer up a sacrifice of praise to God, that is, the fruit of lips that give thanks to His name. 16 And do not neglect doing good and sharing, for with such sacrifices God is pleased. 17 Obey your leaders and submit to them, for they keep watch over your souls as those who will give an account. Let them do this with joy and not with grief, for this would be unprofitable for you.

How do we know who to follow as spiritual leaders?  There are many warnings throughout scripture (this one included) about false teachers and false prophets, “wolves in sheep’s clothing” that can lead us astray spiritually, but how do we know who they are?  Quite honestly as I read these warnings I get a bit dismayed and frightened because of what we read can happen to those who are led astray.  So, how then do I know if I’m being taught the truth?  Part of me wants to listen to nobody so that I don’t have to worry about it.  Yet again, the bible tells us that there are spiritual leaders in place to guide us.

Today’s passage uses the example of Jewish religion to reveal the difference.  Using the example of animal sacrifice and blessed food, the author details religious holiness versus the holiness we have been clothed with by Christ’s sacrifice.  While religion enslaves us with its rules and rituals, Jesus frees us from these obligatory preoccupations of trying to be good and holy enough to win audience with God and instead grants us intimacy with Him so that we can live in the freedom of His grace.  For the nonbeliever, this is usually a frustrating concept because the outside world lumps it all together.  Humanity thinks that believing in a higher being is religion.  However religion is the manmade structure of rules that drive them to try to realize a higher level of living.  Following Jesus (aka Christianity in some cases) is a whole different concept.  This is what the author of Hebrews has been trying to explain to converted Jews of the time in this letter.  What we read today is the closing thesis of his argument.

Instead of trying to earn our way to a higher level of understanding, we get to bask in the glory and mercy and grace of God.  Instead of trying to work our way and be good enough to get a glimpse of God and who He is, we get to experience the fullness of His freedom and live righteous and holy lives as a result.  Do you notice the difference?  Instead of striving to achieve it, it has been achieved for us so we can live on the other side!  We can live enslaved to religion (ie the revelation of sinfulness and our frailty in trying to overcome it on our own) or we can live in the freedom of knowing it has been overcome for us!  Let us not become shortsighted in this, however.

In verses 15-17 we read that our thanks to God is to do good and follow His will for our lives.  It’s becoming a voluntary servant of His out of reverence for what He has done for us.  This isn’t to be confused with doing good so that we can be saved or earn our ticket to heaven.  It’s like when someone saves our lives the natural response is to feel indebted to our savior in some way because of what they have done for us.  We don’t earn our right to be saved, we become saved and then honor the one who saved us.  The same applies to our relationship with God and through it He continues to reveal His majesty and power to us, giving us the blessing of all that He is.  In our relationship with God, He shares with us what He has.

Verse 17 might seem a bit out of place and unrelated, but it reveals to us (in retrospect of what we have just read) how we can identify righteous spiritual leaders.  Those who follow Christ, the ultimate servant leader of the faith, and exemplify what I just explained are those we should follow.  How do we learn if they are following Christ?  Compare their words (and hopefully matching actions) to Christ’s words and actions.  His example has been preserved over centuries through the bible so that we can know how to follow Christ and who His followers are.

One of my favorite quotes about Christianity is from Mahatma Gandhi, “I like your Christ, I do not like your Christians. Your Christians are so unlike your Christ.”  If we claim to be Christian or follow a Christian leader that is not like Christ, then we are missing something.  Jesus taught us that we are free from religion when we are in a relationship with God and that religion actually impedes our relationship with God.  Spiritually we have been freed from this bondage of religion (the revelation of the burden and consequences of sin) and therefore have the power and ability to live a life not submitted to sin.  This isn’t to be confused with only being freed fromthe implications of sin – the “cheap grace” Bonhoeffer teaches about, but continuing to do it anyway.  Rather, we are now able to leave behind our lives of sexual addiction, inappropriate anger, greed and covetousness, lying and deception, substance abuse, and many other things that we think we enjoy doing but are only fooling ourselves.  It enslaves us and religion says, “you are guilty and must pay for what you have done,” when Jesus says, “I have paid for what you have done, why would you continue to be a slave to it?” 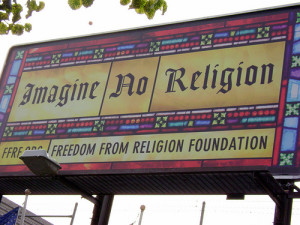 My featured picture today really cracks me up, because Jesus imagined a world free from religion as well.  While this atheist group thinks they are fighting against Jesus’ message, they are actually promoting it!  He taught about our failure to understand the freedom of God but we continue to rely on religion instead and then wonder why God doesn’t deliver.  It frustrates me that we took Jesus’ teachings against religion…and made a religion about it!  We have taken His words of freedom and the gift He has bestowed for us and twisted it into man-made hierarchy that enslaves us all the more!  The word “Christianity” should invoke thoughts of those devoted to following Jesus Christ, not people who go to church every Sunday and pretend to be holy but secretly (or even publicly) continue to be enslaved by sin and religious practice.

Some of you might scoff at this video from 2 years ago, but try to watch it again in light of what we just read.