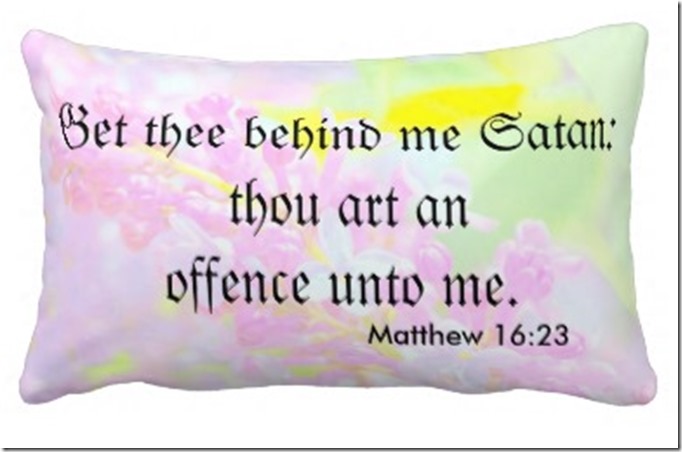 Matthew 16:21-23
21 From that time Jesus began to show His disciples that He must go to Jerusalem, and suffer many things from the elders and chief priests and scribes, and be killed, and be raised up on the third day. 22 Peter took Him aside and began to rebuke Him, saying, “God forbid it, Lord! This shall never happen to You.” 23 But He turned and said to Peter, “Get behind Me, Satan! You are a stumbling block to Me; for you are not setting your mind on God’s interests, but man’s.”

Jesus’ words seem quite abrupt and harsh to Peter, don’t they?  We can pull a lot out of context, but the tone and look that Jesus gave Peter we cannot.  Did Jesus really call Peter “Satan”?  Did He really mean it the way we interpret it?  I’m quite sure He didn’t say it with a smile.  John Gill summarizes this interaction nicely:

But it seems rather to mean the devil, who took the advantage of Peter’s weakness and ignorance; and put him upon dissuading Christ from suffering for the salvation of his people: though it should be known, that the word Satan is used by the Jews to signify the vitiosity and corruption of nature; of which they say, this is Satan. So the messenger, or angel Satan, may be thought to be the same.  And then our Lord’s sense is, “be gone from me, I cannot bear the sight of thee; thou art under the influence of the corruption of thy heart and nature; thou talkest like a carnal and not like a spiritual man,” and therefore Christ denominates him from his carnality.

We see a few times in the scriptures where Peter fights for what he thinks is best but does so without being able to see the bigger picture.  He fights the guard’s slave when they try to arrest Jesus.  He denies Jesus washing his feet and then misses the point when he says, “well wash all of me then, my Lord.”  Peter was over the top.  He was absolutely zealous for Christ.  However, he always struggled with listening and following.  Even when he had his dream, he struggled against Jesus about what food to eat and not to eat.  Some see this type of personality as foolish, other as admirable.  Regardless of how we see it, Jesus sees it as an obstruction to the advancement of the Kingdom of God.

It is interesting to note that just before this little interaction, Jesus called Peter blessed because of God’s revelation to him.  Peter continued, despite his faults, to grow as a strong leader for the new church movement.  He was not “bad” per se, but because he was so outspoken we see him a majority of the times make mistakes.  He made his mistakes out in the open at full speed.  Others made theirs quietly and with reservation.  At the very least, these things helped the other 11 learn.  Thankfully, we can learn from them too.

How often do we fail to see the bigger picture of God’s plan?  It is true that none of us will ever have the whole picture, even Jesus doesn’t.  But when situations arise and we want to react, what would happen if we asked God about it first?  What if we were so in tune with God’s Spirit living in us that our reaction was always in line with His will?  I think that as we all take this journey of realizing God’s will for our lives and His purpose for us on this earth, we have thousands of opportunities to either be a stumbling block to Jesus’ mission and get pushed out of the way or to be a part of the solution by aligning ourselves with Him.  In John 15 we have a record of Jesus talking to His disciples about what it means to abide in Him and align ourselves with the Kingdom.  In this moment of Matthew, Peter was not abiding in Him nor the Father, but his own desires.  It is important for us to recognize our character, our flaws, and how they affect our relationship and oneness with God so that we can work against that sinful nature and be closer to Him.

Just as He did to Jesus, God wants to show us a bit more of the bigger picture so that when situations arise, we can make the decisions that glorify Him.  We don’t need to see everything, but we do need to know what God’s will is as we continue on through life.