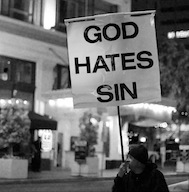 When I first read today’s post, the final verse distracted me from the previous verses.  It is one we know well, as it is used as a tool in our daily spiritual warfare when the enemy tempts us with sinfulness.  But let us not miss the first 12 verses.

10 For I do not want you to be unaware, brethren, that our fathers were all under the cloud and all passed through the sea; 2 and all were baptized into Moses in the cloud and in the sea; 3 and all ate the same spiritual food; 4 and all drank the same spiritual drink, for they were drinking from a spiritual rock which followed them; and the rock was Christ. 5 Nevertheless, with most of them God was not well-pleased; for they were laid low in the wilderness. 6 Now these things happened as examples for us, so that we would not crave evil things as they also craved. 7 Do not be idolaters, as some of them were; as it is written, “The people sat down to eat and drink, and stood up to play.” 8 Nor let us act immorally, as some of them did, and twenty-three thousand fell in one day. 9 Nor let us try the Lord, as some of them did, and were destroyed by the serpents. 10 Nor grumble, as some of them did, and were destroyed by the destroyer. 11 Now these things happened to them as an example, and they were written for our instruction, upon whom the ends of the ages have come. 12 Therefore let him who thinks he stands take heed that he does not fall. 13 No temptation has overtaken you but such as is common to man; and God is faithful, who will not allow you to be tempted beyond what you are able, but with the temptation will provide the way of escape also, so that you will be able to endure it.

It is far too easy for us to look at the Old Testament as something that is worth skipping over.  As I posed in cut and paste theology, how often do we skip the first 2/3 of a book?  We need to get a firm understanding of the foundation of the story before we read the ending, or else the ending might not have as significant of an impact.  I’m just as guilty of this as anyone.  If you consistently follow my studies on here, you will notice that I have only thoroughly studied 1 of the many Old Testament books.  What does Paul remind us of, though?  These things happened to them as an example, and they were written for our instruction, upon whom the ends of the ages have come.

I think part of our problem is that we fear the God of the Old Testament.  Many people were “smited” because of their sinfulness and lack of faith.  We don’t want to believe God did or does those things, so we avoid it.  However, just because we choose not to recognize something doesn’t change if it is true or not.  Instead of ignoring the Old Testament (or plucking out parts we want when it suits us), we need to embrace the story that is in it because it is so important.  Some may think, “well, Jesus isn’t in the Old Testament, so what’s the big deal?”  Verse 4 highlights the presence of God through Christ in the Old Testament.  Jesus is God, so therefore if God was present in those times, so was Jesus.

Paul’s point in this passage isn’t focused on verse 13, it is focused on everything before.  He is pointing out how much God hates sinfulness, because it leads to the destruction of man.  In another letter he says, “…for the wage of sin is death…”  I feel this is the point that some would ask, “but why would a supposedly loving God do something like that?”  For one, based on the congruency of scripture, those people didn’t have a chance.  It’s not as if they were going ot turn around one day and god cut them short in a “sorry about your bad luck” kind of way.  Just like Sodom and Gomorrah, our all knowing God knew that if given eternity, those people would not turn from their ways and honor God.  They were spiritually dead before they were physically dead.  But God uses the examples of the wicked and spiritually dead to show us the price we pay for being so.

I might seem like a broken record when I say this, but the point of showing us what happens when we are caught up in sinfulness is not for God to make Himself feel powerful.  He spoke everything into existence; I think He knows how powerful He is.  Rather, the point is that when we sin, we act outside of our design.  Part of that design is being in communion with Him but we continually rebel against Him.  We cannot be in communion with Him if we act differently than this.  Fortunately, He did the work to bridge that gap, so despite our sinfulness and rebellion, we can once again live in communion with Him.  Some think this is ridiculous. Some don’t want to believe it because they don’t think it makes sense.  Others scoff at the idea, but it doesn’t make it any less true.

So, does God hate us?  No.  He certainly hates sinfulness though, because it destroys us.  He loves us because we are His children.  However, our rebellion and iniquity pulls us from Him and this is why He hates it so much.  He knows what will happen to us and how much we suffer from being enslaved to sin.