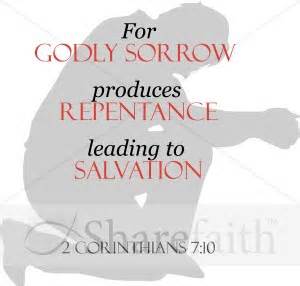 8 For though I caused you sorrow by my letter, I do not regret it; though I did regret it—for I see that that letter caused you sorrow, though only for a while— 9 I now rejoice, not that you were made sorrowful, but that you were made sorrowful to the point of repentance; for you were made sorrowful according to the will of God, so that you might not suffer loss in anything through us. 10 For the sorrow that is according to the will of God produces a repentance without regret, leading to salvation, but the sorrow of the world produces death. 11 For behold what earnestness this very thing, this godly sorrow, has produced in you: what vindication of yourselves, what indignation, what fear, what longing, what zeal, what avenging of wrong! In everything you demonstrated yourselves to be innocent in the matter. 12 So although I wrote to you, it was not for the sake of the offender nor for the sake of the one offended, but that your earnestness on our behalf might be made known to you in the sight of God. 13 For this reason we have been comforted. And besides our comfort, we rejoiced even much more for the joy of Titus, because his spirit has been refreshed by you all.

After reading this passage I am reminded of a popular verse, Romans 8:28 And we know that God causes all things to work together for good to those who love God, to those who are called according to His purpose.  We read this passage today and see Paul’s feelings about the sorrow he caused the Corinthians by his letter of exhortation.  But what does this mean for us?  How does this apply to today?

Various times throughout the scriptures we see this reaction to God’s truth.  It is the light that exposes that which is in the dark.  I mentioned yesterday that we are not here to condemn others, rather to help each other when we are weak.  Paul was trying to help the Corinthians when they were weak and not following Christ as they said they were.  He exposed their wrongs and they understood that what they had been doing was wrong.  Their sorrow was the human emotion to this.  Nobody likes to be told they are wrong, but if they truly are followers of God, they will repent just like the Corinthians did.  We see this in verse 10, that the breaking of our own hearts in recognition of our own iniquity leads us to hunger and thirsting for righteousness.  Whereas the world causes us to resist and fight.

The church’s first martyr, Stephen, was martyred because the people didn’t like what he was telling them.  You can read his sermon in Acts 7.  As he preached the truth of God the people got angry with him because he was exposing their iniquities and they had a choice to make.  Their choice was to kill the man so he would shut up, but it wasn’t the man exposing them, it was the Word of God.  Their worldly sorrow took hold and they fought back.

As we continue through the passage, Paul mentions in verse 12 that some were not guilty of the things he wrote about, however it still produced a good result.  It refreshed their minds of how God calls us to live for His righteousness and glory.  The end result rejuvenated all, including Paul and Titus.  What type of sorrow are you experiencing?  When you read the Word of God, it illuminates your iniquities against Him, but how will you react?  To you fight back in worldly manner, trying to protect your pride and current way of life?  Or do you recognize the bondage of sinfulness you are in?  Will you not turn away from this and take hold of the freedom of Christ?