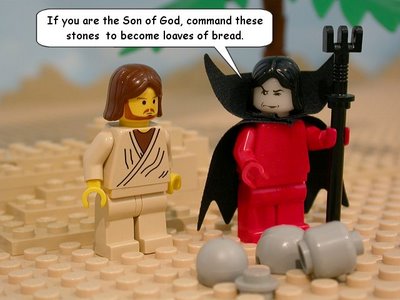 Matthew 4:2-4
2 And after He had fasted forty days and forty nights, He then became hungry. 3 And the tempter came and said to Him, “If You are the Son of God, command that these stones become bread.” 4 But He answered and said, “It is written, ‘MAN SHALL NOT LIVE ON BREAD ALONE, BUT ON EVERY WORD THAT PROCEEDS OUT OF THE MOUTH OF GOD.’ ”

The majority of Christians have heard about Jesus’ time of fasting and temptations from Satan, but have we ever stopped to understand Jesus’ responses? His quote is from Deuteronomy 8:3

He humbled you and let you be hungry, and fed you with manna which you did not know, nor did your fathers know, that He might make you understand that man does not live by bread alone, but man lives by everything that proceeds out of the mouth of the LORD.

Satan was tempting Jesus to make for Himself bread out of the stones, appealing to pride by using “if you are the Son of God…” Jesus proved two things in His response: He doesn’t have to prove to Himself or anyone else who He is and that He was still following the leading of the Holy Spirit instead of what others were suggesting He do. Sometimes we may look at this passage and think, “well, turning stones into bread isn’t a sin and Jesus had finished His fast, so what is the big deal here?” The sin isn’t in the action, it is in the heart behind the action. Jesus was following the Holy Spirit’s guidance which was telling Him not to do what the tempter was suggesting. This is how we get caught up and drawn away from God’s will in our lives. We listen to that little voice that says, “well, doing such-and-such isn’t a sin, so what’s the big deal?” Just like that we are pulled into listening to the tempter’s reasoning instead of the Spirit’s guidance.

Jesus’ response and reference not only tells Satan “no,” but also responds with a “why not.” To rephrase Deuteronomy and Jesus reference to it, let’s think of it this way: “Man should not rely on man’s ideas, but instead focus on what God is telling him.” This is why it is so crucial for us to continually study God’s Word. It isn’t just about memorizing the scriptures to “know” what God has said or continues saying through them, but also knowing the character of God so we know it is Him we are listening to through the Holy Spirit. Just like receiving messages from your friends or family, you know how they speak and what they would say so despite the name of the person you are receiving the messages from, you know who the person is because you know their character. You would even say, “that is a bit out of character for them,” if you received a message or response that didn’t seem to fit how they normally behave. The same happens with God. We need to study who He is and how He speaks so when we hear, “turn those stones to bread,” we know who is talking.

This is a very important aspect of our relationship with God. Communication is important in any relationship and our relationship with Him isn’t any different. We need to be confident to speak to Him and know when He is talking to us. If we call Him Lord, then we must not only understand when He speaks, but also obey what He says. This is what Jesus was exemplifying in His response to Satan. Are you able to differentiate between when the tempter is speaking to you and the Spirit is speaking to you? If so, how do you respond? Is it easier as a human to do what the tempter suggests instead of the Spirit? How can you better learn to understand and obey the guidance of the Spirit?