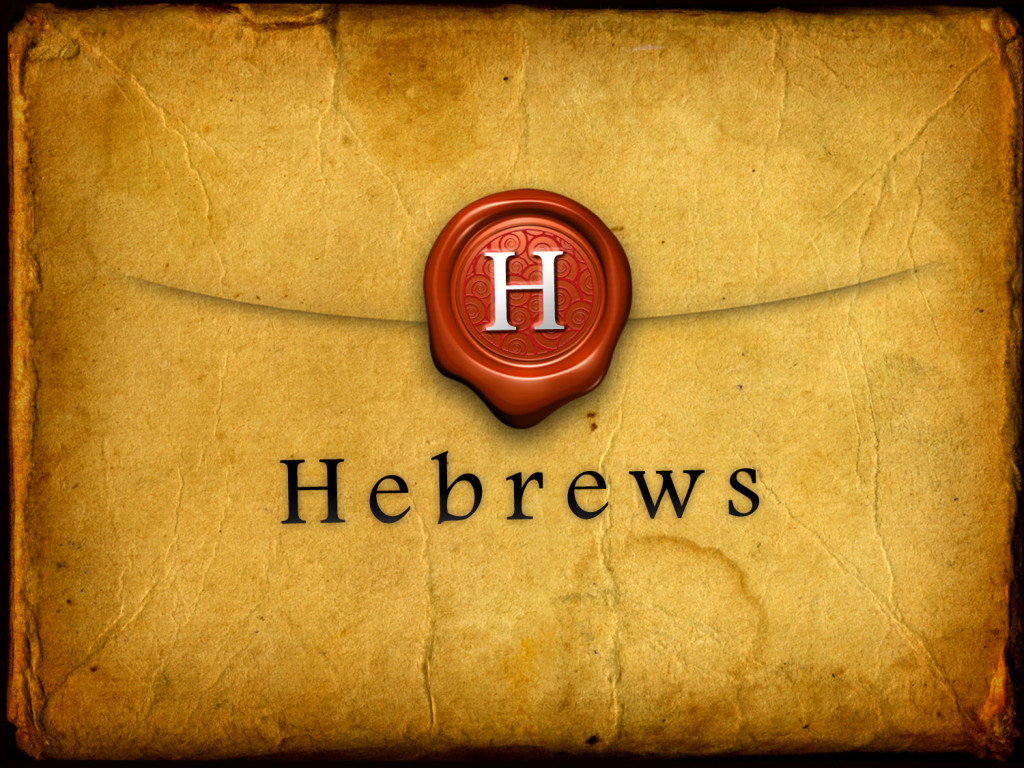 The book of Hebrews scares and excites me at the same time.  I’ve always had an interest in studying deeper Judaic Law to better understand it since it is the example of why we need Christ in our lives.  The Letter to the Hebrews was “intended to encourage a group of people who were tempted to abandon their faith because of the pressure of persecution and because of their attachment to the older revelation of the law.” (Tenney, New Testament Survey)  This letter is thick with theology and Judaic law. Scholars have yet to pinpoint who wrote this letter, although its content mimics that of the Apostle Paul.  The way it is written, however, leads others to believe it was someone close to Paul.  Of course, the author fails to name himself in the letter.

One of the important things to remember about the Jews is that they believe in God the Father.  Their doctrine and lives are built upon the existence of God.  It is The Law, which exposes the sinfulness of man and the frailty of trying to sanctify oneself in order to have a relationship with Him that is engrained in them.  Just like all the habits we learned and engrained in ourselves before we came to Christ, the Jews struggle with the newness of life that is found in Jesus.  The author intends to explain that Jesus is this very same God and that what He did on the cross has relieved them from the bondage of trying to be perfect so they can celebrate their relationship with Him instead of being oppressed by sinfulness.

1 God, after He spoke long ago to the fathers in the prophets in many portions and in many ways, 2 in these last days has spoken to us in His Son, whom He appointed heir of all things, through whom also He made the world. 3 And He is the radiance of His glory and the exact representation of His nature, and upholds all things by the word of His power. When He had made purification of sins, He sat down at the right hand of the Majesty on high, 4 having become as much better than the angels, as He has inherited a more excellent name than they.

Let’s pause at the first two verses.  I want to link this to other parts of the bible that support the world being created through Christ.  In the beginning of the Gospel according to John, we read a popular description of Jesus, “In the beginning was the Word, and the Word was with God, and the Word was God. 2 He was in the beginning with God. 3 All things came into being through Him, and apart from Him nothing came into being that has come into being. 4 In Him was life, and the life was the Light of men.”  It is a little hard for us to see the world being created through Jesus, as if He were some sort of filter through which things happened.  But when we flip all the way back to Genesis where the creation story is recorded, there is a little phrase that is repeated over and over just before things are created: Then God said.  This phrase is the action describing when someone (in this case God) sets in motion the propulsion of words.  These words weren’t just a desire or a command; it was the very essence of Christ.

Who was Jesus on earth?  The exact representation of His (God’s) nature.  Jesus was the representative of God to us in a way we could understand so we can better represent Him.  Until then, the world and more specifically the Jews, received instruction through prophets from God and learned His precepts as they were passed along.  When Jesus arrived on the scene, He was the best human translation of godliness we have ever witnessed.  He didn’t just come to purify sins, but to show us how to live.  We are continually missing the point of Jesus’ ministry here.  We think it was to show us how to build a religion or faith system, when rather it was to see what it looks like to have an intimate relationship with God.  Remember all the times He broke “The Law”?  He healed and collected grain on the Sabbath.  He was countercultural because the culture was built around men instead of God.  Even as much as they tried to build it around God and justified it as so, they were still selfish and focused more on the rules than on God.  We would do good to better study the teachings of Jesus to understand His example and what is possible.  Before He left this earth He said, “he who believes in Me, the works that I do, he will do also; and greater works than these he will do.”  So then, if we are true followers and believers of Christ, where are these greater works?