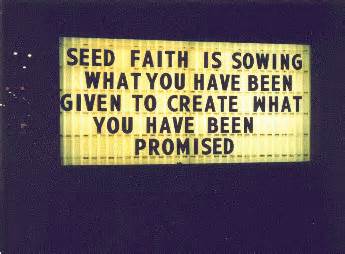 Acts 14:8-10
8 At Lystra a man was sitting who had no strength in his feet, lame from his mother’s womb, who had never walked. 9 This man was listening to Paul as he spoke, who, when he had fixed his gaze on him and had seen that he had faith to be made well, 10 said with a loud voice, “Stand upright on your feet.” And he leaped up and began to walk.

Faith is a difficult concept.  The word itself is used in many different ways but do we truly understand what it means?  Recognize here that Paul wasn’t the one who had the faith to heal the man; rather the man had the faith to be made well.  This is like a leader seeing the potential in one of his subordinates and giving him an opportunity to be used for his full potential.

The original Greek word used here is pistis, which translated is meant to represent “the conviction of the truth of anything.”  We have all heard the definition of faith from Hebrews 11:

1 Now faith is the assurance of things hoped for, the conviction of things not seen. 2 For by it the men of old gained approval. 3 By faith we understand that the worlds were prepared by the word of God, so that what is seen was not made out of things which are visible.

Furthermore, in Romans 10 we read that:

17 So faith comes from hearing, and hearing by the word of Christ.

So, what exactly is faith?  Faith in anything (not just God) is about trusting what you hear.  It is about trusting something or someone for what they say without needing proof.  It’s easy to believe something you see.  Sometimes we feel as though we cannot believe what we see; yet the fact that we saw it makes it irrefutable.  The story of Thomas, the one disciple of the twelve that was not present when Jesus first appeared to them after His resurrection did not believe what they told him.  They told him that Jesus was resurrected yet he said he would not believe it until he sees it for himself.  After Jesus revealed to him the scars in his hands, feet, and side, Thomas said, “Ok, now I believe.”  Jesus rebukes his lack of faith in John 20:

29 Jesus said to him, “Because you have seen Me, have you believed? Blessed are they who did not see, and yet believed.”

How many of us are like Thomas?  This goes much deeper than just seeing Jesus after He resurrected. This is about truly believing what we do not see.  Thomas learned from Jesus and saw His power just like the others, yet he did not believe Jesus was alive.  How many of us study the bible, go to church, shout “amen!” when the preacher says something powerful, yet live our lives unbelieving?  Do you live only believing the things you see or also the things you hear from God?  The great thing about this dilemma is that there is a solution.

In Mark 9, we read the story of a man asking for Jesus to help heal his son but Jesus points out the man’s unbelief in His abilities.  The man, recognizing his own weakness, asks Jesus for more faith:

23 And Jesus said to him, ” ‘If You can?’ All things are possible to him who believes.” 24 Immediately the boy’s father cried out and said, “I do believe; help my unbelief.”

Our belief and faith in God comes from Him.  He is the source of our belief.  He will give it to us if we…believe He can and will (read Matthew 21:22).  Jesus exposed this little faith conundrum with the man mentioned above.  When I was a kid, I had this little weird thought that always stuck with me, “if I were granted one wish, I would wish that all my other wishes come true.”  Some of us might wish for a million dollars, for one of our family members to be brought back to life, or just for a house to live in or a decent job.  Can you see how we limit the scope of which we would be offered by not contemplating the richness of what we have been offered?  If we have been granted some faith the size of a mustard seed, why do we use it on silly things instead of that which truly matters?  Why would we grind up that one mustard seed to make some mustard out of it and only get one use of it?  Instead, we can plant it so it grows and gives us many more mustard seeds for making a bunch of mustard and much more!  So too follows our faith.

In Matthew 25, we read the parable of the talents.  In the beginning, let us note that Jesus is talking about the Kingdom of Heaven.  This is how the Reign of God works.  Then he goes on to explain a man who gave three of his servants different amounts of talents to take care of while he was away.  Upon return, the man finds that two of the three invested what they had been given and therefore it grew and the man paid them accordingly.  The last, however, acted in fear and therefore did not invest his portion at all.  Not only did he not gain anything, but he also lost what he had originally been given because he failed to put it to use.  This also happens with our own faith.  I could spin off into a whole other lesson with this, but to maintain focus, let us recognize the importance of investing the faith we have been given, regardless of how much, so that it will grow.  Let us plant the mustard seed and trust in God for the rain and sun to produce more instead of hiding it away or using it for a one shot miracle.

We have gravely undercut and underinvested the faith God has given us and if we don’t put it to work, we will lose it.  We are put in situations to activate and use our faith, just as this lame man was given the opportunity to put his faith to action when Paul approached him.  Thomas had the opportunity to put his faith to use when his companions told him Jesus was alive.  What opportunities had God given you to exercise and invest the faith He has given you?