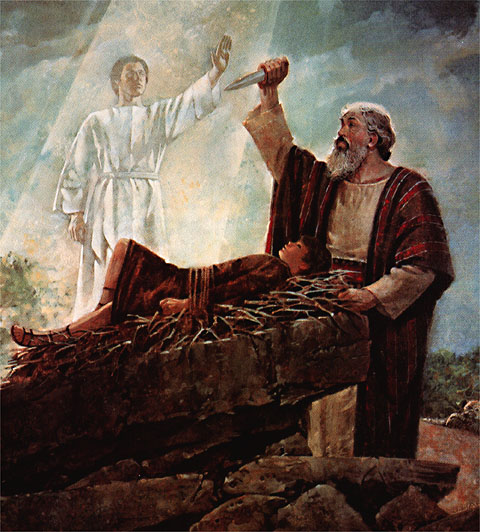 Hebrews 11:17-19
17 By faith Abraham, when he was tested, offered up Isaac, and he who had received the promises was offering up his only begotten son; 18 it was he to whom it was said, “In Isaac your descendants shall be called.” 19 He considered that God is able to raise people even from the dead, from which he also received him back as a type.

I always love reading about Abraham’s faithfulness in the story of being called to offer his son to God.  We see ultimate faith exemplified.  You can read the original story in Genesis 22.  There are so many elements of the story that always catch my attention: the obedience of Abraham and subsequent obedience of Isaac, Abraham answering his son’s questioning truthfully despite the difficult situation, and most interestingly, being able to see Abrahams growth in faith.  Before all this happened, Abraham had trouble believing he would have a son with his wife Sarah.  Then, he lied his way through his journey, not trusting in God’s protection.  God already told him he would be the father of many nations and he had yet to have a child, so why would God let something happen to them?  Yet on that mountain in Morah, Abraham faithfully raised a dagger to slay his only son in obedience to God.

The author recalls this entire story in a few short sentences and then drops this odd statement: from which he also received him back as a type.  I have heard this term mentioned before, but now that I am reading it in the bible, it seems a bit odd, doesn’t it?  It’s one of those things we’d rather just shrug off and move onto the next section.  This is part of the Jewish culture we must dig into, because it is important.  The original Greek for the word “type” is parabole (pronounced par-ab-ol-ay’) and it signifies a double meaning or parable.  It is a comparison usually in spiritual matters to mean that while we are experiencing a physical situation, there is a spiritual significance to it.

The parallel is to Christ.  The author has been using Jewish tradition and religion to explain the importance of Christ in accordance to Jewish custom and here he explains that the story of Isaac was a foreshadowing of events to come.  John Gill’s Exposition of the Bible is a commentary I consulted on this one and I’d like to share the comparison he draws out between Isaac and Christ to display the similarities:

in his (Isaac’s) birth, and the circumstances of it; he was long promised and expected, as Christ, was; his birth was beyond the ordinary course of nature, and attended with great joy; he was circumcised the eighth day; at his weaning a great feast was made, typical of the Gospel feast; and as he was persecuted by Ishmael, so was Christ by Herod, in his infancy: and he was a figure of him in his oblation; they were both sons of Abraham; both only begotten and beloved sons; both heirs; both carried the wood on which they were offered; both were offered on a Mount, and by their father, by whom neither of them were spared; and both by the command of God, and alone, none were with them: and Isaac prefigured him in his deliverance; Abraham stretched out his hand, but was restrained, and not a bone of Christ must be broken; not Isaac, but the ram was slain, not the divine, but the human nature suffered; both were delivered on the third day, the one as from death, the other really from death; and both returned to their father’s house. Moreover, Abraham received his son in the similitude of a resurrection; it was as life from the dead

Isaac and Jesus were both offered as perfect sacrifices and considered dead among men but also considered that they might have a chance because God is able to raise people from the dead.  The promise through Isaac was that God would create a nation from him.  Jesus claimed he was the Son of God and the salvation that Israel was waiting for.  Both faced certain death but by the providence of God overcame it.  It was Abraham’s (and subsequently Isaac’s) faith that delivered Isaac from death.  Likewise, Jesus followed His mission on earth with faith that God the Father would follow through on His promises.

The scary thing is that in order for us to realize and experience the fullness of God’s promises, we have to put ourselves in a position of vulnerability.  Just like any other relationship, if you want to grow in trust and faith in the other person, you have to make yourself vulnerable enough to where you could get hurt.  In our relationship with God, He calls us to put our entire lives in our hands.  Remember Romans 12?

Abraham presented Isaac as a holy and living sacrifice.  Isaac complied with his earthly father and his heavenly father and presented himself as this sacrifice.  Jesus also did the same out of obedience to The Father and trust in His providence.  Don’t you want this type of faith?  Wouldn’t you want to have the kind of trust in God that displays this kind of boldness and obedience?  It all starts by trusting God for what He says.