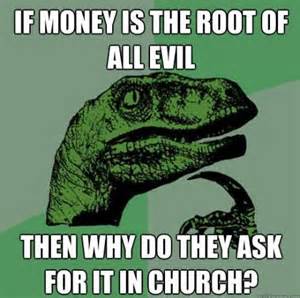 Paul now is transitioning to another topic: giving.  This tends to be a sore subject for some folks because they believe the church is just out to make money.  The tax-exempt status and the constant asking for funds is enough to make anyone wary.  Add the handful of preachers and leaders who have used religion to make money and you get a good number of people who are suspicious of giving money to churches or other nonprofit organizations.  Some may even go as far to say that the bible was written and assembled to trick people out of their money.  If you pay attention to what it says, however, it is quite the opposite.

8 Now, brethren, we wish to make known to you the grace of God which has been given in the churches of Macedonia, 2 that in a great ordeal of affliction their abundance of joy and their deep poverty overflowed in the wealth of their liberality. 3 For I testify that according to their ability, and beyond their ability, they gave of their own accord, 4 begging us with much urging for the favor of participation in the support of the saints, 5 and this, not as we had expected, but they first gave themselves to the Lord and to us by the will of God. 6 So we urged Titus that as he had previously made a beginning, so he would also complete in you this gracious work as well.

Paul mentions a handful of churches in Macedonia (most of which, if not all, he planted) that despite their lack of money, they still desired to contribute to the work Paul and others were doing.  Paul and his comrades didn’t even expect these churches to give because of their poverty, but let us pay attention to the end of verse 5.  They first gave themselves to the Lord and to us by the will of God.  You see, the giving wasn’t about looking for blessing, trying to get a tax write off, or even that they were convinced by men that it was the right thing to do.  Rather, it was because they were dedicated to their relationship with God, His Will, and being obedient to what He told them to do.  This is the gracious work that Paul desires Titus to complete in the Corinthians.  Not that they would give money even if they didn’t have it, but that they would earnestly desire the will of God and be obedient to what He says.

I urge us all to give in this way.  Don’t let someone talk you into it.  In the next chapter of 2 Corinthians, we will see a popular verse, “7 Each one must do just as he has purposed in his heart, not grudgingly or under compulsion, for God loves a cheerful giver.”  I really appreciate our pastor’s explanation that tithes and offerings are not about the money.  Think about it; if God created everything out of nothing, does He really need a few (insert denomination of choice) to make things happen?  It is about surrender and obedience.  In Matthew 6:24 we catch Jesus teaching about this very thing, “No one can serve two masters; for either he will hate the one and love the other, or he will be devoted to one and despise the other. You cannot serve God and wealth.”

He was very clear that His point was about deciding between worldly wealth and spiritual wealth.  They do not coincide.  Does this mean we must all take a vow of poverty?  Does this mean that every wealthy Christian is a fake?  No.  He isn’t talking about having wealth, He is talking about serving wealth.  Remember, IT’S NOT ABOUT THE MONEY. If your deep desire is to attain wealth, fame, and all the junk that comes with it, then yes, you are serving wealth; it is what drives you.  If on the other hand you are driven to invest, make money, and create business for the purpose of serving God through it, then you are serving Him, driven by His will and design for your life.  It is important for us to understand the difference.  How do we know if that is what God wants us to do?  First surrender to Him and His will and He will reveal it to you.  Then, when He tells you, do it.

Who are you serving today?

2 thoughts on “It’s Not About The Money”