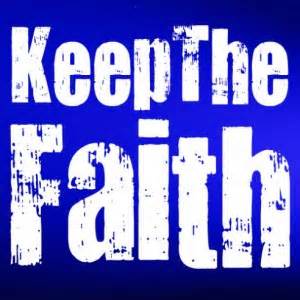 Starting with Moses, the author provides us with a laundry list of afflictions endured by those throughout Jewish history who kept their trust in God instead of their physical situation around them.

Hebrews 11:27-40
27 By faith he left Egypt, not fearing the wrath of the king; for he endured, as seeing Him who is unseen. 28 By faith he kept the Passover and the sprinkling of the blood, so that he who destroyed the firstborn would not touch them. 29 By faith they passed through the Red Sea as though they were passing through dry land; and the Egyptians, when they attempted it, were drowned. 30 By faith the walls of Jericho fell down after they had been encircled for seven days. 31 By faith Rahab the harlot did not perish along with those who were disobedient, after she had welcomed the spies in peace. 32 And what more shall I say? For time will fail me if I tell of Gideon, Barak, Samson, Jephthah, of David and Samuel and the prophets, 33 who by faith conquered kingdoms, performed acts of righteousness, obtained promises, shut the mouths of lions, 34 quenched the power of fire, escaped the edge of the sword, from weakness were made strong, became mighty in war, put foreign armies to flight. 35 Women received back their dead by resurrection; and others were tortured, not accepting their release, so that they might obtain a better resurrection; 36 and others experienced mockings and scourgings, yes, also chains and imprisonment. 37 They were stoned, they were sawn in two, they were tempted, they were put to death with the sword; they went about in sheepskins, in goatskins, being destitute, afflicted, ill-treated 38 (men of whom the world was not worthy), wandering in deserts and mountains and caves and holes in the ground.

39 And all these, having gained approval through their faith, did not receive what was promised, 40 because God had provided something better for us, so that apart from us they would not be made perfect.

These stories that the author highlights can be found throughout the Old Testament.  In fact, every player throughout the bible that at least falls into the lineage of Christ had worldly trials that gave him or her opportunities to rely on God instead of themselves or the world.  The funny thing is that we rely on the world so much and are continuously disappointed that we vow to never let someone hurt us or to never trust someone again.  Then we take that misplaced distrust and apply it to our relationship with God who really never did anything against us.  Some of us might think He did (allowing someone to die, not helping our marriage survive, “putting” us in a difficult situation) but usually there are more details to the situation that we refuse to hear.  We just want to be mad at someone so we pick on Him.

The apostles throughout the New Testament continuously discuss standing firm in the faith.  They talk about hardships and give glory to God for overcoming the world by staying strong in the faith.  Now that we are adopted into the lineage of Christ, we too get to endure similar afflictions.  Yes, I said, “we get to.”  This is a difficult concept to accept.  I’ve met a few people who have wholeheartedly accepted this principle of Christian life.  The apostle Paul gives glory to God for deliverance in his letter to the Corinthians by saying:

Our perseverance in faith (which God gives us strength for) glorifies Him because the world sees the joy and strength despite ridiculous odds and situations in our lives.  One of the guys I work with had his bike stolen recently.  He was telling me the story and he said, “When I realized what happened, I laughed because I knew it was a test.  It’s just a bike, nothing worth getting upset over.  God always provides what I need.”  These powerful words have continued to stick with me.  When we endure frustration, anger, and difficulty it is an opportunity to rely on God instead of letting the material things draw our attention away from Him.

This might seem like a lesson in, “just keep a good attitude despite your circumstances and everything will be alright.”  It’s more than that.  It’s about realizing the sovereignty of God, how much He loves you, and staying focused on Him instead of other things.  It’s not about pretending to be happy or have joy in difficulty; it is about staying connected to the source of all joy and happiness.  In happiness, you can’t “fake it till you make it.”  This just makes things worse because deep down you know that you’re just faking it.  But if we keep our eyes fixed on the prize (the previously mentioned upward calling of Christ), then we will have no choice but to exude joy and happiness.  We spend our entire lives trying to fill our hearts with things that make us happy but they are only temporary fixes to a permanent problem.  You need a real solution: Jesus Christ.  This doesn’t apply to nonbelievers, but believers alike because while we know and love and have a relationship with Jesus, we still let the things around us distract us.  Just like when Peter was walking on water and the waves around him distracted him.  He lost focus of Jesus and began to sink.

Are you sinking?  Have you lost focus?  Maybe you have never had the focus in the first place.  If you need more “proof” of God’s providence, flip through your bible and read the stories of the people referenced in this passage.  You will see that despite impossible circumstances, God made it possible not only to survive, but also to thrive with joy and giving Him the glory.  How are you being distracted today?  Stand firm and keep the faith.

1 thought on “Keep the Faith”