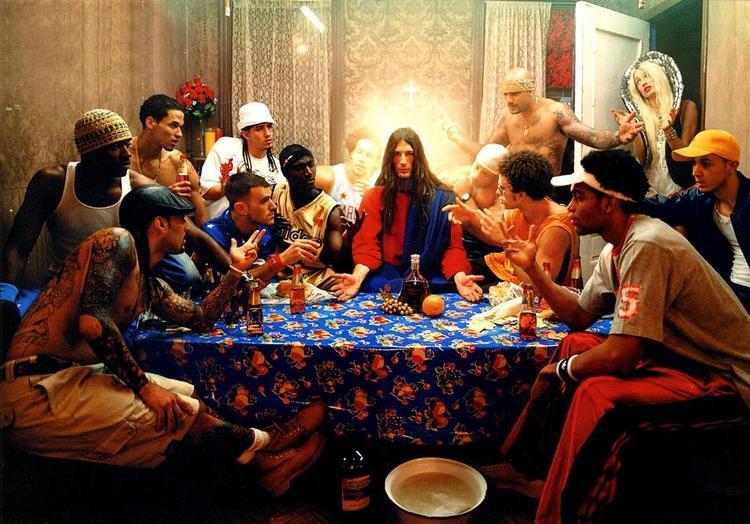 Mark 2:13-17
14 As He passed by, He saw Levi the son of Alphaeus sitting in the tax booth, and He said to him, “Follow Me!” And he got up and followed Him. 15 And it happened that He was reclining at the table in his house, and many tax collectors and sinners were dining with Jesus and His disciples; for there were many of them, and they were following Him. 16 When the scribes of the Pharisees saw that He was eating with the sinners and tax collectors, they said to His disciples, “Why is He eating and drinking with tax collectors and sinners?” 17 And hearing this, Jesus said to them, “It is not those who are healthy who need a physician, but those who are sick; I did not come to call the righteous, but sinners.”

Levi is also known as Matthew, who wrote the first account of the Gospel we find in the beginning of the New Testament and also one of His 12 chosen disciples.  It is always interesting to find out who these guys were that Jesus assembled to be His close followers.  Tax collectors, much like today, were at that time despised by society.  Even though they were mostly Jews, they were despised because not only were they working for the oppressive government, but they also were known for taking more money than they should have from the people.  The Roman tax collector was very much shunned from his people because of the implications of his job.  The fact that Jesus gave them attention and spent time with them completely dumbfounded the society’s religious folk.

Jesus led people by example.  He ministered to them not by sitting them down and lecturing to them about all the wrong things they did like the religious elite do to boost their ego, but by showing them through His own actions and attitude the Kingdom of God.  The scribes of the Pharisees would dine and congregate with people that revealed their supposed “holy” status, whereas Jesus was more concerned about the salvation of sinners than His own image.

How often do we turn away from the homeless, the drunk, the ill, the troubled soul, or anyone else simply because we don’t want to be seen associating with them?  How many people do we ignore on the streets who are yearning for salvation on our way to church on Sundays?  How often do we choose not to grow closer with someone who otherwise has nobody to talk to?  Those who are stuck in a life of sinfulness don’t need to be told how horrible of a person they are or shunned from society so they learn to be better people.  They need someone to love them unconditionally and give them hope for the future.  They need someone to recognize that they are human.  When we are in the depths of our human condition, there is no hope.  When there is no hope, there is no life.  The people Jesus was ministering to were the walking dead: dead to sin, dead to the life God designed them for, and dead to society.

Jesus’ comparison of His care for sinners to that of a doctor really puts into perspective the hypocrisy of religion.  This is why Jesus’ brother, James, clearly defined religion in 1:27

[quote]Pure and undefiled religion in the sight of our God and Father is this: to visit orphans and widows in their distress, and to keep oneself unstained by the world.[/quote]

It isn’t about being presentable, looking good, or appearing righteous by following a bunch of rules.  We have completely distorted Jesus’ call to be cleansed from our sinfulness and live in the freedom He has prepared for us.  If we want to be pious and religious, then we do it by taking care of the abandoned and hopeless regardless of what the world says we should do.  Jesus wasn’t trying to impress the Pharisees, nor was He trying to “get in” with them because He knew they had all the knowledge they needed of scripture.  What they needed was to learn how to apply it the way it was designed to be applied.  Often times I read the stories of Jesus and think that He ignored the Pharisees, but in His wisdom He taught both the Pharisees and those rejected by society at the same time.  He showed the “sinners” they had value and there was redemption while showing the Pharisees the heart of the Law they were so focused on following.  Isn’t it interesting that despite all the rules the Pharisees set out to follow they conveniently neglected to remember the ones about forgiving your neighbor, caring for the sick and needy, and loving God by loving others?

The song below always pierces my heart because I wonder how many people I am actually withholding from the Kingdom of God because of my own insolence and desire to be seen as righteous but acting contrary to God’s command of loving others unconditionally.  How are you following Jesus’ example?