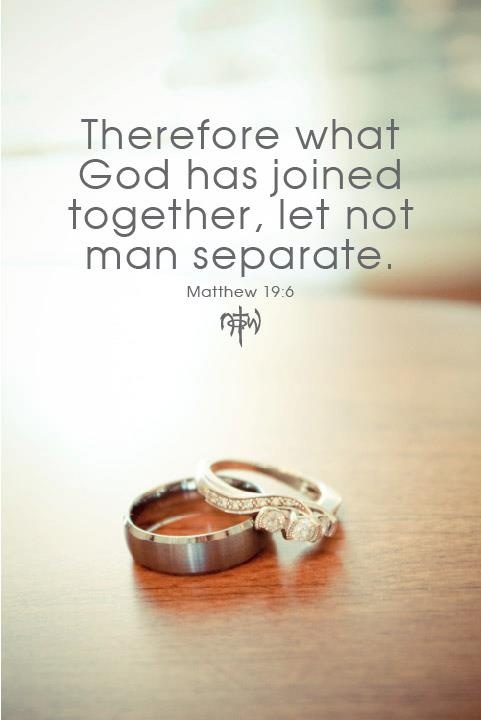 Matthew 19:3-12
3 Some Pharisees came to Jesus, testing Him and asking, “Is it lawful for a man to divorce his wife for any reason at all?” 4 And He answered and said, “Have you not read that He who created them from the beginning MADE THEM MALE AND FEMALE, 5 and said, ‘FOR THIS REASON A MAN SHALL LEAVE HIS FATHER AND MOTHER AND BE JOINED TO HIS WIFE, AND THE TWO SHALL BECOME ONE FLESH ‘? 6 “So they are no longer two, but one flesh. What therefore God has joined together, let no man separate.” 7 They said to Him, “Why then did Moses command to GIVE HER A CERTIFICATE OF DIVORCE AND SEND her AWAY?” 8 He said to them, “Because of your hardness of heart Moses permitted you to divorce your wives; but from the beginning it has not been this way. 9 “And I say to you, whoever divorces his wife, except for immorality, and marries another woman commits adultery.” 10 The disciples said to Him, “If the relationship of the man with his wife is like this, it is better not to marry.” 11 But He said to them, “Not all men can accept this statement, but only those to whom it has been given. 12 “For there are eunuchs who were born that way from their mother’s womb; and there are eunuchs who were made eunuchs by men; and there are also eunuchs who made themselves eunuchs for the sake of the kingdom of heaven. He who is able to accept this, let him accept it.”

There have been a few times now that I have written about Christian marriage and divorce in my studies of the scriptures:

All lessons end the same way: divorce is sinful.  Here we see the religious elite trying to catch Jesus in a trick, because they know that divorce is sinful yet it is allowable by Jewish Law.  It is interesting to note that even to this day, the Christian realm bends to what the law of the land says and society tells us is ok instead of what God says.  As the Pharisees continued questioning Jesus, He tells it like it is: we are hard of heart.  We don’t want to follow God’s will or design, we want to do it our own way.

I used to think that Jesus’ statement in verse 9 gives us an exception out of the sin of divorce.  On the contrary, as we saw in “Excuses for Divorce,” Jesus is simply saying that our marrying of another because our previous spouse left us for someone else is not considered adultery.  He is not saying, “if your spouse cheats on you, dump them and go find someone else.”  He is saying, “If your spouse leaves you for someone else, it’s ok to remarry.”

In this passage Jesus takes the idea of marriage to a different level.  The disciples commented that if marriage is so much trouble, then it’s not worth it to marry at all.  They were still thinking in a worldly way.  How many times have we sworn off relationships because of a bad experience?  Breakups hurt, especially marriages, because it is literally the tearing apart of one flesh into two.  If you have ever torn off a piece of your own flesh, you know that it is excruciatingly painful; so is divorce!

Jesus responds to the disciples’ jaded comment to reveal that only a select few should never be married and if it is the case, clearly it is by God’s design.  The Apostle Paul wrote in 1 Corinthians 7 in response to some questions the church had in regards to marriage and divorce:

5 Stop depriving one another, except by agreement for a time, so that you may devote yourselves to prayer, and come together again so that Satan will not tempt you because of your lack of self-control. 6 But this I say by way of concession, not of command. 7 Yet I wish that all men were even as I myself am. However, each man has his own gift from God, one in this manner, and another in that. 8 But I say to the unmarried and to widows that it is good for them if they remain even as I. 9 But if they do not have self-control, let them marry; for it is better to marry than to burn with passion. 10 But to the married I give instructions, not I, but the Lord, that the wife should not leave her husband 11 (but if she does leave, she must remain unmarried, or else be reconciled to her husband), and that the husband should not divorce his wife.

God designed us to live together and with a spouse.  We see in some denominations the horrible ramifications of denying marriage to church leaders as they begin to fall into issues involving lust and fornication.  That isn’t to say that married folk don’t have similar struggles, but that the singles are easier targets for the enemy.  Satan knows this and works hard to draw us away when we “burn with passion” as Paul puts it so that we become a detriment to the church instead of an encouragement.  This is why Jesus warns strongly about being a eunuch (single and celibate person).

Let us no longer allow society to dictate how we view marriage as Christians.  The bible is very clear on how we should handle these situations and should not try to twist scripture so it fits our emotions and desires but instead be conformed by the transformation of our minds into God’s design and will for marriage.