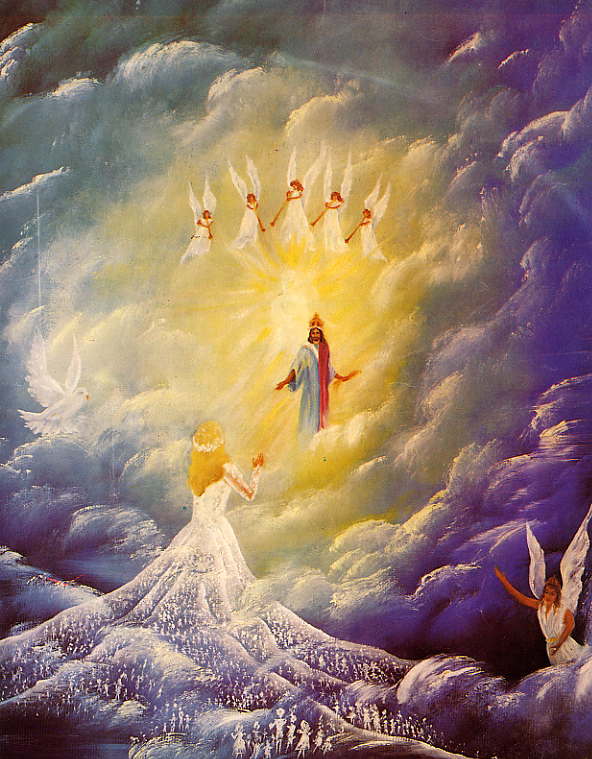 Matthew 22:23-33
23 On that day some Sadducees (who say there is no resurrection ) came to Jesus and questioned Him, 24 asking, “Teacher, Moses said, ‘IF A MAN DIES HAVING NO CHILDREN, HIS BROTHER AS NEXT OF KIN SHALL MARRY HIS WIFE, AND RAISE UP CHILDREN FOR HIS BROTHER.’ 25 “Now there were seven brothers with us; and the first married and died, and having no children left his wife to his brother; 26 so also the second, and the third, down to the seventh. 27 “Last of all, the woman died. 28 “In the resurrection, therefore, whose wife of the seven will she be? For they all had married her.” 29 But Jesus answered and said to them, “You are mistaken, not understanding the Scriptures nor the power of God. 30 “For in the resurrection they neither marry nor are given in marriage, but are like angels in heaven. 31 “But regarding the resurrection of the dead, have you not read what was spoken to you by God: 32 ‘I AM THE GOD OF ABRAHAM, AND THE GOD OF ISAAC, AND THE GOD OF JACOB ‘? He is not the God of the dead but of the living.” 33 When the crowds heard this, they were astonished at His teaching.

Before we get into the meat of this passage, I want to clear something up.  I finally found a verse that might possibly hint that we convert to angels when we die.  However, if we pay attention to the conversation, we learn that Jesus’ reference to us becoming “like angels” isn’t referring to our purpose nor our physical form, but our relationship to one another and God.  The conversation here is about marriage in heaven, so let us not construe that one statement in the middle to mean that when we die we get wings and a harp and sit on a cloud.  Ok?

One of the religious sects began questioning Jesus about marriage in heaven.  This is a reasonable conversation and I don’t even think that the Sadducees might have been trying to trick Him (but they very well could have been).  This is a question that some of us might ask if given the opportunity to ask it.  In verse 24 we see them referencing a Jewish concept that was prescribed in Deuteronomy 25:

5 “When brothers live together and one of them dies and has no son, the wife of the deceased shall not be married outside the family to a strange man. Her husband’s brother shall go in to her and take her to himself as wife and perform the duty of a husband’s brother to her. 6 “It shall be that the firstborn whom she bears shall assume the name of his dead brother, so that his name will not be blotted out from Israel. 7 “But if the man does not desire to take his brother’s wife, then his brother’s wife shall go up to the gate to the elders and say, ‘My husband’s brother refuses to establish a name for his brother in Israel; he is not willing to perform the duty of a husband’s brother to me.’ 8 “Then the elders of his city shall summon him and speak to him. And if he persists and says, ‘I do not desire to take her,’ 9 then his brother’s wife shall come to him in the sight of the elders, and pull his sandal off his foot and spit in his face; and she shall declare, ‘Thus it is done to the man who does not build up his brother’s house.’ 10 “In Israel his name shall be called, ‘The house of him whose sandal is removed.’

This idea was created to keep a man’s inheritance within the family and to make sure the widow and orphans are taken care of.  We can see the importance in this by reading the shame involved in rejecting to accept the duty.  They created a hypothetical situation in order to see his mastery of the scriptures and how He might sidestep the issue, since a woman can only have one husband.  However, their worldly focused thinking distracted them from the fact that in heaven, we as the bride of Christ are married to Him!

Matthew makes sure to note to his readers that the Sadducees were the Jewish sect that did not believe in resurrection before the part where Jesus turns the conversation on its head.  He points out that the more important thing to remember is not what to do when people die, but to remember that we are alive in Christ!  As residents of earth, we who believe in Jesus as the Savior are His betrothed and in the last days, we will be completely united with Him.  Think about what is foretold in Revelation 19:

7 “Let us rejoice and be glad and give the glory to Him, for the marriage of the Lamb has come and His bride has made herself ready.” 8 It was given to her to clothe herself in fine linen, bright and clean; for the fine linen is the righteous acts of the saints. 9 Then he said to me, “Write, ‘Blessed are those who are invited to the marriage supper of the Lamb.’ ” And he said to me, “These are true words of God.”

We get to be married to God!  We are His one true love.  We are the ones who He sacrificed Himself for and who loves us without condition or end.  We are blessed beyond measure because we are those who are promised to the King.