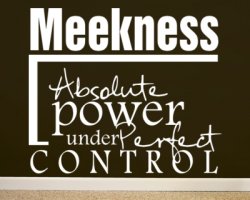 Matthew 5:5
5 “Blessed are the gentle, for they shall inherit the earth.

This verse is more commonly known to use the word “meek” instead of “gentle”. I have heard meekness defined as “power under control.” Jesus was the most excellent example of meekness. He wielded the power of God and He wielded it well. He used it for glorifying God, not Himself. He used it for serving and loving others, not growing in status. I love what Paul writes in Philippians 2 about how we should emulate Christ in humility and avoiding what he calls “empty conceit”:

5 Have this attitude in yourselves which was also in Christ Jesus, 6 who, although He existed in the form of God, did not regard equality with God a thing to be grasped, 7 but emptied Himself, taking the form of a bond-servant, and being made in the likeness of men. 8 Being found in appearance as a man, He humbled Himself by becoming obedient to the point of death, even death on a cross. 9 For this reason also, God highly exalted Him, and bestowed on Him the name which is above every name, 10 so that at the name of Jesus EVERY KNEE WILL BOW, of those who are in heaven and on earth and under the earth, 11 and that every tongue will confess that Jesus Christ is Lord, to the glory of God the Father. 12 So then, my beloved, just as you have always obeyed, not as in my presence only, but now much more in my absence, work out your salvation with fear and trembling; 13 for it is God who is at work in you, both to will and to work for His good pleasure.

We see that because of Jesus’ ultimate humility and meekness that He has earned the glory and worship of everyone on earth. In our humility, we will do the same: inherit the earth. It is humility that brings us into a place where we can gracefully walk in the presence of God and in doing so, we regain dominion over the earth. The tricky thing about humility, though, is that once you think you have it, you lose it. Humility is the opposite of pride. Pride came before the fall and as a result Adam, Eve, and the rest of us lost what was given to us: earth. We might still be living in it but we lost control of it. This might seem like a bit of a foreign concept to us because until recently, I never thought about humans having or losing dominion over this realm. But, it is what God gave us when He created us. It’s why Adam named all the animals, it’s why there were no bee stings or snake bites. It’s why lions and lambs lived harmoniously in the Garden of Eden. We decide, however, that we want to “be like God,” so we surrender our freedom and peace for power and control and in that instant we lose it all.

There is another interesting display of Jesus’ power under control from John’s account of when He was arrested. In John 18, we see Judas approach Jesus and reveal Him to the Roman cohort (about 500-1,000 soldiers) and officers from the chief priests and Pharisees:

Simply with His voice, Jesus knocked down an entire company of men, but still walked away with them to be tried, tortured, and crucified. If you had the power to destroy all these men that you knew were going to take you away to your death, what would you have done? Peter did what he could and cut off someone’s ear, but Jesus restored it and admonished Peter for being so rash. We often think that meekness is weakness when in fact meekness is more powerful than the power itself. Imagine the self-control and discipline it takes for someone who is strong to wield that power with grace and mercy. Is it a challenge you are up for? The only way we can accomplish it is by humbling ourselves despite our ability to overpower others in our area of giftedness. When we do, we will be able to inherit the earth once again.