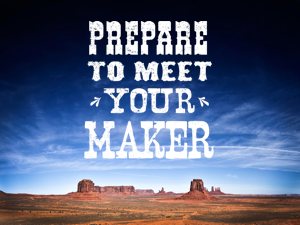 Acts 20:22-27
22 “And now, behold, bound by the Spirit, I am on my way to Jerusalem, not knowing what will happen to me there, 23 except that the Holy Spirit solemnly testifies to me in every city, saying that bonds and afflictions await me. 24 “But I do not consider my life of any account as dear to myself, so that I may finish my course and the ministry which I received from the Lord Jesus, to testify solemnly of the gospel of the grace of God. 25 “And now, behold, I know that all of you, among whom I went about preaching the kingdom, will no longer see my face. 26 “Therefore, I testify to you this day that I am innocent of the blood of all men. 27 “For I did not shrink from declaring to you the whole purpose of God.

What would you do or say if someone told you, “Go into this city.  They will capture you and eventually you will be killed.”  Paul accepted it with obedience.  One of Paul’s famous quotes is, “for me, to live is Christ and to die is gain (Philippians 1:21).”  He welcomed death because in accepting the complete sovereignty of God in his life, he knew 1) that it was part of God’s plan for him and 2) that he would soon meet his creator!

Many times we talk about “meeting your maker” and I don’t think I have ever heard it in a positive context.  We always look at death as a negative thing.  Yet when our death is sealed with the blood of Christ, we should welcome it!  Paul was an example of this.  He was also an example of spiritual obedience.  Throughout the scriptures we read of Paul and his obedience to God, Jesus, and the Holy Spirit.  Since his conversion he was set on first seeking the guidance of God through His Spirit about what to do next.  Who he spoke to, which city he went to, how he went there, and even how and when he is going to die.  Are we this obedient to God?

Paul brings up this awkward topic about being innocent of the blood of all men.  As supposed Christians, we MUST pay attention to this.  As believers and followers of Christ, we are called to preach the gospel.  The great commission wasn’t a suggestion nor was it restricted to just a few.  Those who call themselves Jesus’ disciples are called to share His good news to the world.  Paul’s assertion in verse 26 is saying that he knows he did the best he could in not just telling the truth of God to as many as he came in contact with, but also that he told the whole truth.  Are you innocent of the blood of all men?  Let us not shrink from declaring the whole purpose of God!  As a side note, this is yet again another example that conversion is not up to us, but God.  Paul’s innocence was dependent upon him preaching the Gospel, not everyone believing it.

Going back to the impending death of Paul, did you notice that in verse 24 he includes his future incarceration and probable death as a part of his ministry?  Would we look at something like that as an opportunity or inconvenience?  Yet Paul knows that God’s providence and ultimate plan includes his own death.  Paul had been locked up many times before this and he knows he took good advantage of teaching the gospel to others while in prison.  Think of this: what kind of testament is it that one would die for his own beliefs?  In his time, Christians would be given the opportunity to escape death by renouncing their faith in Jesus Christ.  Maybe you have heard about this before, maybe you haven’t.  Let me ask you this: are you willing to die for what you believe?  Don’t answer with a simple, “of course I would,” because that is the expected “valiant” answer.  Instead, think about it and answer yourself honestly.  We look at radical Muslims who we think are crazy for blowing themselves up but guess what, at least they are willing to die for what they believe in.  Are you?  Paul was “crazy” too, but he had the hope and confidence of Jesus Christ and the trust that His will and plan are far superior than our own.  Paul accepted the sovereignty of God.  He also knew that once we dies, we are held accountable for his actions here on earth (hence his declaration in verse 26-27).

We should be excited to meet our maker!  We get to begin our relationship with Him here but get to spend eternity in His presence.  Is this crazy?  According to worldly thinking it is.  In Philippians 1, Paul goes into detail about this.  In understanding and accepting God’s sovereignty, we will yearn for the day we get to be face to face with Him, not fear it.  Do you fear this day?  If so, it is an indication that you know somewhere deep inside you that there is something missing, that you aren’t being as obedient as you should be.  The Holy Spirit can help with this.  We see that Paul’s complete obedience to the Spirit caused him to be ready for the ultimate test of obedience.  He walked into Jerusalem with joy!  Will you walk to your impending death with joy?  Think about it as you listen to this song…