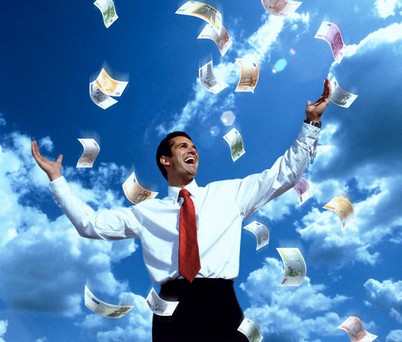 8 If you see oppression of the poor and denial of justice and righteousness in the province, do not be shocked at the sight; for one official watches over another official, and there are higher officials over them. 9 After all, a king who cultivates the field is an advantage to the land. 10 He who loves money will not be satisfied with money, nor he who loves abundance with its income. This too is vanity.11 When good things increase, those who consume them increase. So what is the advantage to their owners except to look on? 12 The sleep of the working man is pleasant, whether he eats little or much; but the full stomach of the rich man does not allow him to sleep. 13 There is a grievous evil which I have seen under the sun: riches being hoarded by their owner to his hurt. 14 When those riches were lost through a bad investment and he had fathered a son, then there was nothing to support him. 15 As he had come naked from his mother’s womb, so will he return as he came. He will take nothing from the fruit of his labor that he can carry in his hand. 16 This also is a grievous evil—exactly as a man is born, thus will he die. So what is the advantage to him who toils for the wind? 17 Throughout his life he also eats in darkness with great vexation, sickness and anger.

I highlighted verse 13 today (something I haven’t done in a long time) because it seems to be the point of this passage.  It makes me think of the difference between Japanese production efficiency and how the U.S. manufactures, stores, and sells their products.  I learned a few years ago that in Japan, they have no storehouses.  The Japanese are renowned for their production efficiency and every product that comes off the line already has a purchaser lined up so there is never any excess or storage concerns.  I worked for a number of years in a factory where we stockpiled parts and after they were all assembled we stockpiled hundreds of finished products waiting to be sold and distributed.  Even though they are all supposedly contracted, the plant was “fat” with finished product, slowly aging as they waited to be used.  In fact, we had to start a process of periodically retesting the products because after sitting for a while, they started malfunctioning and the customer was receiving bad products.  Plant managers from all over the world travel to Japan to learn more about production efficiency and hope to glean some knowledge about how to make a more “lean” production line.

Solomon is telling us today about the inefficiency yet commonality of storing up goods on earth.  James, the brother of Jesus, warns us against worrying about our riches on earth, 5 Come now, you rich, weep and howl for your miseries which are coming upon you. 2 Your riches have rotted and your garments have become moth-eaten. 3 Your gold and your silver have rusted; and their rust will be a witness against you and will consume your flesh like fire. It is in the last days that you have stored up your treasure! 4 Behold, the pay of the laborers who mowed your fields, and which has been withheld by you, cries out against you; and the outcry of those who did the harvesting has reached the ears of the Lord of Sabaoth. 5 You have lived luxuriously on the earth and led a life of wanton pleasure; you have fattened your hearts in a day of slaughter.   Just as Solomon is telling us in Ecclesiastes, James is saying in his letter: Don’t be surprised about the greediness and worriedness of the world, but don’t fall into it either lest you have the same fate as they do.  It amazes me whenever I see the difference between American culture and Guatemalan culture.  We store up as much as possible but the Guatemalans live day by day.  Their extra is shared with community and family so that nobody goes without; but our American mentality of individualism and getting an edge above everyone else causes us to hoard with little to no gain.  The part that kills me is that we don’t just hoard material possessions, but we hoard our time, love, and energy as well.  We don’t want to “waste” it on anyone who is “undeserving.”  Yet, these are the people Jesus tells us to share it with the most!

What is the big deal of hoarding riches?  They become our God.  What is the big deal about not working for what we have?  We become gluttonous and lazy.  What is the big deal about not sharing with others?  We neglect the love of Christ in our own lives.  I’ve talked a lot lately about our Godly purpose: why we are here.  It isn’t to die with the most possessions or have the best-looking body so we can be lusted after (it’s not going to be attractive 6 feet under the ground anyway).  Rather, our Godly purpose is to live in communion with God.  These things aren’t said to us so we can live in poverty and suffering.  Rather they are to prevent us from being weighed down with this world.  God created us to live free and in His love.  Yet we run off and make our own Gods (even if it is ourselves) living completely outside of the design by which we were created, then we can’t understand why we aren’t happy.  I love how Solomon said that a hard worker sleeps better at night than one who is stuffed to the gills of his own splendor.  How many times have you tried to go to sleep after eating too much food?  It’s miserable, isn’t it?  Then you have the nightmare caused by your body trying to digest food during your sleep.  You might even wake up miserable the next morning because you abused your body with gluttony (I’m not pointing fingers here, I’ve done it too!).

Instead, Jesus calls us to live in faith.  He wants us to trust God and truly experience how much He loves and cares for us.  Once we experience and know it, then He calls us to share it with others.  We are called to witness and love others as a response to what He has done and continues to do for us.  He calls us to give people just a taste of the wonderfulness of God.  Jesus calls us to give away what we don’t truly need not because He wants us to sacrifice, but because excess just holds us down and pulls us away from the Father.  He tells us to rid ourselves of these things because we don’t truly need them, even though we think we do.

Luke 12 29 And do not seek what you will eat and what you will drink, and do not keep worrying. 30 For all these things the nations of the world eagerly seek; but your Father knows that you need these things. 31 But seek His kingdom, and these things will be added to you. 32 Do not be afraid, little flock, for your Father has chosen gladly to give you the kingdom. 33 “Sell your possessions and give to charity; make yourselves money belts which do not wear out, an unfailing treasure in heaven, where no thief comes near nor moth destroys. 34 For where your treasure is, there your heart will be also.