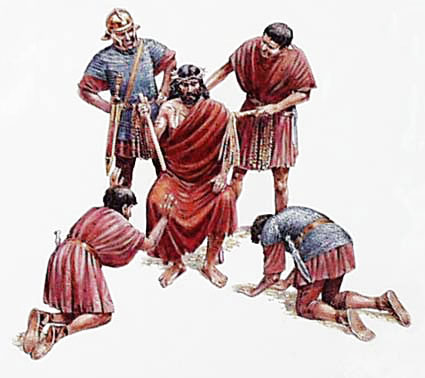 Matthew 27:27-31
27 Then the soldiers of the governor took Jesus into the Praetorium and gathered the whole Roman cohort around Him. 28 They stripped Him and put a scarlet robe on Him. 29 And after twisting together a crown of thorns, they put it on His head, and a reed in His right hand; and they knelt down before Him and mocked Him, saying, “Hail, King of the Jews!” 30 They spat on Him, and took the reed and began to beat Him on the head. 31 After they had mocked Him, they took the scarlet robe off Him and put His own garments back on Him, and led Him away to crucify Him.

For those of you who have been Christians for a while, how many times have you witnessed Jesus mocked?  It happens in TV shows, movies, maybe even books, and people tell off-color jokes about Him all the time.  How often have we gotten defensive about it and have tried to “defend” Jesus?  As for me, I tend to have a thick skin so I don’t pay attention to most instances like this, but that isn’t to say folks who are more sensitive to it are wrong for feeling the way they do.  However, we can see here Jesus’ reaction to being mocked.  As we saw before, Jesus only stood in speaking the truth, not trying to dispel untruths.  This same Roman cohort (300-600 Roman soldiers) that fell back onto their knees in the garden the night before was now abusing and mocking Him.  Yet He said nothing because He knew the truth despite their angst and animosity towards Him.  Our human sense of justice once again would kick in (and does even to this day) to defend this innocent man who is being mistreated.  Yet Jesus knew it didn’t matter what they did to Him because He was in the will of God.  God’s will is the safest place to be, despite what we are experiencing around us. 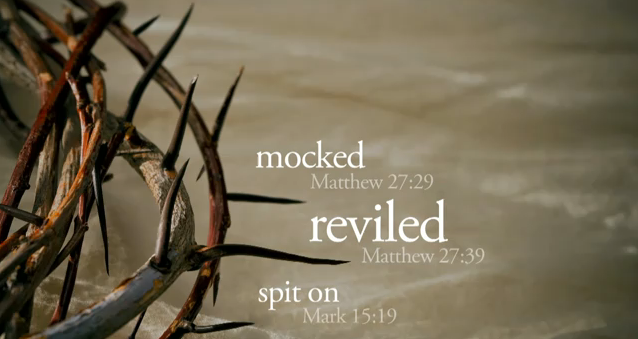 Jesus prayed hard about what was going to happen to Him because He knew it would not be pleasurable (in the flesh) but He knew that He wanted to be in the Father’s will more than anything else.  So, He endured all this because He knew that despite His persecution, His victory wasn’t in how He felt in His body, but the peace in His Spirit.  Jesus knew that He could do nothing to convince the soldiers to stop doing what they were doing to Him.  He also knew that God had a purpose for what He was going through.  So let’s think about how people persecute Jesus today.  If someone makes a skewed biblical reference on your favorite TV show or a coworker makes a joke about Jesus, how will you respond?  If Jesus would have asked the soldier to stop, do you think they would have?  Would it have made the situation better or worse?  Would they have been saved if Jesus decided to tell them they were wrong in what they were doing?  In this world, folks who are inclined to behave in this manner will not be changed by an intelligent quip from a believer or a truthful quote from the bible.

Jesus stayed silent in the truth, knowing that in His Truth He would be free.  To fast forward a little bit, verse 54 shows how God reveals His truth to those who need it at the appropriate time:

54 Now the centurion, and those who were with him keeping guard over Jesus, when they saw the earthquake and the things that were happening, became very frightened and said, “Truly this was the Son of God!”

So how then do we respond to such things?  Obviously if we are offended and have a way to avoid the person, TV show, etc. we can take action to stay away from it.  But in the moment where we are confronted with someone offending your faith, remember that God doesn’t need us to defend Him.  Instead of adding fuel to the fire by responding in kind, we should use it as an opportunity to refocus on God and ask Him how He would have us respond.  Is it in silence?  Is it in how we display love for them?  Is it in earnest prayer for them because they, “know not what they do”?  If we respond to the flesh in the flesh, all we are doing is contributing to the battle amongst men (as Peter did in the garden trying to defend Jesus).  Rather let us remain connected with God and grounded in His truth knowing that despite what the world throws at us, we are free in Him.