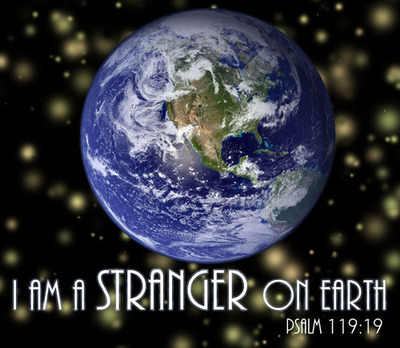 The author qualifies, based on the patriarchs of faith he just mentioned, what he meant in the first couple verses of this chapter.

Hebrews 11:12-16
12 Therefore there was born even of one man, and him as good as dead at that, as many descendants as the stars of heaven in number, and innumerable as the sand which is by the seashore. 13 All these died in faith, without receiving the promises, but having seen them and having welcomed them from a distance, and having confessed that they were strangers and exiles on the earth. 14 For those who say such things make it clear that they are seeking a country of their own. 15 And indeed if they had been thinking of that country from which they went out, they would have had opportunity to return. 16 But as it is, they desire a better country, that is, a heavenly one. Therefore God is not ashamed to be called their God; for He has prepared a city for them.

In the book of John, we see Jesus say something similar that is often repeated to remind us that we are born again:

Later, in John 18, when Jesus is on trial before Pontious Pilate, He states:

Abel, Enoch, Noah, Abraham, and Sarah were all living in the Kingdom of God.  They saw things that were of the spiritual realm, not the physical.  Those who enter God’s Kingdom do so through faith.  Those who are of the truth see and experience the spiritual realm and hear Jesus’ voice.  Those who ignore or refuse to seek the truth never will. For some of you, this is a hard pill to swallow.  Your custom and tradition and religion (or supposed lack thereof) will cause you to say, “I know the truth.” But, you are not set free.  You might think you are free because you don’t subscribe to a certain religious affiliation but even that is of this world. What we are reading about here is something not of this world.  If your assumptions and beliefs are solely based on the physical world around you and not the spiritual, then you are missing out!

The promises of God work differently than the promises of men.  Here we are reading that the promises spoken to these folks were not realized in their lifetimes.  They didn’t have to be.  They understood that God’s promises would come to pass even if they weren’t there to see them.  It isn’t about them or us; it is about God and His timing and His plan.  What matters on our side is that we get to be a part of it.  Through our relationship with God, He invites us in to be a small part of what He is doing here on earth.  Certainly, there are parts of the plan that each of these experienced.  Noah got to see the flood, Abraham and Sarah got to see their child born, Enoch got to experience rapture, and Abel go t to experience the glory of honoring God with his labor.

We need to understand that our lives here on earth are not about us and our faith extends far beyond what we see happening in front of us.  In Matthew 6, during Jesus’ sermon on the mount He tells us:

The folks mentioned in Hebrews 11 were seeking His Kingdom and His Righteousness first.  It is through faith in God and living in the Kingdom of God that we get to surpass the worries of this world.  If we stay focused on God’s kingdom instead of building our own, we will experience a much better life.  Certainly, it will seem strange to those around us who do not see, hear, or believe.  But our lives will be so much easier and we will continually grown in our relationship with God.

Here is a song about the hope we have through faith in God about the future.