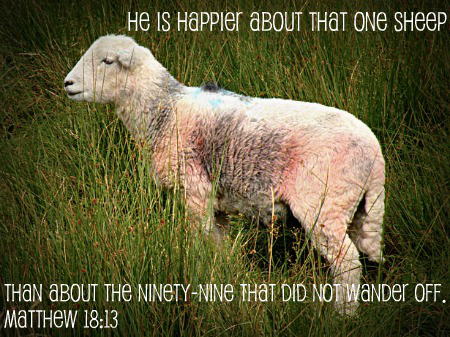 Matthew 18:11-14
11 [“For the Son of Man has come to save that which was lost.] 12 “What do you think? If any man has a hundred sheep, and one of them has gone astray, does he not leave the ninety-nine on the mountains and go and search for the one that is straying? 13 “If it turns out that he finds it, truly I say to you, he rejoices over it more than over the ninety-nine which have not gone astray. 14 “So it is not the will of your Father who is in heaven that one of these little ones perish.

As Jesus finishes His explanation of the Father’s love for His children, we read this popular passage about the shepherd leaving the 99 and going after the 1 lost sheep.  In the coming passages we are going to see the difference between going after the lost to save them and wasting your time.  But before we get there, let’s make sure we understand the implications of what Jesus is explaining with the sheep.

1) Understand that this refers to those who are already of the Kingdom.

Sometimes this passage gets twisted to talk about going after and chasing down those who are not yet saved.  While it is not to say that He doesn’t want all to be saved or that He doesn’t want us to evangelize those who have not yet heard the gospel, let’s not use this passage as one of saving those who never knew God.  This is explaining that God does not want any of us who are saved to stray or fall away from the faith.  If we are a part of the flock, He will make sure that we stay a part of the flock.  Of course, He will not force us, as we will see in the rest of chapter 18.

2) When we stray we perish.

Notice the wording of verse 14.  If we stray and are not found again, we can spiritually die.  That’s a scary thought, especially to those of us who are saved already and know better.  We have experienced the presence of God in our lives and know the wonder of being saved for eternity.  Yet if we stray and turn our backs on God, that is our choice He has given us.  Pay attention to what the Apostle Paul wrote in 1 Timothy 4:

1 But the Spirit explicitly says that in later times some will fall away from the faith, paying attention to deceitful spirits and doctrines of demons, 2 by means of the hypocrisy of liars seared in their own conscience as with a branding iron, 3 men who forbid marriage and advocate abstaining from foods which God has created to be gratefully shared in by those who believe and know the truth.

3) God is always on your side.

Can you imagine a shepherd leaving 99 sheep to wander on their own for a while during his search to find one missing sheep?  When we look at it from a numbers perspective, we would say that 99% is better than 1%.  But God the Father is an all or nothing God.  He will leave the 99 for you when you are lost.  That’s how important you are to Him!  He knows what will happen to you so He does His part in rescuing you from your sinfulness, but you must do your part and return to the flock with Him.

As we continue reading this chapter, Jesus is going to teach us how to go after that 1 sheep that has strayed so they do not perish.  Ask yourself today: are you the one lost sheep?