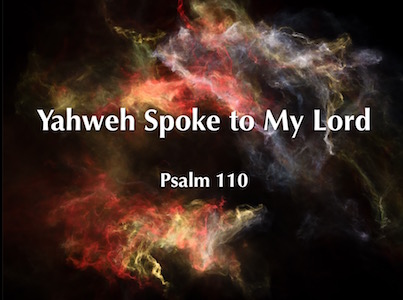 Psalm 110 is the most quoted psalm in all the New Testament.  That is because this psalm is a prophetic vision of Jesus as the Christ through David many centuries before Christ came to be born a human on earth.  It is referred to in all the gospel texts as Jesus challenges the Pharisees on their knowledge of the messianic prophecies in their scriptures.  He silences them with the reference because they know if they reject what He says, they will be judged for not believing the scriptures.  If they accept the text for what it says, however, they must recognize Him as the Christ.  Here it is in Matthew’s account in chapter 22:

41 Now while the Pharisees were gathered together, Jesus asked them a question: 42 “What do you think about the Christ, whose son is He?” They said to Him, “The son of David.” 43 He said to them, “Then how does David in the Spirit call Him ‘Lord,’ saying, 44 ‘THE LORD SAID TO MY LORD, “SIT AT MY RIGHT HAND, UNTIL I PUT YOUR ENEMIES BENEATH YOUR FEET “‘? 45 “If David then calls Him ‘Lord,’ how is He his son?” 46 No one was able to answer Him a word, nor did anyone dare from that day on to ask Him another question.

In Psalm 110 (also seen as verse 44 in the Matthew text referenced), the English language hides some things from us and depending upon your personal translation you use, you might see a difference between the capitalization between the first and second use of the word “lord”.  The first is all caps, which represents the use of the work JHVH or Jehovah or Yahweh referencing the Almighty Father God.  The second “lord” is translated from Adonai which refers to and is better translated as “lord” which refers to the Messiah/Christ.  In other words, David saw a vision of God the Father instructing Jesus the Messiah.  Why is this differentiation important and what does it have to do with recognizing Jesus as Messiah in how it shut the mouths of the Pharisees to never question Him again?

Notice how David, in writing what he saw, says, “the LORD said to my Lord…”  David was king at this point in time.  Nobody ranked higher than him in the kingdom of Israel.  He recognized Jesus as Lord in this vision, whom also was to come from the line of David.  This distinction reveals the fulfillment of the prophecies of Jesus’ birth (reference Luke 1 and Matthew 1 as is usually read during the time of advent).

The seemingly contradicting terms of David having “superiority” over Jesus as human (because of birth order) but Jesus also having lordship over David (because Jesus is God incarnate) is what is revealed here.  It is not a contradiction, but a fulfillment of prophecy as was foretold.  This kind of (in human terms) craziness is a clear sign that it is from God and Jesus is the Messiah (just like the virgin birth itself).

Furthermore, we see the reference to Melchizedek in verse 4, which is another mystery on its own…but to put it in overly simplistic terms: the “Order of Melchizedek” was God’s priestly presence on earth before Israel was a nation having its own priests.

Ultimately, David finishes this psalm with a foreshadowing of what is to come when Jesus returns not as Savior, but as Adonai, ruling the earth.  This is something we sing about in some Christmas songs, but is really reflected in Revelation.  David had not clue what would happen, only what he saw.  Likewise, John wrote the vision he saw which is now the conclusion of our bible and a foretelling of the end of days.

As we celebrate the coming of Jesus on earth this Christmas season, let us remember that it was only the beginning of the end.  The end of sadness, pain, and death.  The end of sin, corruption, and injustice.  Joy to the World!