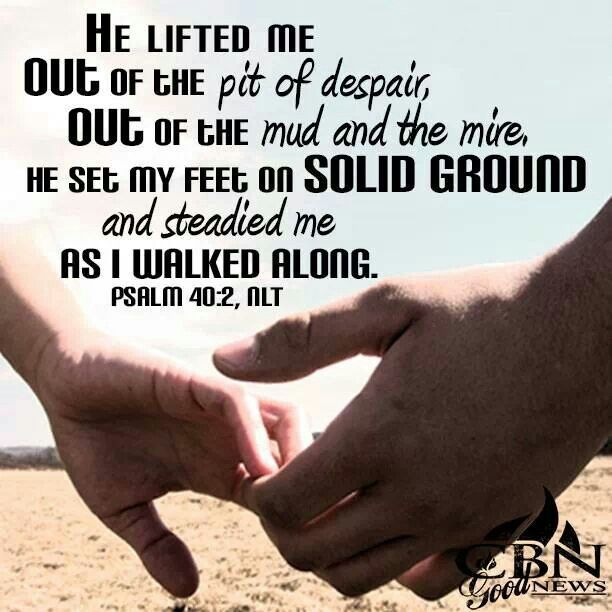 David is recognizing God’s faithfulness and goodness in Psalm 40.  We see here that after psalms of anguish, repentance, and persecution David recognizes that his own faithfulness has carried him to witness the goodness of the Lord despite all the things he has been going through.  This is good news my friends!  This is the great news of the gospel.  God is good all the time, even when we don’t feel good.  God is faithful when we are faithless.  God loves us when we feel unlovable and unloved.  Despite how David felt however, see how he maintained his hope in the Lord.

He waited patiently.  He didn’t cease to praise and worship God even though he thought his life was barely hanging in existence.  He cried out to the Lord (expectantly) that He would not smite David from the earth.  But instead was open, honest, and confident that the Lord would save and help him.  God restored him.  David continues to recognize the chaos around him, but also recognizes God’s goodness in the middle of the storm.  Jesus also taught this principle in Matthew 10:

22 “You will be hated by all because of My name, but it is the one who has endured to the end who will be saved. 23 “But whenever they persecute you in one city, flee to the next; for truly I say to you, you will not finish going through the cities of Israel until the Son of Man comes.  24 “A disciple is not above his teacher, nor a slave above his master. 25 “It is enough for the disciple that he become like his teacher, and the slave like his master. If they have called the head of the house Beelzebul, how much more will they malign the members of his household! 26 “Therefore do not fear them, for there is nothing concealed that will not be revealed, or hidden that will not be known. 27 “What I tell you in the darkness, speak in the light; and what you hear whispered in your ear, proclaim upon the housetops. 28 “Do not fear those who kill the body but are unable to kill the soul; but rather fear Him who is able to destroy both soul and body in hell. 29 “Are not two sparrows sold for a cent? And yet not one of them will fall to the ground apart from your Father. 30 “But the very hairs of your head are all numbered. 31 “So do not fear; you are more valuable than many sparrows. 32 “Therefore everyone who confesses Me before men, I will also confess him before My Father who is in heaven. 33 “But whoever denies Me before men, I will also deny him before My Father who is in heaven. 34 “Do not think that I came to bring peace on the earth; I did not come to bring peace, but a sword. 35 “For I came to SET A MAN AGAINST HIS FATHER, AND A DAUGHTER AGAINST HER MOTHER, AND A DAUGHTER-IN-LAW AGAINST HER MOTHER-IN-LAW; 36 and A MAN’S ENEMIES WILL BE THE MEMBERS OF HIS HOUSEHOLD. 37 “He who loves father or mother more than Me is not worthy of Me; and he who loves son or daughter more than Me is not worthy of Me. 38 “And he who does not take his cross and follow after Me is not worthy of Me. 39 “He who has found his life will lose it, and he who has lost his life for My sake will find it.

I am convinced that if David turned his back on God, his persecution would have lessened or possibly stopped altogether.  It was his quest to restore God as the center and king of Israel that resulted in his constant war and persecution he found himself in.  Yet he kept God at the center of everything: worship, lament, praise, petition, thankfulness, and adoration.  He didn’t care enough about his life circumstances to allow them to sway him to lose focus on God.  If only we could be so dedicated to our Creator.  Jesus’ teaching to His disciples in Matthew is exemplified by David.  David not only took up his cross and followed after God, but in fact took pride in that cross and recognized that his persecution was a result of his dedication to the Lord.  He saw things with Kingdom eyes and was able to see things the way they really were, not how the rest of the world saw them.

What circumstances do you find your self in today that warrant losing faith and hope?  How have you stopped waiting patiently on the Lord?  Why have you become dismayed in the goodness of God?  What has convinced you that God is no longer for you?  Keep your eyes focused on Him and you will see how good He really is!