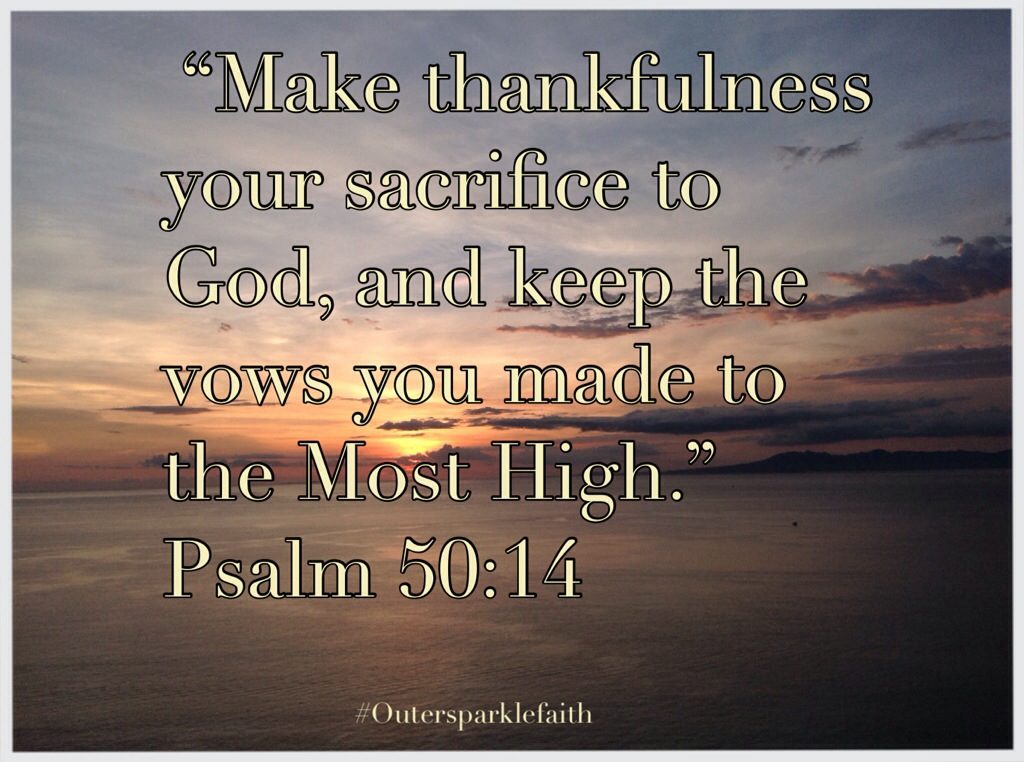 This psalm is divided into 3 parts: the presentation of God, God’s word to His people, God’s word to the rebellious.  Pay attention to how the psalmist describes God in all His glory.  It is interesting to note, if you have the time, to go to Revelation and compare how Jesus was presented to John many, many years later in the same form: fire, clouds, lightning.  He summons the earth: His words have complete control and He literally calls all of existence into order.  This isn’t like when we call someone on the phone and hope they will answer or when you tell your kids to do something and you expect them to listen to you.  The very authority in God’s voice forces the hearers to listen.  Jesus said that if man will not render to God the glory that He deserves, He can make the rocks sing in worship.  That’s power!  It’s crucial for us to recognize this about God.  Too often we minimize our view of Him and reduce Him to a super-human, not fully comprehending who He truly is in relation to us and everything else around us.

Once God is presented we see Him speaking to His people.  He reminds them who He is and then says, “look, I’m not going to correct you on your sacrifices, for I appreciate them.  But your heart is in the wrong place.”  As humans, we constantly battle the temptation to try to “be like God,” which was the first temptation.  In this way, God is revealing to His people that He doesn’t need their sacrifices.  Sometimes we look at our worship as something God needs or that if we didn’t believe in God, He wouldn’t exist.  Maybe on the surface we would never say that or even admit that it is how we think, but it is certainly how we behave!  He’s reproving His people for thinking He needs sacrifices and worship.  The truth is, He deserves it and He will get it one way or another (hence the singing rocks)!  In His reproof of His people, God reveals how little we think of Him.  He created the universe by speaking it into existence!  Do you really think that He needs us to slay a few animals in His name?  Sacrifices are to be a physical representation of our heart condition: repentant, pure, and seeking the Lord.  This is why He ends this section by revealing what He wants us to sacrifice to Him: thanksgiving, promises, and troubles.  He wants us to thank Him for His goodness, to obey Him, and to seek Him when we find ourselves in trouble.  This is more important than any slain animal ritual; otherwise, we’re just wasting blood!

Next we have God’s address to the heathens or “wicked”.  He reveals their sinfulness and hypocrisy but not as a condemnation.  Rather, God simply confronts them by logically explaining why they are considered wicked.  In verse 21 He reveals the true nature of sin, “you thought I was just like you.”  Although we are created in God’s image, let us not confuse the idea with thinking that God is made in our own.  While we are to be a reflection of God, the characteristics of humans don’t necessarily reveal the characteristics of God.  In the movie Fight Club the two main characters have a conversation about what they think about God.  They conclude that since their fathers are supposed to be the human representation of God and their fathers left them, then God has abandoned them as well.  To directly quote their conclusion, he says, “If our fathers don’t love us, then God doesn’t love us.  In fact, God probably hates you.”  We run this danger of reducing our idea of God to that of humanity and it is a grave mistake.  It becomes a huge stumbling block in our relationship with Him because all of these failures of humans are a result of sin and God is not sinful.  Everything that human beings do that is selfish, egotistical, painful, unthoughtful, inconsiderate, and unloving have nothing to do with God and He certainly does not exist in those things.  God says, “I’m telling you plainly so you can see your errors.”

When we read this section to the wicked, it is easy to consider that God is “talking to them” and we shake our heads in agreement with God’s condemnation of them.  However, let us take heed to read through it to expose our own wickedness!  Instead of being the Pharisee who beats his chest at the altar and prays, “thank you God that I’m not like these sinners,” let us recognize our own sinfulness and say, “you are right Lord, please forgive me!”  The psalm ends with an offer of repentance.  It is not just towards “His people” but to all that have been addressed in this passage.  He reveals the secret to life: offer thanksgiving to God and straighten yourself out.  God receives the humble but rejects the proud.  Which will you choose to be today?