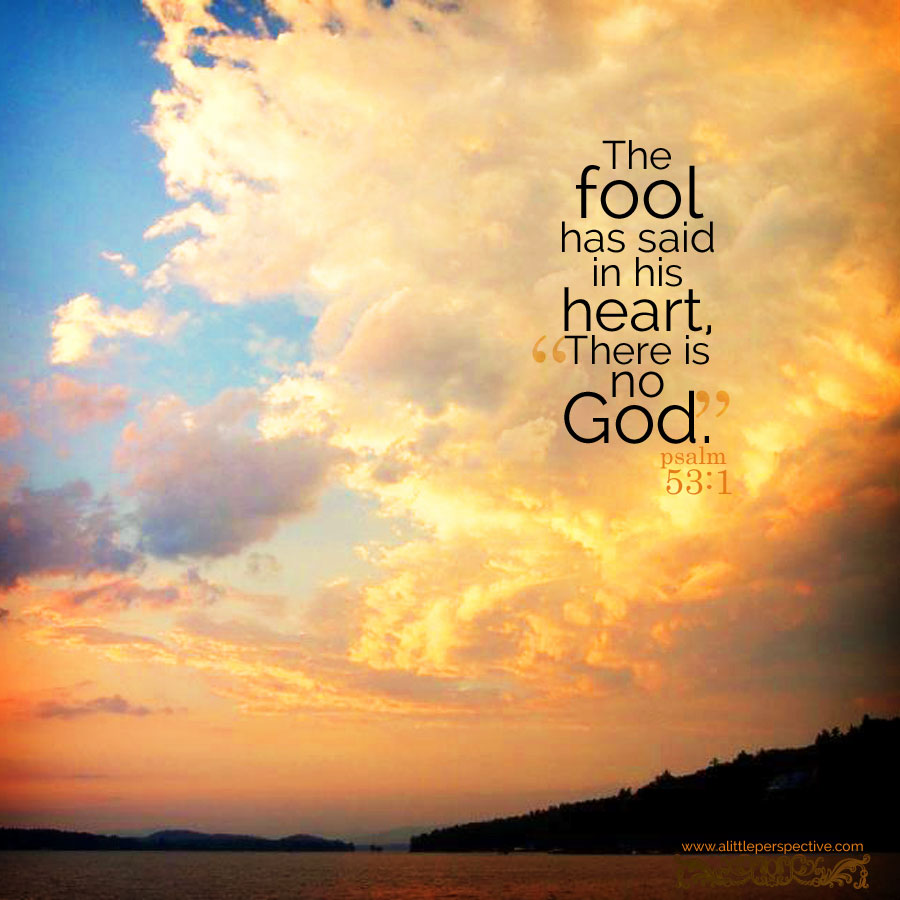 Man is a wicked beast.  Left to our own devices we destroy each other and ourselves.  We are born with an inheritance of sinfulness and continue in that sinfulness until we are introduced to a better way of life.  As David points out in Psalm 53, it is foolish to think there is no god, because it perpetuates our own ruin.

This psalm has a contested purpose.  It is very similar to Psalm 14, if not almost identical (in the English version) save a few musical annotations noted in the original writings.  Some say it seemed so important to the organizer of the book of Psalms that they wanted it in twice.  Others argue that David wrote it twice for two separate occasions.  Regardless of the reason why it is here, we encounter this theme once again of the foolish sinfulness of mankind.

David is crying out for the message of salvation, the good news of God’s grace and mercy, be flowed out from His people.  In 1 Corinthians 1, the Apostle Paul talks about it this way:

18 For the word of the cross is foolishness to those who are perishing, but to us who are being saved it is the power of God. 19 For it is written, “I WILL DESTROY THE WISDOM OF THE WISE, AND THE CLEVERNESS OF THE CLEVER I WILL SET ASIDE.” 20 Where is the wise man? Where is the scribe? Where is the debater of this age? Has not God made foolish the wisdom of the world? 21 For since in the wisdom of God the world through its wisdom did not come to know God, God was well-pleased through the foolishness of the message preached to save those who believe.

As Paul continues his treatise on the foolishness of mankind vs. the wisdom of God, he points out that even Jews struggled to fully see God’s salvation in their lives and continually returned to the mindset of their human nature instead of embracing their spirit nature given by God Himself.  Too often we get caught up in the “old covenant” thinking of trying to be righteous by fulfilling a set of rules and therefore being holy and set apart of our own accord.  However, we simply cannot.  We can only justify ourselves according to human standards, which never quite reach that of heavenly standards.  Jesus, however, flipped the switch on that when He died for us.

Instead of holding over our heads the list of rules we simply cannot complete to the fullest, He fulfilled it for us and then gifted us with the power that resulted.  Living by the law is a process that happens from the outside in.  Jesus exhorted the Pharisees when speaking as recorded in Matthew 23:

Jesus’ grace upon us through His sacrifice actually cleans the inside of the cup first, even if the world sees a dirty cup from the outside, He is working on the inside to create a pure heart.  As this transformation continues, then we begin to see the lasting result on the outside.  This is the great miracle that transpires between the old and new covenant: instead of being condemned by the Law we are empowered by Christ to fulfill it.  Unfortunately, we continually try to work under the old covenant and live under its oppression and all that ensues because we want to try to “be like God,” even though He has already made us to be like Him through Christ!