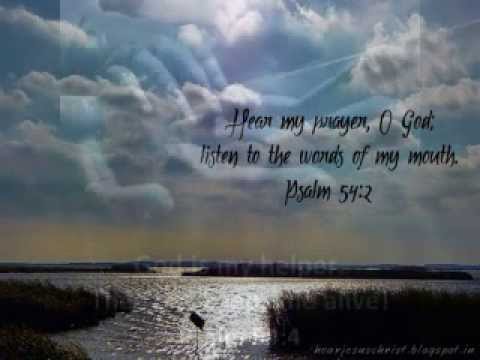 In Psalm 54, David finds himself surrounded by enemies.  He calls out to the name above all names to save him.  However, David’s security does not falter.  We can easily begin to read this psalm as one out of desperation, but starting in verse 4, we see his confidence in the sovereign God of the universe, not in his own abilities as a man.  He recognizes his own frailty but also the awesome power of the true King.

David understood that those who do not seek and follow God are destined for ruin.  This is why he was so secure in God coming to his aid.  It wasn’t because he was a holy man, but because he understood how the Kingdom of God operates.  It is the unshakeable kingdom and nothing formed against it will prosper.  These men who were seeking to kill him were not of the Kingdom and therefore would be destroyed.  David also understood that the principles of God’s Kingdom do not waiver or change, which is why he is so certain in verse 5.  He is not commanding God what to do, he is confident of what God will do.  Are you just as confident in God’s Kingdom?

The bible counts David as a man after God’s own heart.  This doesn’t just mean that God was pleased with him or that he was perfect.  It means that he constantly sought to transform his own heart to be like God’s.  His ultimate desire was to live under God’s reign here on earth as it is in heaven.  He wanted God to reign in his heart.  As the Apostle Paul wrote, “it is not I who live but Christ in me.”  This is what Jesus was referring to when He said, “if you want to save your life, you must die.”  In other words, we must lay aside our own desires and preferences and pick up God’s.

David knew this is what he was doing to the best of his ability and knew he would be saved.  In verse 6 David claims his willing sacrifice to the Lord.  He isn’t talking about a bull or dove or lamb, but his own life.  He was offering himself as a living sacrifice for whatever end God wanted to accomplish through him, knowing that God’s perfect will was the best option for his life.  This is what Paul wrote in Romans 12:

So then, let us seek God’s Kingdom first and foremost today with more fervor and conviction than ever before, knowing that His will is what is best for us and His Kingdom is the most secure for our lives.