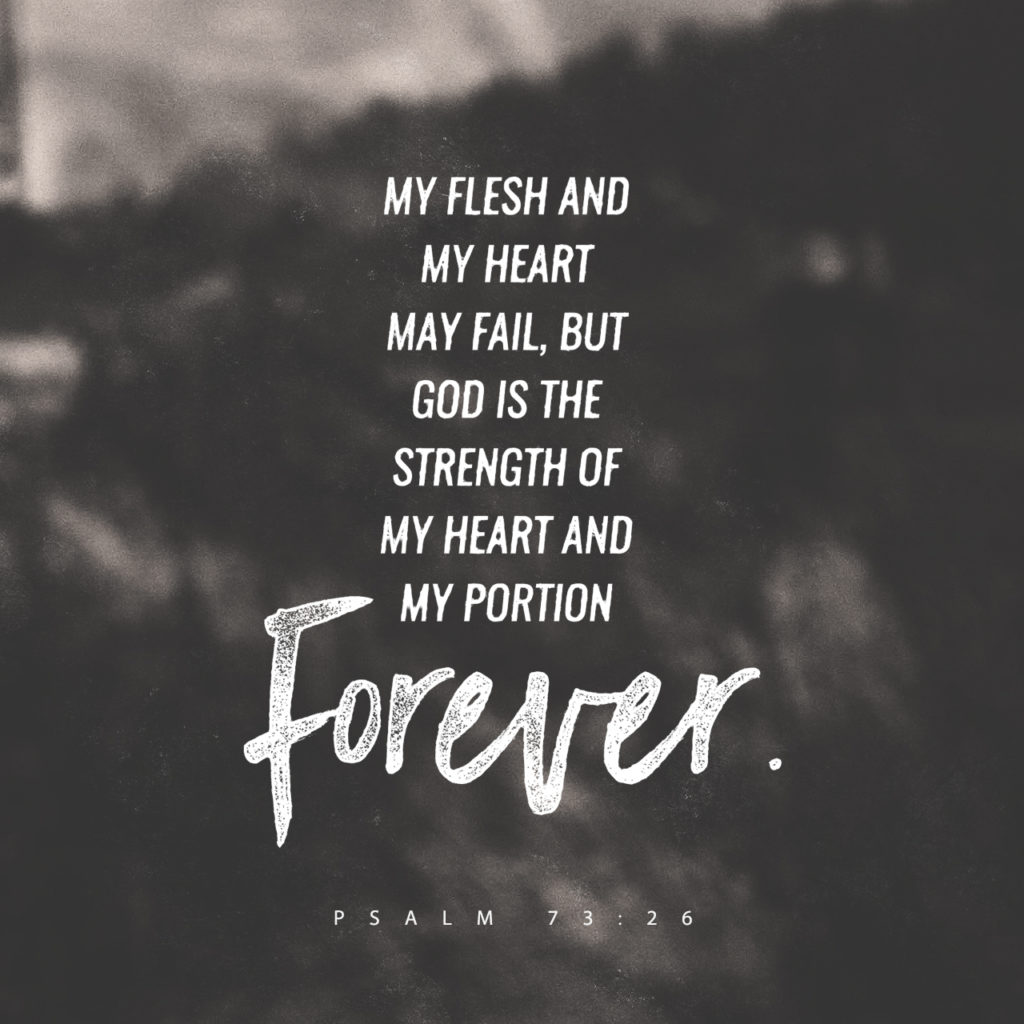 Although verse 26 is the most popular out of the whole of Psalm 73, I’m happy to be reading it in context today because I think it gives a greater perspective and more power to what it is referring.  Written by Asaph, this psalm could very easily be seen as a lament, but it is more of a recognition of God’s justice.

I think we can all relate to verses 3-12.  It’s easy for us to look around us and see the corruption of mankind and get frustrated when the evil and corrupt seem to be doing better than the just and righteous. It’s not fair!  What’s the point?  The psalmist begins by saying, “I almost slipped and stumbled,” and reveals how when we get to verse 13 by questioning why he has worked so hard to stay holy.  The world is fat with greed, gluttony, and a host of other sins and while those of us who are trying to not fall into those traps are struggling, they look at us and say, “what’s the point? Look at me, I’m fat and happy.  Come join me and stop restricting your joy and happiness!”  Later we will see Jesus fasting in the wilderness when Satan tempts him with bread and the whole kingdom of the world.

It’s not easy, as Asaph reveals in verse 16.  It is difficult to grasp on a daily basis when we try to be God honoring in a world that has rejected Him.  It isn’t easy when you are trying to live a life set apart for the Kingdom and the world tries to convince you it is pointless.  It’s actually quite mind boggling when you renew your efforts to be more holy and the whole world seems to come against you in that effort.  Yet corrupt politicians get richer, murderers get away with their crimes, and the law of the land seems to be more about destroying others’ lives just to get a little further ahead.  What gives?  Have you ever prayed that prayer to God?  Have you ever questioned His righteousness and “plan” and His love towards His children as you see the depth of evil that surrounds us?

The key here, my friends, is in verse 17, when He enters the presence of the Lord and is awakened by the Truth.  As we wrestle with the realities of a broken world, the depth of the effects of sin are beyond our own comprehension.  The “big picture” cannot be seen with our physical eyes or understood with our human minds.  It takes an encounter with God to transcend humanity’s brokenness and see things from His perspective.  This is where we get clarity and this is where the psalmist was able to finally see the purpose in his holy living.

When Jesus preached His sermon on the mount, he mentioned various times that people who do things for outward appearance “have already received their reward.”  In other words, when our focus is recognition, status, social power, and physical prowess, that is what we get but that’s also allwe get.  The reward ends there.  When you die it doesn’t matter.  Furthermore, quite frankly in the greater scheme of things, it doesn’t matter a whole lot on this earth either.  There will always be someone stronger, faster, smarter, sexier, bigger, smaller, richer, wiser…the list goes on.  But when we are in God’s presence, none of that matters because He is with us and that is greater than any status level we could achieve in man’s eyes. Why do I need to be recognized my mere mortals when the God of all creation takes me by the hand and calls me His? Furthermore, what does it matter what “they” have when I have Him?