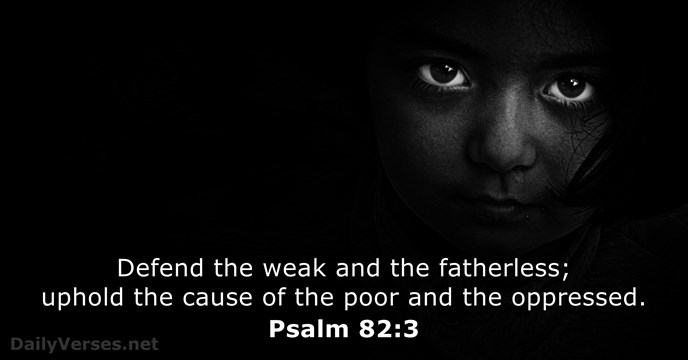 Psalm 82 is an interesting text in that there is a mixture of interpretations and meanings derived because it is an address to the spiritual realm in its interaction with the physical.  As the psalmist mentions the “gods” he is referring to angels and spiritual beings, which tend to be more powerful than us humans.  However, it should not allow us to ignore what is being said here.

The scene portrayed here of God as the high council surrounded by His government needs to bring upon a reminder of who He made us to be: rulers over the earth.  As sin entered the world, we surrendered that authority to the devil and through Jesus, God has given it back to us.  That is why some folks say that this passage is a prophetic message of the rule of Christ through us on the earth…especially with references to “sons of the Most High.”  This also applies to angels and especially with the reference in verse 7 about falling like the princes, which is speaking about Lucifer and the fallen angels that followed him.  We actually reference this in discussing who the Nephilim are in episode 8 of the Real Church Talk podcast!

In looking at how this applies to us, let’s focus on what God’s important point is: vindicate the weak and fatherless; do justice to the afflicted and destitute.  Does this sound familiar?  James 1:27 says,

I had a friend who after getting his lawyer credentials and working as a defense attorney for a short time, decided to become a prosecutor.  I asked him why he switched and he said that as a prosecutor, he has more power and authority to dismiss cases and drop charges against those who aren’t really guilty.  Let’s take that to a spiritual context.

If God is the judge and ruler over all and He gives us authority to rule over the earth, then He has commissioned us with the power and responsibility to protect those who are underprivileged and not really guilty.  Even if the world brings charges against them, we are able to defend them with this power.  Jesus revealed this in Matthew 16 when He said:

Later we see him repeat this concept in Matthew 18 when instructing the disciples how to implement a correction in the church:

So then, we should take heed to the words of Psalm 82 which speaks to not only the angels of the spiritual realm but the sons of God who live in the physical realm.  We have been given access to great power and authority which comes with great responsibility.  The day that you answer to God, will He say that you wielded it in a way that reflects His love?