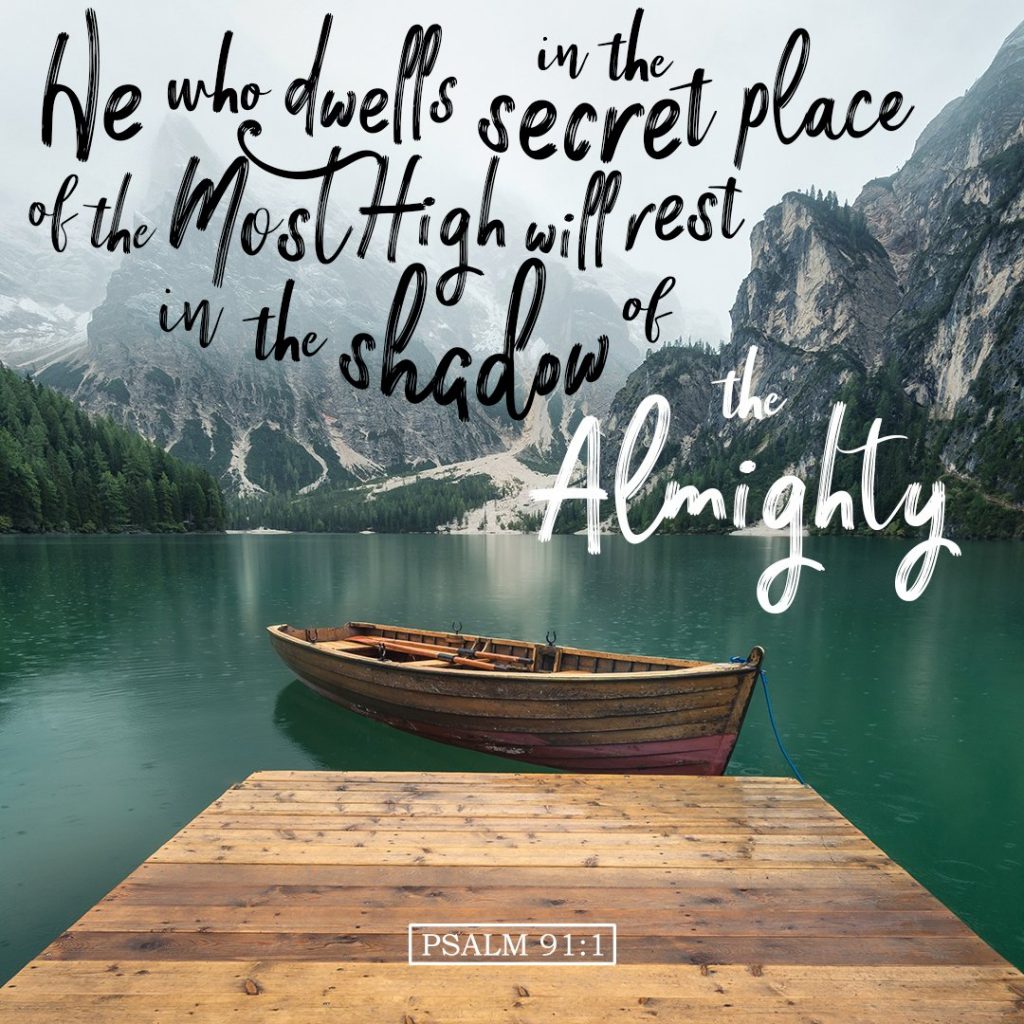 Wow, if this isn’t an encouraging psalm to you, then I don’t have much else to give you!  Psalm 91 is essentially a promise from God.  It’s one of those “if you do this, such-and-such will happen” passages where we must pay close attention to what is being communicated here.  What really struck me was the first two verses.  While they set the tone for the whole passage, it’s important we don’t just shout it from the rooftops as a battle cry.  Look at what the very beginning says:

He who dwells in the shelter…

This means the shelter of God (The Most High).  This refers to actively seeking out shelter and going under it.  I imagine it as when I see folks walking outside and suddenly a rainstorm hits and everyone runs for shelter.  Or maybe a better picture is during a thunderstorm you see groups of motorcyclists parked and waiting out the storm under an overpass.  These folks seek out shelter from the storm.  Now, what if the overpass started to move?  Would the motorcyclist stay put and allow the shelter to move away and not stay under it?  Or would they try to keep up and move with the overpass?  Maybe you are thinking that we have a solution for that: umbrellas!  But what about a hailstorm?  These are all metaphors, of course, for the storms of life.  But wait, I haven’t even finished reading verse 1 yet…

…the shadow of the Almighty.

When we seek shelter, we are in the shadow.  Perhaps on a hot summer day, this might be appealing, but how many of us have felt like we are living under a shadow for way too long?  Would it make a difference to you to know whose shadow you are under?  When we seek the shelter of the Lord, the shadow is cast by the one protecting, like a mother hen protecting her chicks (see Matthew 23:37).  It is only comforting if we actually trust the Lord, and the shadow isn’t caused by God checking in on you because you’ve been a belligerent child.  I think we’ve all experienced that shadow in our lives whether it was from an observing parent, a concerned teacher, or someone else in our life who is concerned for our well-being and notices we are up to no good.  We see this kind of shadow mentioned in verse 8, towards those who come against the Almighty’s children while they abide under His protection.

We have a choice to abide in Him or not.  John 15 speaks directly to this as Jesus instructs His disciples to not just follow His instructions once He leaves the earth, but to literally abide in Him.  He uses the imagery of grafting branches into a vine.  When we do this, God will give His angels charge concerning you.

I just finished listening to a sermon that touches on human interactions with angels and the belief some have about every person or child having a guardian angel.  We see here that this only happens once we abide under the wings of God, not when we decide to do whatever we want outside of God’s will.  Even Jesus refused to test this theory when Satan tempted Him to throw Himself off the high point so the angels would catch Him.  Jesus abided in the Father and therefore knew that throwing Himself off the pinnacle was not in the Father’s will.

When we abide in God, we know everything will be taken care of for us and about us.  The key, my friends, is in actually seeking out God’s shelter and staying there, following Him as He guides us through the storm.