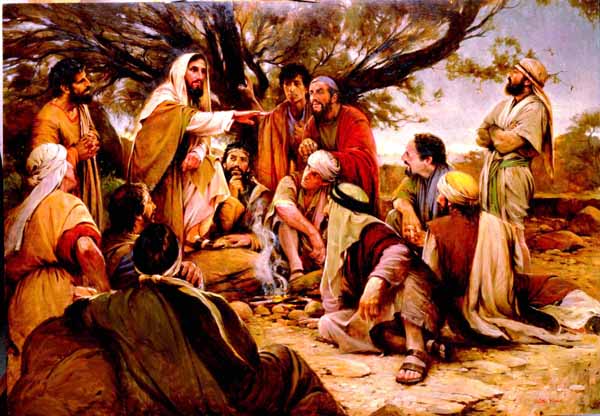 Acts 1:12-26
12 Then they returned to Jerusalem from the mount called Olivet, which is near Jerusalem, a Sabbath day’s journey away. 13 When they had entered the city, they went up to the upper room where they were staying; that is, Peter and John and James and Andrew, Philip and Thomas, Bartholomew and Matthew, James the son of Alphaeus, and Simon the Zealot, and Judas the son of James. 14 These all with one mind were continually devoting themselves to prayer, along with the women, and Mary the mother of Jesus, and with His brothers. 15 At this time Peter stood up in the midst of the brethren (a gathering of about one hundred and twenty persons was there together), and said, 16 “Brethren, the Scripture had to be fulfilled, which the Holy Spirit foretold by the mouth of David concerning Judas, who became a guide to those who arrested Jesus. 17 “For he was counted among us and received his share in this ministry.” 18 (Now this man acquired a field with the price of his wickedness, and falling headlong, he burst open in the middle and all his intestines gushed out. 19 And it became known to all who were living in Jerusalem; so that in their own language that field was called Hakeldama, that is, Field of Blood.) 20 “For it is written in the book of Psalms, ‘LET HIS HOMESTEAD BE MADE DESOLATE, AND LET NO ONE DWELL IN IT’; and, ‘LET ANOTHER MAN TAKE HIS OFFICE.’ 21 “Therefore it is necessary that of the men who have accompanied us all the time that the Lord Jesus went in and out among us- 22 beginning with the baptism of John until the day that He was taken up from us-one of these must become a witness with us of His resurrection.” 23 So they put forward two men, Joseph called Barsabbas (who was also called Justus), and Matthias. 24 And they prayed and said, “You, Lord, who know the hearts of all men, show which one of these two You have chosen 25 to occupy this ministry and apostleship from which Judas turned aside to go to his own place.” 26 And they drew lots for them, and the lot fell to Matthias; and he was added to the eleven apostles.

A couple interesting things are revealed in today’s passage.  We learn that Jesus’ disciples continued to live in community after He ascended.  We also come to understand that God had a purpose for Judas’ deception in leading the Romans to Jesus in order to crucify Him.  We also get to witness the God appointed process of apostleship.

Christian Community
Luke makes a seemingly peculiar note of detail that the women took part in whatever the disciples were doing.  During Jesus’ time on earth, He revealed the importance of women and how they should be valued in society.  Until then, women were deemed lesser beings, but Jesus began the revolution of empowering women and showing the world that they are no lesser than men.  Jesus showed partiality to women and here Luke details how the disciples continued this “new tradition”.  Usually, women were separated from the men during mealtimes and other events in life.  Here, however, the women were included in every part of life and Jesus’ mother was one of them.

The Purpose of Judas
This passage is where we learn that not only was Judas an integral part of the crucifixion of Christ, but he was part of God’s plan all along.  I think we have difficulty accepting this because just like when Peter sliced the ear of the soldier trying to take Jesus away, we feel we need to defend Him as if He cannot take care of Himself.  Jesus’ response was a quick, “get behind me satan.”  How often do we let our pride of our God get in the way of realizing His true purpose and plan?  It doesn’t always make sense to us because sometimes we lose sight of the spiritual implications of things and look at situations from a purely humanistic viewpoint. The quotes from the Psalms are prayers from King David when he was crying out to God about his persecutors.  Luke here is recalling these prayers as indication of Judas’ role in Jesus’ death.

Appointment by God
I’ve heard people argue against Godly appointment before in regards to the Apostle Paul, whom was confronted by Jesus in the Spirit on the road to Damascus.  Here, we see a form of selection in a way similar to drawing straws.  How can we know for sure if these men were elected by God for these positions?  In a few chapters when the religious elite of the day ask this same question, we will read the statement of Gamaliel, a respected Pharisee and teacher of Paul, declare that if what men do is appointed by God, there is no way we can counter it and if it is merely of men, then they will fade away.  Our issue with Godly appointment is that we have problems trusting God; instead we are controlled by our distrust of man.  Even if we cannot bring ourselves to trust people like Judas, we can at least trust that God is in control.