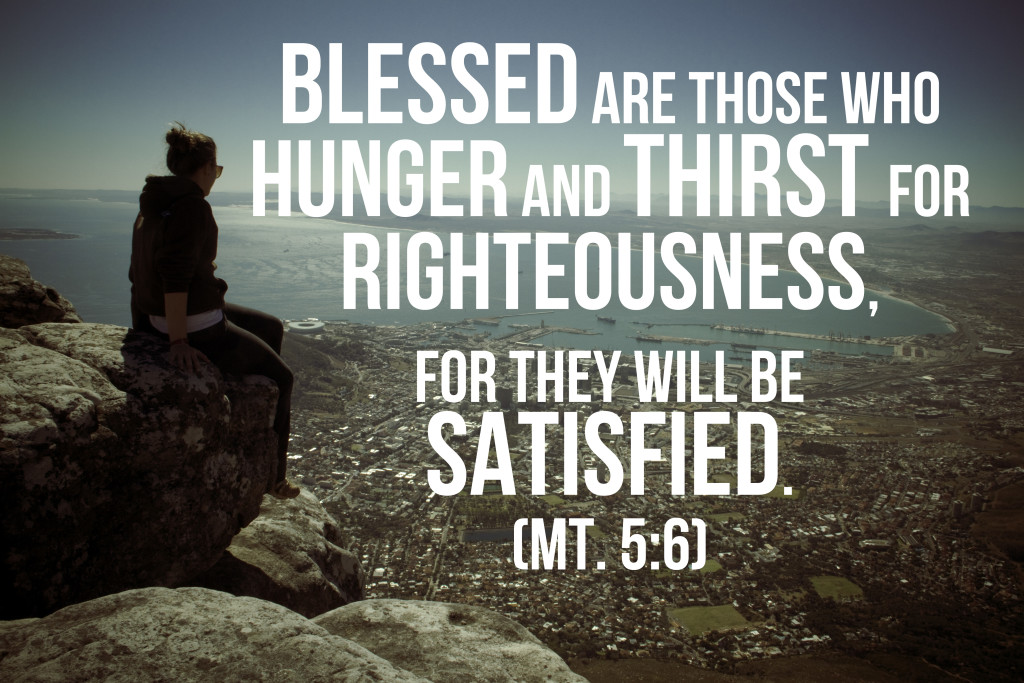 Matthew 5:6
6 “Blessed are those who hunger and thirst for righteousness, for they shall be satisfied.

It is interesting to note that in seeking righteousness, we fulfill it. We read throughout the Old Testament that it was impossible to fulfill the old covenant with God, yet there were still some people who were considered holy and righteous. These were men who still sinned and made mistakes, but they continued to seek out God’s righteousness and sought to fulfill His will in their lives despite their fallibility.

Abraham doubted God and lied throughout his journey yet he became faithful enough to willingly sacrifice his own son and it was accredited to him as righteousness (Romans 4:9). David was guilty of adultery and murder, yet he was a man after God’s own heart. Israel continually disobeyed God’s precepts, yet they are still His chosen people. The list goes on and we see that despite the failures of these people in history, they were still considered friends of God. This is because of what we read in Romans 4:

13 For the promise to Abraham or to his descendants that he would be heir of the world was not through the Law, but through the righteousness of faith.

Our righteousness doesn’t come from our actions (because in that manner, we all fall short). Paul would say it to the Ephesians later that we are saved by grace through faith. We don’t deserve communion with God…better yet, we simply cannot live in communion with God because of our unholiness and unrighteousness. But, He has given us a way into His presence through His grace and if we believe in that grace (faith), we will receive His righteousness to live in His presence.

It is our desire for righteousness, not our achieving of it, that grants us His righteousness because we are seeking it. If we are truly seeking God’s righteousness, then He will give it to us. He tells us to be holy and righteous, but knowing we cannot achieve it on our own, He meets us where we are and grants us that righteousness so we can be considered children of God. A great example of this is the Apostle Paul (at the time, Pharisee Saul) who thought He was doing the right thing by arresting and killing off Jesus’ followers. We can see, however, that he was seeking God’s righteousness because the moment God confronted him, he changed his ways. If he was seeking his own righteousness or doing it for himself, he may not have changed (although an encounter with God is quite powerful). Paul immediately repented of what God showed him was wrong and completely gave himself over to Christ. Even though he was arresting people and authorizing their death, he was still seeking righteousness and he found it. Even though he was making mistakes at full speed, God still honored him because of his hunger and thirst for righteousness. He was satisfied in it because God gave it to him.

There are two sides to the “righteousness” coin: God gives it to us freely so we can do whatever we want or there is no way we can get it so why should we try? Both of these are lies from the devil because he doesn’t want us to receive this righteousness. He lost his chance and now he is trying to get us to lose ours. Don’t be dismayed. Don’t be deceived. God has His righteousness ready to pour out upon us so we may walk in it afresh if we would only hunger and thirst for it. We don’t deserve it, we cannot earn it, but it is available to us if we want it.

Lead Us To Righteousness – Polen