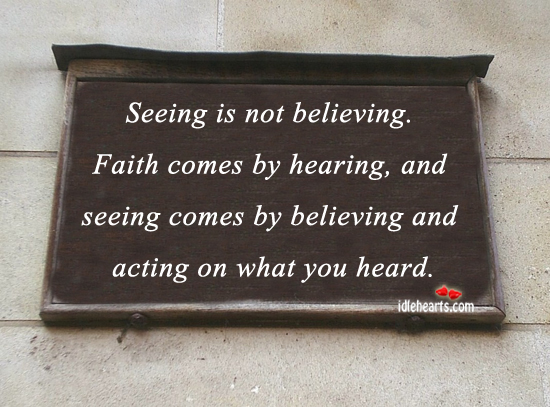 Acts 12:12-19
12 And when he realized this, he went to the house of Mary, the mother of John who was also called Mark, where many were gathered together and were praying. 13 When he knocked at the door of the gate, a servant-girl named Rhoda came to answer. 14 When she recognized Peter’s voice, because of her joy she did not open the gate, but ran in and announced that Peter was standing in front of the gate. 15 They said to her, “You are out of your mind!” But she kept insisting that it was so. They kept saying, “It is his angel.” 16 But Peter continued knocking; and when they had opened the door, they saw him and were amazed. 17 But motioning to them with his hand to be silent, he described to them how the Lord had led him out of the prison. And he said, “Report these things to James and the brethren.” Then he left and went to another place. 18 Now when day came, there was no small disturbance among the soldiers as to what could have become of Peter. 19 When Herod had searched for him and had not found him, he examined the guards and ordered that they be led away to execution. Then he went down from Judea to Caesarea and was spending time there.

A couple years ago I read a book called Sun Stand Still by Stephen Furtick.  I know he has recently gained some attention about how he runs his church, but I encourage you to read the book regardless of how you feel about him.  It is a book that talks about the audacious faith of Joshua, based in his prayer for the sun to stand still in the sky during a battle so that they could finish and win.  One of the points Furtick points out in the book is how often we pray and ask God for things but don’t believe it when He answers our prayers.  What’s the point of asking if you don’t think your question will be answered?  Not too long ago I also watched the movie The Preacher’s Wife about a burnt out pastor whose family is ready to fall apart.  The pastor asks God for help and when He sends an angel to help prioritize his life and help where things have become overrun, the pastor laughs at the angel.

It seems foolish, yet we do this every day.  We do it with each other.  I fall into the trap sometimes of asking my wife if she needs help with something just to be nice but expecting her to say, “no”.  When she responds by asking me to do something for her, I’m surprised because I didn’t expect her to actually answer the question!  How many times do you ask a question that you do not expect an answer for?  Or better yet, how many times do we ask a question but expect a negative answer in return?  How about when we send out birthday party and wedding invitations to family members we don’t expect to show up (and maybe don’t want to show up)?  What is your response when they do?

In verse 5, we read that prayer for him was being made fervently by the church to God.  Why did they not expect Peter to show up?  Certainly, by worldly standards nobody expected Peter to show up, but with God’s influence it should have been expected.  I think sometimes in our prayer life we get into the habit of giving thanks and making our petitions and that is it.  We don’t actually have a conversation with God about what is happening, how we should proceed, and what we should expect.  After all, this is what Jesus exemplified in what we call the Lord’s Prayer.  I’m not going to break down the entire prayer in this post, but if we read it for what Jesus is teaching (the Lord’s Prayer is the result of the disciples asking Him how they should pray), we can see that there is more than just praise and petition.  There is a desire to understand and know God more.  If the church’s prayers revolved more around this, they might have better known what was going to happen to Peter.

Why do we always try to explain away God’s miracles?  The very people that were asking for God to release Peter didn’t believe he was released.  Peter was even surprised that it wasn’t just a dream!  When Peter arrived at the house, they were more convinced it was Peter’s angel (as if he was already dead even though they were praying for his release), than it actually being him.  Why are we so unbelieving in God’s providence?  Why is it easier for us to believe that God won’t fulfill our prayers instead of actually giving us what we ask for?  In Matthew 7, Jesus teaches us the importance of asking and trusting in God’s provision:

7 “Ask, and it will be given to you; seek, and you will find; knock, and it will be opened to you. 8 “For everyone who asks receives, and he who seeks finds, and to him who knocks it will be opened. 9 “Or what man is there among you who, when his son asks for a loaf, will give him a stone? 10 “Or if he asks for a fish, he will not give him a snake, will he? 11 “If you then, being evil, know how to give good gifts to your children, how much more will your Father who is in heaven give what is good to those who ask Him!

I know that there is always a thought lingering in the back of our minds about this because God doesn’t always seem to answer our prayers.  We might ask to win the lottery, that our family member be healed of an illness, or that we get the job.  “Why then doesn’t God follow through on these?  This is why I don’t believe He won’t answer my prayers, because He doesn’t!”  We must understand something very crucial to this passage.  God will only give us what is ultimately good!  In the analogy that Jesus uses about a father that wouldn’t give his son a stone or snake in place of fish or bread, He is explaining the goodness of earthly fathers to accentuate the supreme goodness of our Heavenly Father.  What if the son asks for a snake, would the father give it to him?  Too often we ask for the things that are not good for us and therefore are not in accordance with God’s will for us to have because it isn’t good.

This is a difficult situation for us because from our perspective, we are only asking for what we think is good.  I’m sure, however, that a drug addict asking for another hit thinks it is good as well.  An alcoholic asking for another shot seems like a good idea, doesn’t it?  But those who have a different perspective, a cleaner perspective, know that it isn’t good and if we love that person we will not give it to them, will we?  The same is true with God our Heavenly Father.  Just because we ask for it doesn’t mean it is the best for us and we must trust God to navigate that for us.  If we truly believe that God is omniscient and sovereign, then why shouldn’t we trust His judgment over our own skewed desires?  As we continue to learn His love and care for us throughout the scriptures, we will be able to see it in our own lives.  This is why I always loved the song Unanswered Prayers by Garth Brooks.  Look back in your life about the unanswered prayers; can you see where God’s perspective provided a better path for you by not giving you what you wanted in the moment?  In Bruce Almighty, the main character decides to just answer “yes” to everyone’s prayer requests.  We learn the next day, however, that this wasn’t necessarily the best approach because it didn’t provide the most possible good.

Prayer isn’t just about throwing things into the sky and expecting God to listen and comply.  It isn’t just about complaining about how horrible your life is and getting angry with God for how much you are suffering.  It is about building your relationship with God so you can better understand His will for your life.  It is in this process we are able to live more in His peace that surpasses all understanding because we understand His will and conform to it.  As we contemplate Jesus’ death, burial, and resurrection this weekend, let us not forget Jesus’ conformation to the Father’s will instead of His own in Luke 22:

41 And He withdrew from them about a stone’s throw, and He knelt down and began to pray, 42 saying, “Father, if You are willing, remove this cup from Me; yet not My will, but Yours be done.” 43 Now an angel from heaven appeared to Him, strengthening Him. 44 And being in agony He was praying very fervently; and His sweat became like drops of blood, falling down upon the ground.

Jesus’ agony in this conversation with the Father was because He was trying to accept the Father’s will, even though it conflicted with His own.  He was about to do something He didn’t really want to do, yet He trusted in God’s perfect will and plan instead of complaining that He wasn’t getting His own way.  He knew what was to come, just like when we know a loved one is getting ready to die.  We know their life is fading yet we pray for God to miraculously heal them and that they just jump out of bed and run down the hall.  We are filled with grief knowing what is to come.  This is when we must pray, “yet not my will, but Yours be done.”  We seek God’s will and ask Him to conform us to it.  We seek His will and ask Him to break our own will so He will change our hearts in accordance with His.  This is how Jesus was able to withstand the mocking, beating, and the road to Calvary.  In the Garden of Gethsemane, Jesus’ will was conformed to the Father’s.  It is the only way He was able to accomplish the task, His purpose for being, and it is the only way we will be able to accomplish the task for which we have been created as well.