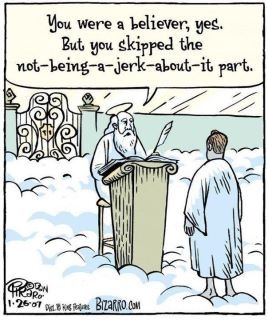 Acts 18:12-17
12 But while Gallio was proconsul of Achaia, the Jews with one accord rose up against Paul and brought him before the judgment seat, 13 saying, “This man persuades men to worship God contrary to the law.” 14 But when Paul was about to open his mouth, Gallio said to the Jews, “If it were a matter of wrong or of vicious crime, O Jews, it would be reasonable for me to put up with you; 15 but if there are questions about words and names and your own law, look after it yourselves; I am unwilling to be a judge of these matters.” 16 And he drove them away from the judgment seat. 17 And they all took hold of Sosthenes, the leader of the synagogue, and began beating him in front of the judgment seat. But Gallio was not concerned about any of these things.

Here we see a similar scene to when Jesus was brought before the courts by the Jews complaining that He was teaching contrary to the law.  Maybe Gallio knew what had happened to Jesus or maybe he just saw through the deception of the Jews and decided not to play into it.  Roman law had “approved religions,” Judaism being one of them, so the Jews’ complaint was twofold.  They were complaining that Paul was teaching something contrary to their own Mosaic Law (but presented it as though he was preaching against Roman law), and also that he was spreading a new and unapproved religion (which could have some ramifications if the judge decided that’s what happened).  By dismissing the case before even hearing it, Gallio simultaneously dismissed religious arguments as not being handled by the state as well as declaring that what Paul was teaching was allowed in view of the Roman law.  This is significant since Jesus just told Paul in a vision that he will not be harmed.

Interestingly, the crowd then beat the leader of this little revolt against Paul.  Some commentaries suggest that the Gentile onlookers were the ones to undertake this beating, but it actually makes more sense that the Jews whom were following him were the ones to do it.  They were upset that nothing happened to Paul!  Can you see how wrapped up in their own self-righteousness they were: they beat their own leader for a failed trial against Paul who threatened their belief system with his words.

In comparing this story to ourselves, it is easy for us to take the side of Paul.  But, how much are we like the Jews?  How often do we seek out to muffle God’s voice as a result of our own religiosity?  How many times do we blame and punish our leaders for failure without realizing they were acting contrary to God in the first place?  If any one of these Jews would have thought about their actions, their motives, and how they were behaving they wouldn’t have been angry with Sosthenes at all.  They would have realized that they were seeking out to avenge themselves and prove themselves right instead of God’s will.  Unfortunately, we quickly take the latter approach instead of the former.  We would rather quickly react to defend ourselves than shut up and listen to what others are saying in search of absolute truth.  We’d rather ignore parts of our “law” in order to defend it instead of comply with it fully.

2 thoughts on “Self Righteous Religiosity”